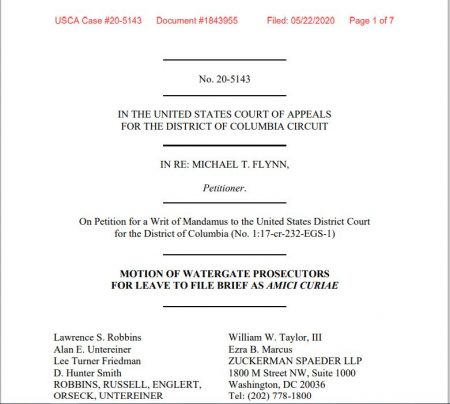 (May 26, 2020) — In the continuing saga of General Michael Flynn’s battle for justice, addressed here and elsewhere, the plot thickens even more.

First, last Saturday, Judge Emmet Sullivan hired a high-octane D.C. lawyer – Beth Wilkinson – to represent him in responding to the D.C. Circuit Court of Appeals order commanding him to respond to the writ of mandamus petition filed by Flynn’s lawyer, Sidney Powell.  There is a pretty good chronology and speculation here as to why he hired Wilkinson.  She has represented clients as diverse as individuals involved in the Hillary Clinton email scandal to advising Supreme Court nominee Brett Kavanaugh during his confirmation hearing.  It will be interesting to see how the Circuit Court panel reacts to Judge Sullivan hiring a lawyer to respond to its order directed personally to him.

Apart from the question of whether Sullivan’s retention of Wilkinson creates a conflict of interest, and whether or not Wilkinson is being paid (and if so, by whom), General Flynn’s lawyer has expressed concerns as to why Sullivan feels the need in any event to “lawyer-up” with Wilkinson.  And, as pointed out here, Wilkinson is apparently a close friend of Kathryn Ruemmler, former White Counsel to Barack Hussein Obama, Jr.  Ruemmler is colloquially known to be Obama’s “fixer.”  If Obama had a problem, Ruemmler would be tasked to “fix it.”  Few would deny that General Flynn has been a thorny problem in Obama’s side, so it would not be surprising if it were revealed that Sullivan may have hired Wilkinson because of the close “friendship” between her and Ruemmler.  Time will tell.

Second, in a transparent effort to get its views known to the Circuit Court before the ten-day mandamus petition response window imposed by the D.C. Circuit Court on Judge Sullivan expired, the “Watergate Prosecutors” filed on May 22, 2020 a “motion for leave to file amicus curiae brief.”  Appended to it, as required by the rules of court, was the proposed brief.

Not to be outdone, a similar amicus brief was filed by the Attorneys General of fifteen states in support of General Flynn and his lawyer’s petition for a writ of mandamus against Judge Sullivan.  As you might suspect, your humble servant finds the Attorneys General’s proposed brief to be far more persuasive than that of the Watergate Prosecutors…, but your faithful servant is not a judge.

That said, it is the Watergate Prosecutors’ brief that demands attention.  The Circuit Court order contemplates (a) one mandatory filing by Sullivan, and (2) one optional discretionary filing by the Justice Department.  It does not invite or authorize the filing of any additional briefs, including amicus curiae briefs by any other entities, including “renowned” lawyers from decades past.  The Circuit Court needs an avalanche of left-wing, Deep State amicus briefs like it needs another hole in the head.  If Flynn’s lawyer, Sidney Powell, is smart – pretty much a “given” at this point – she might be considering a motion to strike the Watergate Prosecutors’ brief in the near future.  Note that no order of the court has yet been entered allowing the “filing” of the proffered Watergate Prosecutors’ brief, so in lieu of a motion to strike, a response urging denial of the motion to file the brief also might be on the horizon.

Moreover, under Circuit Court Rule 29(a)(2), a “state” may file an amicus brief without leave of the court.  The Watergate Prosecutors, on the other hand, had to first submit a motion for leave to file their brief – and have the motion granted – before the brief can be formally filed and accepted.  Stated otherwise, the amicus brief of the fifteen states is already formally before the Circuit Court while the Watergate Prosecutors’ brief is still, as of this post, “pending.”

Interestingly as well, Circuit Court Rule 29(a)(4)(E)(iii) provides that a proposed amicus curiae – if not the United States, one of its officers or agencies or a state of the union – “must” (emphasis added) include, among other things, a statement in the proposed brief disclosing whether “a person – other than the amicus curiae, its members, or its counsel – contributed money that was intended to fund preparing or submitting the brief and, if so, identifies each such person.” (Emphasis added).

While that language can be read as meaning that, if no person or organization actually did contribute money for the purposes stated in the rule, no statement would be needed.  Still, with the stakes being what they are – and against the backdrop that the “going rate” for attorneys in Washington, D.C. for high-stakes work of this sort could range between $600 and $1,000 per hour…, or more – it strains credulity to posit that the amicus brief is being done for free.   Yes, Virginia, a $600/hour lawyer is charging you $10.00 per minute and a $1,000/hr. lawyer is charging you about $1.10 every 4 seconds.  A dollar slot machine would have difficulty keeping up.  Still, it is possible that the Watergate Prosecutors are undertaking this task without monetary assistance from anyone…, maybe.

Do not waste your time or energy, faithful P&E readers, searching the Watergate Prosecutors’ amicus curiae brief for that statement of disclosure, because none is included.  The case docket shows that there was a “supplement” filed by the Watergate Prosecutors shortly after their motion for leave was filed last Friday, but that document was an “Appendix” listing short biographical sketches of the persons signing on to the brief.  It was not a disclosure statement under the noted rule which had been “inadvertently” omitted.  Interestingly, one of the signers on the brief – one Gerald Goldman – lists in his bio sketch that he once served as the Vice-Chair of the District of Columbia Legal Ethics Committee.  It would be interesting to know what his views are on the seeming myriad transgressions of the federal “Code of Conduct for United States Judges” by Judge Sullivan.

Against this backdrop, three questions emerge: (1) was the failure to include the disclosure statement in the original draft brief a mere “inadvertent omission,” innocently “overlooked” by the wise and omniscient Watergate Prosecutors; (2) was it consciously not included because it would reveal, for example, Deep State involvement in the effort to keep the Flynn persecution – that term is not a typo – alive indefinitely, perhaps until November 3, 2020; or (3) was it believed by the Watergate Prosecutors that one was not necessary because of their previous “Watergate” experience or because no third-party monetary payments were made?  Clarification on this point would be helpful.

Here’s a thought: maybe before moving to strike the brief or urging the denial of the motion for leave to file, Sidney Powell might want to consider seeking an “order to show cause” why the omission of that statement – if monetary payments to support the preparation and filing of the brief were made by third-parties – should not result in the striking of the brief.  Maybe she could even conduct some “discovery” prior to the order to show cause?  Who knows:  in order to avoid that briar-patch, maybe the Watergate Prosecutors would voluntarily withdraw the brief.

Nah… that would send a really bad message.  Remember what Obama said: “The only people who don’t want to disclose the truth, are people with something to hide.”  Memo to the Watergate Prosecutors: be careful what you wish for.  If there is nothing to hide from the Circuit Court regarding the folks – if any others than you – contributed money to the project, then prepare and file the Rule 29(a)(4)(E)(iii) statement confirming that fact in supplementation of the proposed amicus brief.

One other point bears mention.  In the Watergate Prosecutors’ notice of intent to file the brief submitted to Judge Sullivan, there was included a “Statement of Interest” which, although not included with the proposed amicus brief in the Circuit Court (a different statement of interest is used), is interesting.  It states,  among other things, that the “Watergate scandal exemplified how unchecked political influence in the Justice Department can corrode the public trust.”  Seriously?

Given the tsunami of evidence piling up documenting how the FBI, the Obama Justice Department and FBI, along with the cabal of individuals populating those agencies framed, entrapped and falsely prosecuted General Flynn, it is beyond ironic that the Watergate Prosecutors would compare the events of Watergate to the events now unfolding as to General Flynn.  Watergate was a bungled burglary; Obamagate was an attempted “soft coup,” and we still don’t know if the attempt is over.  Perhaps John Durham will give some hint in the not-too-distant future.  Keep your fingers crossed. 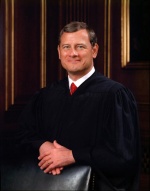 Finally, note that if the Circuit Court rules against Judge Sullivan and in favor of General Flynn, an appeal could be taken to the U.S. Supreme Court… which will soon adjourn for the summer of 2020, not returning until the “first Monday in October.”  And if an emergency stay order were to be sought by Judge Sullivan or his lawyers, postponing execution of the writ of mandamus dismissing the charges and/or removing him from the case, since the controversy arose in the District of Columbia Circuit Court, you might ask: “To whom would an emergency petition for a stay order be presented?”  That’s right, Virginia: Chief Justice John Roberts.   Yikes.

Stated otherwise, there is a chance that the ordeal being suffered by General Flynn could, in fact, persist until at least October 5, 2020, a mere 29 days before the general election on November 3, 2020.  And if you do not think that, during the period between now and then, CNN, MSNBC, CBS, NBC, ABC, The Gray Trollop, The WaPo and the DNC would be doubling and tripling down on the dissembling and invective directed at President Trump, then you have not been paying attention.  Quite apart from the false narratives that will be peddled against President Trump over the Wuhan/COVID-19 pandemic, the lunacy of the Flynn/Sullivan fiasco will be hawked as the greatest reason to vote for Joe Biden.  That assumes, of course, that he has not by then been committed to the “Delaware Home for the Bewildered.”  Do not bet the farm against that scenario unfolding.

Ladies and gentlemen, boys and girls, it looks as if we will be in for a long, hot, rough summer.

Miscellaneous Ruminations on the Flynn/Sullivan Fiasco added on Tuesday, May 26, 2020

2 Responses to "Miscellaneous Ruminations on the Flynn/Sullivan Fiasco"