“YOU KNOW YOU’RE A FAKE,” HE TELLS REPORTER 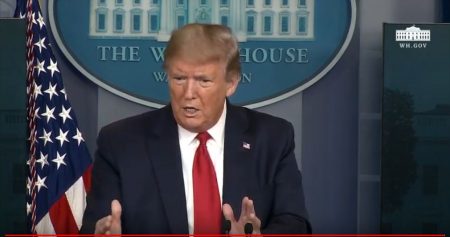 (Apr. 13, 2020) — After taking the Easter weekend off, the White House Coronavirus Task Force began its Monday briefing with President Trump expressing his condolences to Southern states hit by a multiple tornadoes from Sunday night to Monday.

As of early Monday morning, 17 people were reported deceased from the powerful storms. FEMA has already gone to the region to provide assistance, Trump said.

He reported that “the number of daily new infections remains flat” across the country.  He said that “hopefully,” U.S. coronavirus deaths will be “way below” the projected numbers, which have been revised down several times.

Fauci said that “there are still going to be a lot of deaths,” although the curve representing the pandemic in the U.S. is “flattening.”

He reported that he spoke with black leaders about the disparity between blacks’ higher incidence of complications from the coronavirus as opposed to other racial groups.

Fauci said that when he and Dr. Deborah Birx first met with Trump about the spreading pandemic, Trump “listened” and took their recommendations to carry out “mitigation,” including travel bans, to reduce the number of infections.

On January 6, Trump said, the CDC issued a “travel notice” about travel to Wuhan, China, where the virus is believed to have originated.  He said that on January 17, the idea that he was “supposed to close down the economy” arose when the U.S. had no cases.

Addressing the media’s criticism that he failed to take adequate action against the coronavirus, Trump read from a timeline he said he created himself because the media does not tell the truth.

On January 21, when the first U.S. case was reported, the CDC activated an emergency operations center, Trump recounted.  “I’m supposed to shut down the government, the biggest economy in the history of the world?” he asked rhetorically.  “We had the highest employment numbers…the best of everything…”

“On January 31st, not one person has died…” he continued, “and I issued a travel restriction from China.”

In response to the “first mandatory quarantine in more than 50 years,” Trump said, Joe Biden called him “a xenophobe.”  However, on Friday night, Trump said of the Biden campaign, “they issued a statement saying that Joe Biden agrees that President Trump was right.”

In February, Trump said, Speaker of the House Nancy Pelosi invited greater San Francisco to Chinatown for a celebration.  He called out The New York Times for being “fake.”

Trump then asked for the airing of a video montage of major media figures asserting that the seasonal flu was more dangerous than the coronavirus.  Presented with dates, it also showed Trump and other officials in various press conferences and statements as they responded to the virus.

The montage contained part of an article by The Times‘s Maggie Haberman, a known Trump opponent, stating that his action barring flights from China was “pretty aggressive.”  It also depicted New York Gov. Andrew Cuomo (D) complimenting the Trump administration for its prompt response to his state’s needs.

“We could give you hundreds of clips like that; we have them,” Trump resumed the presser.

Of The Times, Trump said that “if you had good libel laws, they would have been out of business.”

He said that states asking for ventilators “had all the ventilators they needed.”  New York, which he said asked for 40,000 ventilators, received what it needed.  The Jacob Javits Center was converted to a hospital, Trump reminded observers, but was not heavily utilized after all.

More than 400 military doctors and nurses were sent to New York City, Trump said.  “When you read the phony stories, nobody acknowledges this,” he said.

Trump said that now, the only requests for ventilators come from “outside of our country.”

“The job they’ve done is incredible,” he said of the various federal government personnel involved.

He called out the press for failing to “treat fairly” those who assisted the states.  He said he believes he has “educated” the press as to the speed with which his administration has moved.

ABC’s Jonathan Karl asked Trump why he played the video montage; to him, Karl said, it seemed like a “campaign ad.”

Trump said he is “happy” that the Javits Center is almost empty.

He praised “the level of genius and bravery” in the military.

“You heard the clips; you heard what they said,” he told Karl.  “Everything we did was right.”

Predictions have been that “the surge is coming now,” Trump said, and ventilators can be delivered “within 24 hours” if needed.

“I could have given you hundreds of people” in video clips, he said, and praised Gov. Gavin Newsom (D-CA).

The media countered with the fact that Trump retweeted a tweet which contained criticism of Fauci, spurring speculation Monday that he wants Fauci “fired.”  Trump insisted he and Fauci are “on the same page,” in response to a reporter’s question.

“Nobody’s ever done a job like this,” Trump said.  “I can tell you the ones who are good, both Republican and Democrat,” he said of the nation’s governors.

Trump claimed his China travel ban “saved hundreds of thousands of lives.”  “The minimum number was 100,000,” Trump said of the predicted number of U.S. deaths and, looking at Fauci, said that the number is expected to be substantially below that.

To a female reporter who asked what he did with the time he “bought” with the travel ban and continued to interrupt him as he attempted to answer, Trump said, “You know you’re a fake,” then berated her network for what he said are its record-low ratings.

A total of 6,190 ventilators will be added to the national strategic stockpile by May 8, Trump said.

“No one who has needed a ventilator has not gotten a ventilator,” he said, and said the same of hospital beds.  He said “thousands” of beds were built by the Army Corps of Engineers “just in case.”

“We’re prepared to build thousands more if we’re going to need it,” he said.

He said the states should have had their own stockpiles.

“We inherited a stockpile where the cupboards were bare,” he said.  “You can read your own stories on that,” he told the reporters in the room.

Reverting to reporting new information, Trump said that approximately 3,000,000 coronavirus tests have been done.  “Several antibody tests” are under development, he said.

He again “recommended” the anti-malaria drug hydroxychloroquine, stating that “a friend of mine” told him that he improved after taking it.  Earlier on Monday, The Post & Email‘s Joseph DeMaio speculated that UK Prime Minister Boris Johnson might have been administered the drug, and possibly others such as azithromycin and zinc sulfate, prior to his rapid recovery after entering the ICU several days before.

Coronavirus relief payments have begun to be deposited in destination accounts, Treasury Secretary Steven Mnuchin said.  Mnuchin said that qualifying individuals should receive relief checks “ahead of schedule” by Wednesday and provided instructions for those who fail to receive a check.

“We’ve now processed over 200 billion in loans” for small businesses, he said, referring to the Paycheck Protection Program.

He said the administration “is very close” to implementing a plan to open the U.S. economy and will be announcing a new task force Tuesday, an announcement Trump made on Friday.

Oil production will be slowed in order to revive that industry, Trump said, complimenting the leaders of Russia, Saudi Arabia, and Mexico.

He said that opening up the economy might occur “sooner than people think.”

The PPP has dispatched funds through 4,600 banks, and Treasury has asked Congress to increase the allocated money, Mnuchin said.  Last Thursday, the House and Senate failed to come to an agreement over a new bill or additional funds for the program.

The Federal Reserve is providing $2.3 trillion in liquidity, Mnuchin said, to assist in the recovery of the economy.

At 7:05 p.m., as Mnuchin moved to made his exit, Trump prompted him, “Phase IV, Steve, Phase IV,” referring to another coronavirus stimulus bill. Mnuchin was heavily involved in congressional deliberations in the third coronavirus bill, which contains the PPP.

He will announce any changes to be made to the U.S.’s support of the World Health Organization (WHO), with which Trump said he is “not happy.”

Trump Defends his Actions on Coronavirus added on Monday, April 13, 2020