Has Connecticut Turned the Corner? 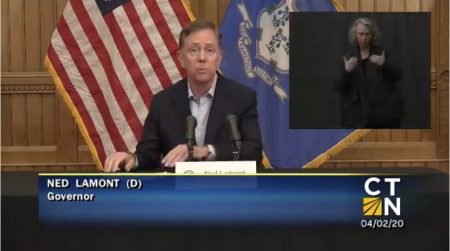 (Apr. 2, 2020) — Connecticut Gov. Ned Lamont (D) said at his daily presser on Thursday afternoon that efforts are under way to expedite unemployment compensation to individuals who lost their jobs as a result of the coronavirus outbreak.

On Tuesday, Lamont said that the state unemployment computer system is outdated, causing the first checks to be delayed by five weeks. On Thursday, he said that federal systems are cumbersome as well but that his office is working with federal officials to coordinate the payments resulting from the CARES Act passed by Congress last Friday.

The “timeline” for unemployment “is a backlog of 5 or 6 weeks,” Lamont said later in response to a reporter’s question.  “We’re working with some bright partners from the private sector…to expedite the system,” Lamont, a former entrepreneur, said.  “My goal is to clear that backlog over two or three weeks.”

More employees at the Department of Labor will be needed to process the number of claims, it was revealed.

The presser centered on financial assistance available to individuals in Connecticut forced to stay home during the early days of the U.S. outbreak because of exposure to the virus, serving as a caretaker for someone who is ill, or because of the closure of the public schools and accompanying loss of pay, a provision covered by the second congressional act signed on March 4.

Regarding the impact of coronavirus (COVID-19) on Connecticut, Lamont reported that newly-confirmed cases increased by 267 from Wednesday to Thursday, a smaller number than over the last two days, respectively.  He also observed that the “rate of infection” appears to have improved.  He made it clear that he is uncertain if those two factors represents a trend.

Connecticut has reported over 3,500 coronavirus cases among a population of approximately 3.5 million, a number much higher than many geographically-larger states such as Virginia, Tennessee and Missouri.

He foresees a $500 million revenue shortfall by June 30, the end of the fiscal year.  The “rainy day” fund will assist the state in its recovery, Lamont said.

In addition to the three already passed, Lamont said he envisions a “fourth supplemental” bill from Congress responsive to the coronavirus crisis.

Melissa McCaw of the Office of Policy & Management detailed funding from the CARES Act which she said will fund educational needs, overtime incurred by police departments, Medicaid, and nursing homes which have incurred extra costs from COVID-19, among other purposes.  “From a fiscal standpoint of the state, it is strong,” she said of the funding package.

She said that she expects Connecticut will incur $100 million in coronavirus-related expenses.  “Obviously, this is the ‘rainy day’ and shows that we are well-positioned to weather this storm,” McCaw said.

The first reporter to ask a question wished to know whether or not the death of a six-week-old child, a story reported by Fox News Thursday morning, to have tested “positive” for COVID-19, resulted from the illness, the answer to which was that the case is still under investigation.

When comparing the economic downturn to that of 2008-2209, Lamont said, “This is not your garden-variety recession,” but rather, a phenomenon caused by the sudden “shutdown” from the pandemic.

COVID-19 continues to be confirmed in Connecticut’s nursing homes, Department of Public Health Commissioner Renee Coleman-Mitchell said.  She described the situation as “extremely fluid” and that “mitigation” is currently the most important strategy.  She said she “understands the concerns” of relatives of nursing-home residents and that every effort will be made to “save their lives.”

A reporter asked for comment on the departure of Coleman-Mitchell’s deputy during the public-health crisis, to which Lamont said he had none.

He complimented the Army Corps of Engineers for setting up field hospitals in western Connecticut in recent days.

Has Connecticut Turned the Corner? added on Thursday, April 2, 2020

2 Responses to "Has Connecticut Turned the Corner?"