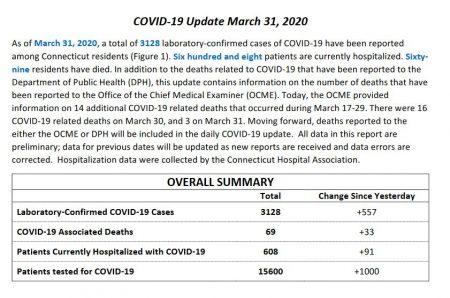 (Mar. 31, 2020) — In his daily 4:00 p.m. briefing, Connecticut Gov. Ned Lamont (D) said that unemployed workers who filed for unemployment compensation as a result of business closures from the coronavirus pandemic will have to wait “five weeks” to receive their first check.

Lamont echoed a claim President Trump made on “Fox & Friends” Monday morning when speaking about money to flow to families, individuals and businesses from the passage on Friday of the CARES Act:  that state unemployment systems are antiquated and may not be able to properly handle the additional administrative load.

The unemployment-compensation system in the state, Lamont said, is “40 years old” and may not be up to the task.  He said that the length of time the unemployed must wait is not from an “uncaring” government, but rather, from the age of the equipment and method.

Trump had said he preferred not to have the money sent through state unemployment-compensation channels and that evaluation of that pathway will likely be done once the federal payments begin.

When a reporter asked if the federal and state monies will be commingled, Lamont responded that his understanding is that the two checks will be issued separately.

A significant increase in deaths from Monday to Tuesday, 36 to 69, was reported by officials at the Hartford press conference, which one official explained emanated from 17 unreported deaths which were confirmed Tuesday by the medical examiner.

Representatives from banking organizations reported that many of their member banks and credit unions have agreed to suspend foreclosure actions during for 90 days with no impact on homeowners’ credit reports.  Evidence of hardship will be taken on an honor system from homeowners, the official said.

Schools in Connecticut are closed until at least April 20, although Lamont said that date will likely be extended.  On Tuesday, the City of New Haven closed its parks, Fox 61 reported.

A total of 3,128 coronavirus cases in Connecticut, which has approximately 3.5 million residents, was reported Tuesday.  That number includes an increase of 557 between Monday and Tuesday.  More than 600 are hospitalized, the latest statistics show.

More than half of the reported deaths have occurred in Fairfield County, which is the closest to New York City, while Windham County, where The Post & Email is located, has the fewest number of cases and no deaths to date.

In response to a question as to whether or not anyone has died for lack of a ventilator,  Lamont said, “No.”  He stated, however, that he is frustrated that “first-line responders,” meaning healthcare workers, may be completing their tasks without the proper PPE (personal protective equipment).  He added that he is doing everything possible to procure the necessary materials.

At 4:42 p.m., Lamont concluded the press conference by stating that he believes Connecticut and the nation will be “stronger” when the coronavirus crisis ends.