“BOOTING THE DEMOCRATS OUT” 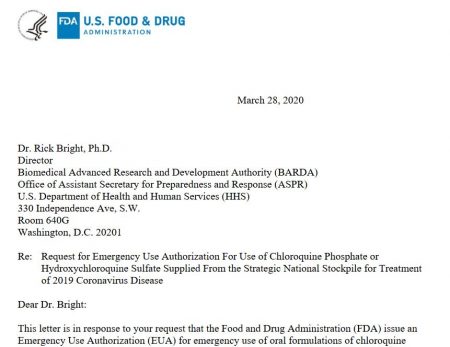 (Apr. 1, 2020) — The Food and Drug Administration (“FDA”) has the authority, under § 564 of the federal Food, Drug, and Cosmetic Act, to issue “Emergency Use Authorization” (“EUA”) orders for medical equipment and drugs which, because of exigencies, can be put into use immediately.  This is because subjecting them to the lengthy approval process would take too long.  The crux is whether the FDA finds that the benefits outweigh the potential detriments.  Hence the term “emergency.”

Recently, against the backdrop of the Wuhan COVID-19 pandemic and the devastation it is wreaking across the nation – not to mention the entire planet, save (for the moment) Antarctica – the FDA has issued EUA directives for two things.

First, on March 18, 2020, it issued to Abbott Molecular, Inc., an EUA for a “point of care” device which can analyze and determine whether one is already virus infected (5 minutes) or not infected (13 minutes).  The device, when widely dispersed across the nation to healthcare providers, will vastly increase the nation’s testing capability, both in terms of time to confirm positive or negative virus infection status and in terms of the number of persons who can be tested.  Tens of millions of Americans can be tested.

Not surprisingly, it is being called a “game-changer.”  The EUA and the Abbott device are being acclaimed by virtually everyone engaged in the battle against the disease, including members on both sides of the political aisle and, in particular, those on the leftist side of the mainstream media, if you will forgive the redundancy.

The second EUA issued by the FDA came ten days later, on March 28, 2020. This EUA related to the anti-malaria drugs hydroxychloroquine sulphate and chloroquine phosphate.  The drugs have shown promise in several anecdotal cases and will now be permitted to be prescribed for “off-label” treatment of the COVID-19 virus by physicians for persons who are hospitalized.  These pharmaceuticals, too, like the Abbot diagnostic device, show great promise as additional weapons in the arsenal against the disease.

So why, one might ask, have the Three Amigos Democrat Governors Cuomo (New York), Whitmer (Michigan) and Sisolak (Nevada) issued edicts in their states prohibiting the prescribing of these drugs?  And why has the mainstream media enthusiastically raved over and touted the Abbot device while marginalizing and even denigrating the “off-label” use of the two drugs to fight the virus?

One of the media’s favorite recent macabre stories involved reporting on the death of an Arizona man who had ingested a substance which “sounded” like the one President Trump had mentioned in a news conference.  The substance was not hydroxychloroquine, but instead chloroquine fish tank cleaner.  He died and his wife was hospitalized after taking the substance.  And yes, Virginia, both of them were (him) and are (her) Democrats.

In addition, this gem from one Rachel Sanders (a San Francisco-based reporter for Forbes, no less, reported that the FDA EUA approval of the two drugs to fight the virus came “despite inconclusive clinical proof of their efficacy.”  Really?  Memo to Sanders: if there were conclusive clinical proof of their efficacy today, there would have been no need for an EUA in the first place.  The COVID-19 pandemic emergency exists now, not two years in the future.

Accordingly, a cynic – certainly not your humble servant – might be tempted to speculate that, because the Abbot device serves to identify more and more people who are COVID-19 positive, the spread of the contagion can be made to appear completely out of control, with the end of civilization as we know it just around the corner.  We are all going to die, and it is Trump’s fault!

On the other hand, if the use of hydroxychloroquine shows that the disease can be mitigated or even brought under control until an effective vaccine can be deployed, perhaps as soon as late 2021 or early 2022, the 24/7 doom-and-gloom narrative of CNN, MSN, MSNBC, the Gray Trollop and The Washington (“Democracy Dies in Darkness”) Post is undercut.  Worse, the $2.2 trillion rescue bill potentially might not have been needed.  To Democrats, moderation in spending is a toxin.

This, of course, is anathema to the goal of the Democrat and leftist media of painting the disease as “Trump’s Katrina” in an effort to damage – perhaps even cripple – him as the November 2020 general election approaches.  Their parallel objective is to bring the nation to its economic knees just in time to blast him for “fiddling while people are dying.”   Remember, the Democrats’ “Big Gun” to vanquish President Trump, Joe (“do-you-come-here-often?”) Biden, exhorts his supporters that “we must keep Speaker Pelosi!”   Yikes.

Stated otherwise, while the Left enthusiastically emphasizes the ominous aspects of the spread of the virus, tracking its accelerating “positive infection” numbers due to vastly expanded testing, it simultaneously seeks to downplay and extinguish even anecdotal “rays of hope” represented by reports of the successful use of hydroxychloroquine.  Even Twitter removed a Laura Ingraham tweet which noted the potential benefits of hydroxychloroquine as violating its terms regarding “misinformation.”  Swell.

Bottom line: the Democrats and the mainstream media will continue to plumb the depths of political and journalistic depravity as the pandemic evolves.  That is a sad but accurate commentary on the severity of Trump Derangement Syndrome which, in some ways, has eclipsed even the ravages of the Wuhan COVID-19 pestilence.  Ignore them.  The analogue EUA vaccine to address and, hopefully, eradicate the TDS affliction in this nation will be made available to the electorate on November 3, 2020.  Inoculate and immunize the nation by booting the Democrats out.   All of ‘em.