SOCIALISM DOES NOT PROMOTE ENVIRONMENTAL PROTECTION

(Mar. 20, 2020) — We are starting to see significant pollution and greenhouse gas (GHG) emission reductions as a result of the economic slowdown caused by the world’s response to the COVID-19 virus. For example, Carbon Brief reported that GHG emissions in China had dropped at least 25% in February in comparison with the same period last year. Marshall Burke, Assistant Professor and Deputy Director, Center on Food Security and the Environment at Stanford University, tweeted on March 9 that

“Reductions in air pollution due to COVID-19 in China have probably saved 20x the number of lives than have so far been lost to the virus.”

He links to his study that shows this result published on the website of “G-FEED – Global Food, Environment and Economic Dynamics.”

France 24, the state-owned news television network based in Paris, headlined their coverage, “Clearer water, cleaner air: The environmental effects of coronavirus,” and stated:

“From crystal clear waters in the canals of Venice to dramatic falls in pollution levels in major cities, the coronavirus pandemic has had a number of positive effects on the environment as millions across the world are placed under lockdown.”

It will be tempting for environmentalists to tell us that the reduction in economic activity due to COVID-19 is an example of what we should be striving for. Indeed, the emergency is already being presented in some circles as a dry run for the systemwide changes needed to address climate change.

But this is a serious mistake. Environmentalists should be hoping the economy rebounds as quickly as possible. Only when we are affluent do we have the luxury to engage in environmental protection. While poor communities are usually willing to make sacrifices for some very basic components of environmental improvement such as safe drinking water and waste disposal, greater protections are not often instituted. However, as income rises, citizens raise their environmental goals and willingness to pay for a cleaner environment.

As early as 1943, prominent American psychologist Abraham Maslow showed that, once the basic needs of food, clothing and shelter are met in a society, people may demand less critical options such as greater environmental protection. These might deal with such things as cleaner air and rivers, recreation and the setting aside of protected wildlife areas. These less-personal demands are usually more community-focused. Clearly, with higher incomes, citizens place a greater priority on their environment. This is precisely what happened in America following the post–World War II economic expansion.

This powerful correlation between increasing affluence and the emergence of quality of life issues was first documented in the 1950s by American economist and statistician, Simon Kuznets, the winner of the 1971 Nobel Memorial Prize in Economic Sciences. It led to the development of the Environmental Kuznets Curve (EKC), shown below as extracted from Climate Change Reconsidered II: Fossil Fuels (CCRII: Fossil Fuels), a 780-page report issued last year by the Nongovernmental International Panel on Climate Change (NIPCC). It has been demonstrated to be applicable in both the developed and developing world. 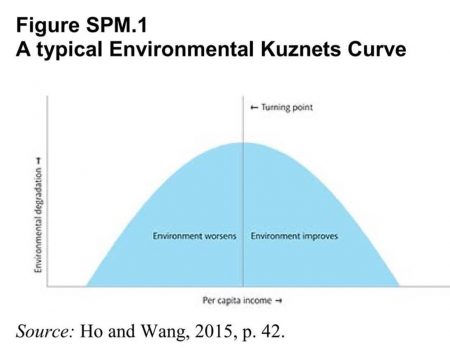 Strident environmentalists have long ignored, misunderstood or downplayed these issues. They instead have mistakenly viewed economic growth as the cause rather than the solution to environmental problems.

The EKC diagram shows that, as development begins, environmental degradation increases until a per-capita income tipping point is reached, after which the environment begins to improve. CCR-II: Fossil Fuels cites a study by Grossman and Krueger (1995) on air quality that has shown that it tends to deteriorate until per-capita income reaches between $6,000 and $8,000 per year (in 1985 dollars), after which it begins to improve sharply. CCR-II: Fossil Fuels concludes: “Later research confirmed similar relationships for a wide range of countries and air quality, water quality, and other measures of environmental protection.”

Prior to the recognition of EKCs, many well-informed people also believed that richer economies damaged and even destroyed their natural resource endowments at a faster pace than poorer ones. They believed that a quality environment could only be achieved by avoiding industrialization and the drive to increase personal income.

The EKC contradicts and is now widely accepted by economists and rational environmentalists. There is not a single EKC relationship between wealth and environmental improvement for all pollutants, places and times, of course, but the general relationship displayed in the diagram above is always closely adhered to.

Factors such as strength of democratic institutions, levels of educational achievement, and income equality also play important roles in environmental protection. However, prosperity obviously has a beneficial effect on these variables. It is essentially a positive feedback mechanism.

In the final analysis, the productivity and wealth of nations depends more on their institutions, laws, incentives and regulations than on their natural resources. Countries where private property rights are defined, protected and tradable have significantly greater per capita wealth, economic growth rates and rising standards of public health along with environmental quality.

Throughout the last century of socialist governments in countries such as Cuba, Russia, China and Venezuela, all of the above-mentioned values have suffered and the impact on environmental protection has been devastating. Yet, ironically, some of those currently seeking the US presidency maintain that they are strong environmentalists while, at the same time, preaching a form of government that has never achieved environmental quality.

Sensible environmentalists should be hoping the world economy rebounds quickly after the immediate crisis.

Note: Portions of this article were excerpted from Climate Change Reconsidered II: Fossil Fuels (CCRII: Fossil Fuels), produced by the Nongovernmental International Panel on Climate Change (NIPCC) published by The Heartland Institute, with permission of the editors Joseph Bast and Diane Bast. The authors strongly recommend the book for a complete exposé of the fallacies behind the climate delusion.

One Response to "Environmentalists Should Hope for Quick Economic Rebound"