IS “SOCIAL DISTANCING” A PART OF LIFE FOR THE FORESEEABLE FUTURE? 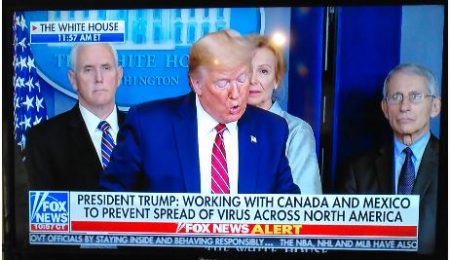 (Mar. 20, 2020) — At Friday’s White House Coronavirus Task Force press briefing, President Trump said that educational standards from schoolchildren in grades 1-12 will not be enforced due to recent school closures.  He reiterated that interest on federal student loans will be waived until the end of the year.

“We are working very closely with Mexico; very, very closely with Canada,” Trump said regarding “cross-border movement.”  He said Secretary of State Mike Pompeo and Acting DHS Secretary Chad Wolf will speak during the presser on that issue.  “We’re taking a very strong hold of that,” he said, in light of the coronavirus pandemic.

“We are helping the states a lot,” he said, speaking of recent legislation passed and the Defense Production Act invoked on Wednesday for the production of medical equipment, should it be needed.  The pandemic has now spread to 141 countries, Trump said.

Congressional legislation includes paid sick leave for anyone forced to stay at home because of illness or to care for an individual affected by coronavirus.  More legislation is expected to be passed to provide direct relief to small businesses, large industries, and individual Americans, multiple sources have reported.

Trump also said that people who were once political adversaries are speaking amicably and possibly “learning about one another,” which he said is a “good thing.”

All “non-essential traffic” between the U.S. and Canada and the U.S. and Mexico will cease Friday at midnight, Pompeo later reported.  Pompeo reiterated that the State Department is recommending that U.S. citizens abroad should immediately make plans to return to the U.S. or plan to stay abroad “for an extended period of time.”

Pompeo stressed that some information on coronavirus will come from unreliable sources.

At 12:06 p.m., Wolf took to the podium and praised Trump for having stopped incoming air traffic from China at the end of January and from Europe more recently.  he said te Trump administration is taking “extraordinary steps” to protect the American people.

Regarding Mexico and Canada, Wolf said that the limiting of “non-essential” traffic will not impact trade, for those traveling to provide medical services and several other exceptions.

Anyone seeking entry into the U.S. without proper documentation will be returned to Mexico or Canada, Wolf said, in order to avoid additional “strain” on the U.S. medical system.

HHS Secretary Alex Azar reviewed Trump’s travel restrictions on China, Iran, and other high-virus areas and said that new restrictions on individuals seeking to enter the U.S. from Mexico and Canada will be denied entry.  “We’re talking about significant numbers of illegal immigrants,” Azar said.  “CBP were never designed to hold large numbers of people” during a pandemic, he said, stressing that the new “social distancing” standard to prevent coronavirus spread “simply are not possible” in alien holding centers.

He said that the Trump administration is taking a “whole-government” approach to controlling the spread of the virus.

Dr. Deborah Birx, an infectious-disease specialist, said that data from Italy appear to show that men are dying twice as much as women in all age groups.  The current “social-distancing” standard is for people to meet in groups fewer than ten.

“I don’t have any new data,” Birx said, preemptively responding to what she believed would be reporters’ questions.  She said that those with “a better immune system” able to fight off the virus can still spread it to others who are more medically fragile.

NIAID Director Dr. Anthony Fauci explained the “two pillars” of containing the virus:  keeping out “external” entry and reducing person-to-person contact.  “I strongly support what he is doing,” Fauci said of Cuomo and Newsom.  “Please, cooperative with your governor; cooperate with your mayor,” urged Americans.

Vice President Mike Pence said that the federal government is working closely with state governments an that “millions of Americans are putting into practice the president’s 15-day guidelines” emphasizing social distancing.  Pence reiterated Trump’s announcement Thursday that FEMA will take the lead of the fight against the coronavirus.

“We want to urge every American to heed your local authorities” and to “do your part” to stop the spread of the virus, Pence said.  He said that Republicans and Democrats on Capitol Hill are debating legislation now.

On Saturday, Pence said, the Task Force will provide another update on the status of coronavirus testing and a “major procurement” of N95 masks.

The federal government continues to recommend that elective surgeries be postponed to allow for beds which may be needed for coronavirus patients, Pence said.  “Every American can do your part” to reduce the threat to the “most vulnerable,” meaning the elderly, he said.

At 12:24, Trump took questions.  In response to the first reporter’s question, he said the DPA has been invoked to obtain “millions of masks” and more ventilators.

Fox News’s John Roberts asked if a “national lockdown” is being considered by the administration, to which Trump answered in the negative.  He said the “hot spots” are Washington State, California, New York and some in Florida.  “I’m certainly honored by the way the American people are working,” Trump said of the public’ response to his “15-day” plan to reduce the number of infections.

As for whether or not the 15 days will be sufficient, Trump said the administration will have to re-evaluate it on “the 14th day.”

Regarding the use of the drug “chloroquine,” for coronavirus patients, Trump was more “optimistic” than Fauci when responding to a question.  While Fauci emphasized that chloroquine has not been tested in “clinical trials,” Trump said he has “read things” indicating it might be effective.  Trump said, however, that Fauci was correct in his statement.  The reporter asking the question then asked if Trump were “trying to put a positive spin on things” by his optimism.  “We have a lot of people who are in big trouble,” Trump said, and reiterated that chloroquine has been in use for decades.  “I sure as he** think we ought to give it a try,” Trump said.  “You know the expression:  what the he** do you have to lose?”

Another reporter asked what Trump would say to “Americans who are scared,” to which Trump said, “I think you’re a very bad reporter…That’s really bad reporting.”