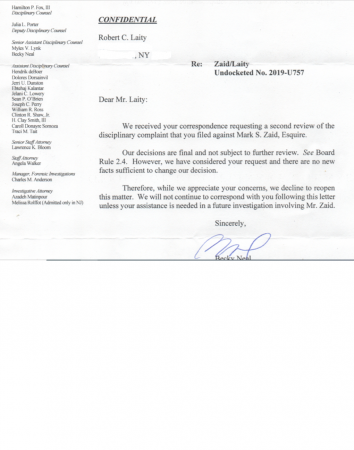 (Mar. 10, 2020) — A letter New York State citizen Robert Laity wrote to the Washington, DC-based Office of Disciplinary Counsel (ODC) in response to the organization’s declination to open an investigation into Attorney Mark Zaid was met with its firm refusal to communicate with Laity further on the issue.

Zaid was one of three attorneys representing the Intelligence Community “whistleblower” whose complaint instigated impeachment proceedings against President Trump last fall.  In early February, Trump was acquitted on both Articles of Impeachment by a majority of the U.S. Senate.

On February 6, 2020, ODC Staff Attorney Angela Walker responded to Laity’s November complaint stating that it had found insufficient reason to investigate Zaid for Zaid’s role in Trump’s impeachment, including that he had tweeted, just ten days after Trump’s inauguration, “#coup has started. First of many steps. #rebellion. #impeachment will follow ultimately. #lawyers…”

In the tweet Zaid included a link to CNN’s Jake Tapper’s Twitter feed in which Tapper announced the firing of Acting Attorney General Sally Yates, a holdover from the Obama regime, who had refused to implement a travel ban on a number of countries the Trump administration wished to monitor more closely for ties to terrorism.

According to its website, the Office of Disciplinary Counsel:

serves as the chief prosecutor for attorney disciplinary matters involving active or inactive attorneys who are members of the D.C. Bar. In this capacity, the Office of Disciplinary Counsel functions to (1) protect the public and the courts; (2) maintain the integrity of the legal profession; and (3) deter attorneys from engaging in misconduct.

The Office of Disciplinary Counsel investigates complaints and allegations of ethical misconduct and initiates appropriate resolutions, ranging from dismissals, diversions, and informal admonitions, to the preparation of formal charges.

On its “For the public” page, the ODC states, “The purpose of the disciplinary system is to protect the public, the courts, and the legal profession from attorneys who do not meet their ethical responsibilities.”

“If the complainant has no personal knowledge of the matter or if the evidence in the complaint seems insufficient to us, we may decline to docket the matter,” Walker wrote to Laity. “In those circumstances, the matter is not a matter of public record. Under the rules of the D.C. Court of Appeals, it becomes public only if we actually bring charges.”

At least two Republican members of Congress, House Intelligence Committee ranking member Devin Nunes and Trump’s choice to become the next Director of National Intelligence, John Ratcliffe, had said that the whistleblower was not honest on the questionnaire he was required to complete when reporting his complaint to the Intelligence Community Inspector General (ICIG) last August. Nunes has several times issued deadlines for ICIG Michael Atkinson to respond substantively to his questions about what Nunes claims are inconsistencies and an apparent change in the policy which required first-hand information on the part of an IC complainant.

Yet another Republican congressman, Elise Stefanik, claimed in January that House Intelligence Committee Chairman Adam Schiff’s office “helped write” the whistleblower’s complaint.  Schiff was given the responsibility by Speaker of the House Nancy Pelosi of leading the impeachment effort against Trump, which Schiff launched with private meetings in the basement of the U.S. Capitol many congressmen were barred from attending.  Any potential defense attorneys for Trump were similarly not permitted to be present.

On February 12, Laity responded to Walker by contending that, “advocating a ‘Coup’ against the Government is Sedition and advocating the overthrow of the lawful government.”  In his letter, Laity additionally refuted Walker’s claim that any “investigation” the ODC could undertake “might interfere in the political or governmental process,” calling the idea “preposterous on it’s face.” [sic]

“Investigating a plot to overthrow the government is in the public interest! Mr. Zaid published his statements on social media,” Laity further wrote. “They are public knowledge. Your specious argument that I have no ‘personal knowledge of the matter’ and that the ‘evidence [is] insufficient…to docket the matter’ is unsupportable by the facts.” 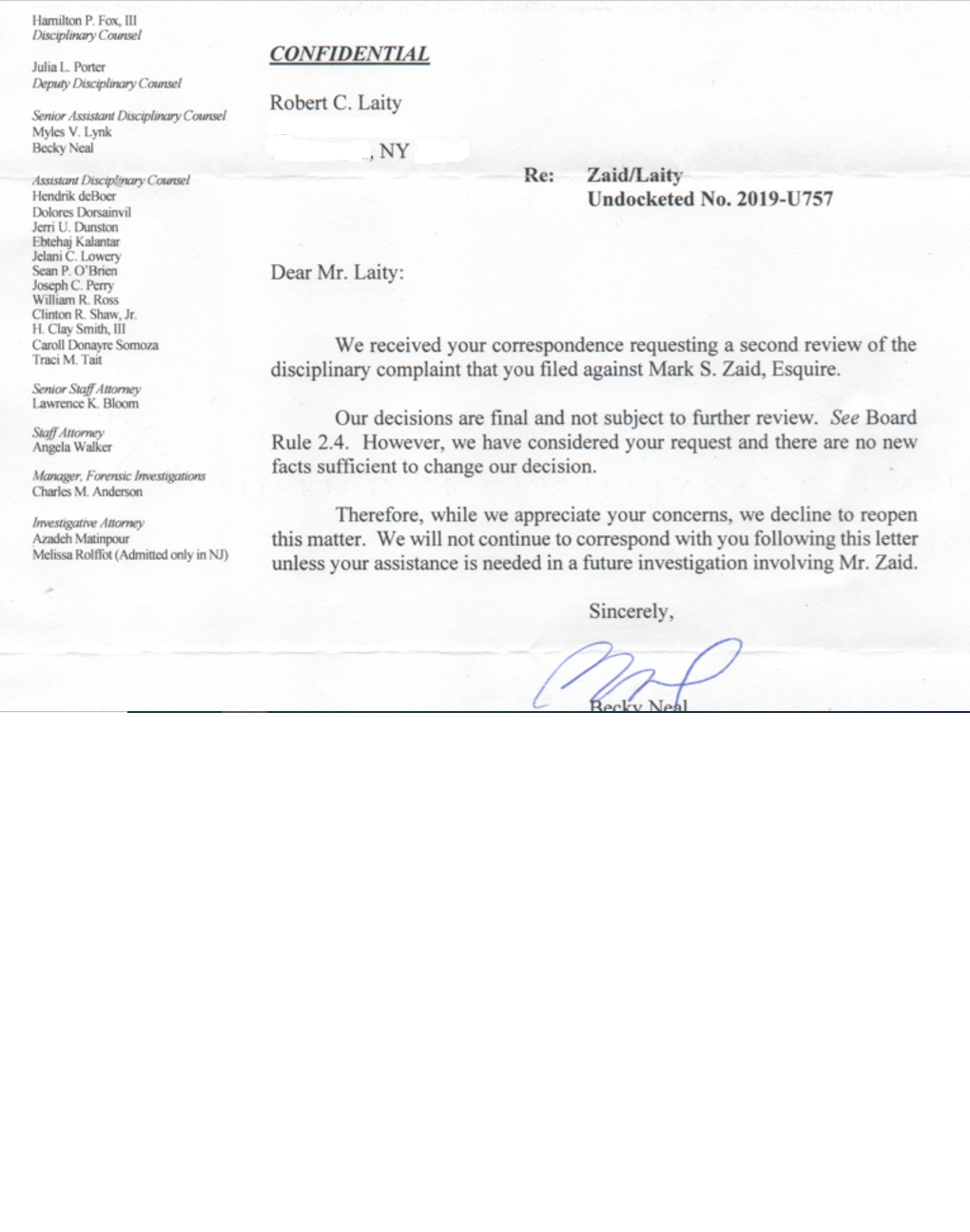 In an email to this writer on Tuesday morning, Laity clarified that despite the wording of Neal’s letter, “The request was not for a second investigation but a response to their letter to me.”

Office of Disciplinary Counsel on Whistleblower Attorney: “Our Decisions are Final” added on Tuesday, March 10, 2020

3 Responses to "Office of Disciplinary Counsel on Whistleblower Attorney: “Our Decisions are Final”"