“WE WILL WRITE TO YOU AGAIN”

(Jan. 3, 2020) — A complaint filed by New York State citizen Robert Laity against Mark Zaid, one of the attorneys for the government “whistleblower” whose second-hand claim of “abuse of power” on the part of President Donald Trump in regard to Ukraine served as the catalyst for Trump’s impeachment last month.

In November, Laity filed a complaint against Zaid with the American Bar Association (ABA) in Chicago, IL, followed by another with the Office of Disciplinary Counsel, Board on Professional Responsibility, District of Columbia Court of Appeals.  In a letter dated December 30, 2019, the Office of Disciplinary Counsel acknowledged Laity’s complaint, indicating that “This office’s review may take up to 45 days to complete.”

Laity is an associate member of the ABA, whose November 21 return letter stated, in part, “Lawyers are licensed by state supreme court’s to practice law. As the licensing agency, a state court supreme court is most often also responsible for investigating allegations of misconduct by lawyers they have licensed. The ADA does not license, investigate, or discipline lawyers based on allegations of a violation of a state’s rules of professional conduct.”

Laity’s complaint to the Office of Disciplinary Counsel appears below, with personal information redacted by The Post & Email.   “We will write to you again after our preliminary inquiry into this matter,” ODC’s letter to Laity additionally states. 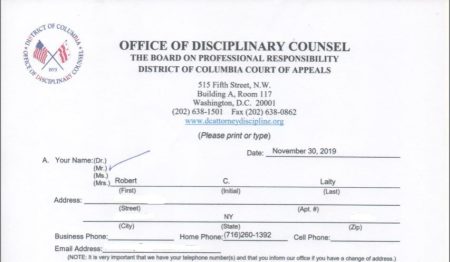 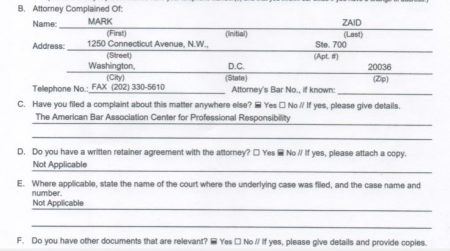