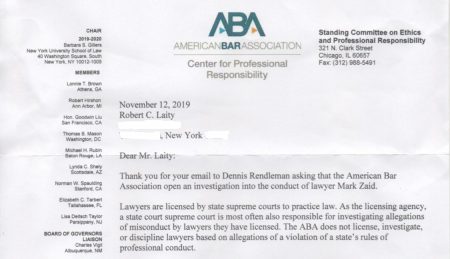 (Nov. 21, 2019) — A letter dated November 12, 2019 from the American Bar Association (ABA) addressed to New York State citizen Robert Laity responds to an email of complaint Laity sent to the organization about the conduct of Mark Zaid, an attorney representing the intelligence community “whistleblower” whose anonymous complaint touched off an “impeachment inquiry” to President Donald Trump.

The firm representing the “whistleblower” is the Compass Rose Law Group, PLLC.

Laity’s November 11, 2019 letter to the ABA stated, “It has been reported that Mr. Zaid made several public comments on social media, i.e. Twitter, in January 2017 regarding a ‘Coup’ against our nation’s President, Donald J. Trump Sr.

The response from Mary McDermott of the ABA states that “Lawyers are licensed by state supreme court’s to practice law. As the licensing agency, a state court supreme court is most often also responsible for investigating allegations of misconduct by lawyers they have licensed. The ADA does not license, investigate, or discipline lawyers based on allegations of a violation of a state’s rules of professional conduct” and refers Laity to the four state “disciplinary agencies” where Zaid is licensed. 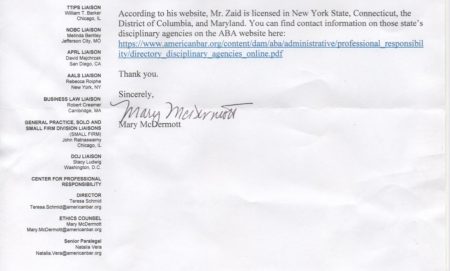 On Thursday, Laity, who is an “associate member” of the ABA, wrote a response to McDermott in which he maintained that his complaint “references to the ABA Model Rules of Ethical Conduct.” [sic]  “If Mr. Zaid is a member of the ABA, the ABA would be the body that censures an Attorney for violations of those Model rules.” 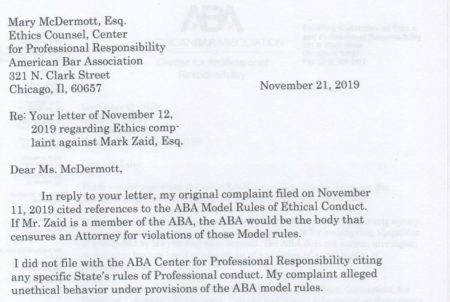 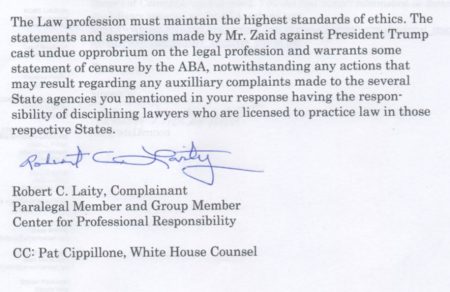