“HE SHOULD BE EXPELLED” 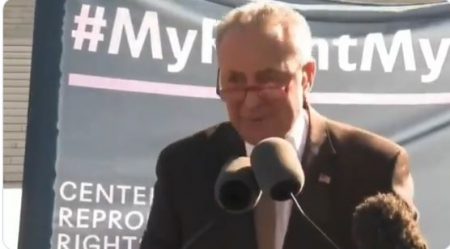 (Mar. 5, 2020) — This is not – nor should it be – even a close call: at minimum, Chuck (“watch-yer-back, pal”) Schumer must be expelled or censured by the Senate.  Expulsion won’t happen, of course, because like impeachment, that requires a two-thirds vote of the Senators, although not conditioned by the modifier “members present” regarding presidential impeachments.  And if there is any justice, Schumer should be arrested and charged with assault and threatening violence against Supreme Court Justices Neil Gorsuch and Brett Kavanaugh.

Yesterday, Schumer stood with a group of pro-abortion protesters in front of the Supreme Court building – ahem, not inside the Capitol on the floor of the Senate, thereby forfeiting his otherwise “Speech and Debate Clause” constitutional immunity – and publicly threatened Justices Gorsuch and Kavanaugh.   He belched: “I want to tell you, Gorsuch.  I want to tell you, Kavanaugh.  You have released the whirlwind, and you will pay the price…,” adding that if they voted to uphold a Louisiana law which could limit third-party abortion mills’ ability to sue on behalf of women seeking abortions, then “[y]ou won’t know what hit you if you go forward with these awful decisions.”

“You won’t know what hit you?”  Seriously?  A brick?  A boulder?  A bullet?  That invective cannot go unpunished.  If it does, then the Republic needs to be re-named the “Deep States of America.”

Finally, 18 U.S.C. § 111 includes within its definition of “assault” and provides for the punishment of anyone who, among other things, “impedes, intimidates, or interferes with any person designated in section 1114 of this title [i.e., Supreme Court Justices included] while engaged in or on account of the performance of official duties….”

This is open and shut.  If Schumer does not resign from the Senate by sundown today, he should be expelled.  And whether or not he resigns or is expelled, because he forfeited his “Speech and Debate Clause” immunity from arrest and prosecution by launching his tirade on the steps of the Supreme Court Building, Attorney General Barr should seek an indictment against him for the crimes he has committed under the federal criminal code.  To be fair, though, he should be accorded a trial.

Memo to faithful P&E readers: if Barr eventually holds a press conference and states that, after careful review of all of the facts, he has concluded – taking a cue from disgraced FBI Director James Comey that “no reasonable prosecutor would bring charges” against Schumer – get set for a Tweetstorm from the Oval Office the likes of which you have never seen.

Memo # 2 to P&E readers: once more, this latest outrage by the leader of the Democrats in the U.S. Senate only further confirms that they have forfeited any claim of right or competence to govern a free people in a constitutional republic like ours.  They must be voted out of office in November.  All of them.