(Mar. 3, 2020) — An article published Monday by David Tulis of Noogaradio 92.7 FM and TNtrafficticket.com reports that a 25-year inmate of the Tennessee Department of Corrections, Grenda Ray Harmer, was brought in an ad-hoc fashion to a “community resource center” upon the expiration of his sentence last Wednesday but eventually turned out “to the streets” for lack of housing and, more broadly, any coherent transition plan.

Tulis’s source of the information is an eyewitness and longtime acquaintance of Harmer’s who kept in touch with him throughout his incarceration and provided assistance to Harmer on Friday.

Harmer has corresponded with this writer for more than three years about Tennessee prison conditions and, more recently, several medical conditions he had insisted be treated prior to his scheduled release on February 26.  In the absence of that, Harmer had said he would not consent to release in accordance with TCA 41-21-204(e).

According to Tulis’s source, the community outreach center was unable to secure housing for Harmer as a result of his having been registered by TDOC staff with the Tennessee Sex Offender Registry for a conviction which occurred before the registry was created.

The offense is noted to have resulted in a 1979 conviction; Tennessee launched its sex-offender registry in 1995.

The Tennessee Bureau of Investigation (TBI), which operates the registry, indicates that Harmer, 67, is “homeless.”

On Monday afternoon, an inquiry sent to TDOC spokesman Robert Reburn about Harmer’s release and classification as a sex offender yielded the following response:

Mr. Harmer’s sentence expired on February 26, as you stated. The Tennessee Department of Correction cannot withhold/detain an offender, unless they have a detainer for another crime, beyond the expiration of their sentence.

It is unclear in what manner Harmer was expected to register as a result of a court order when the registry, at that time, did not exist.

When we then asked, “Thank you, but where was Mr. Harmer taken upon the expiration of his sentence, and what kinds of transitional services is he receiving, if any? Does the TDOC normally release people to the streets?” we received no response.

In correspondence received by this writer over the past year or more, Harmer indicated that he had asked to be placed on the waiting list to enter a “transition center,” of which there is only one in Tennessee.  His request was declined without explanation, although Harmer said he believed the decision to deny him reentry services was “because I’ve exposed prison officials and staff wrongdoing.”

Many of the statutes governing the sex-offender registry appear in “Chapter 39” of Tennessee code titled “Offender Registration and Monitoring” and were passed in 2004. 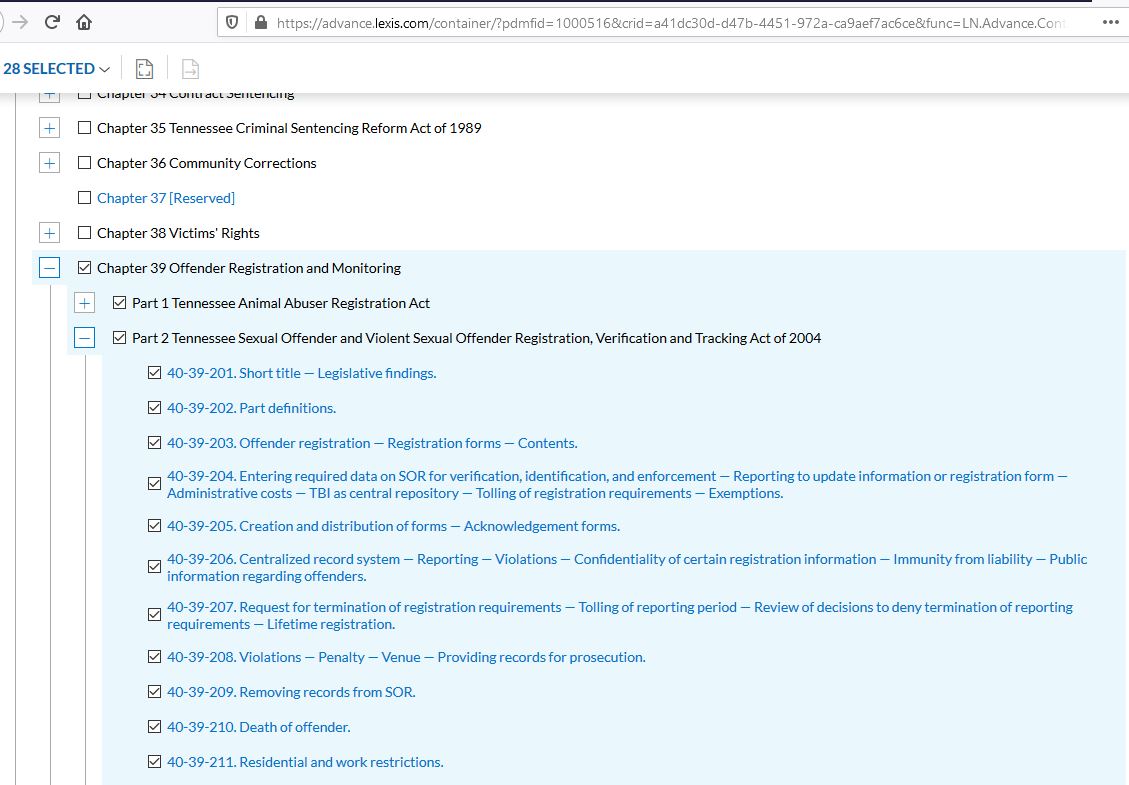 (2) Regardless of an offender’s date of conviction, adjudication or discharge from supervision, an offender whose contact with this state is sufficient to satisfy the requirements of subdivision (a)(1) is required to register in person as required by this part, if the person was required to register as any form of sexual offender, juvenile offender or otherwise, in another jurisdiction prior to the offender’s presence in this state.

Last May, the Tennessee legislature amended the 2004 statutes to allow for the removal of individuals’ names from the registry, upon application, “no sooner than ten (10) years after termination of active supervision on probation, parole, or any other alternative to incarceration, or no sooner than ten (10) years after discharge from incarceration without supervision.”

A separate amendment was approved for individuals having completed “a term of judicial diversion.”

On Monday evening The Post & Email communicated with Tulis’s source, with whom we were previously acquainted, by email, and she told us:

I can reiterate  what I told David about Grenda.  He has refused all along to sign a waiver that would release the TN Dept of Corrections from his medical care.  By law they are required to release a healthy person when his sentence is up.  But they have refused for over a year to provide him with the medical services he needs (his left knee needs to be replaced, he is severely anemic and lethargic, and his right thumb is no longer functioning and is very painful), so he is far from healthy.

On the day of his release (last Wednesday),  they said that if he continued to insist on getting the tests and treatment he needs (and by law, deserves), they would call the sheriff in Wartburg, TN (near the prison)and have him arrested for trespassing – that is, trying to remain on the prison campus after his sentence was up.  The sheriff would arrest him and he would serve 30 days, after which he would be put him out on the street in front of the jail.  Now Wartburg is a tiny community in the middle of nowhere, so he would have been in a terrible situation.  He was forced, by that threat, to sign the waiver.  And by so doing, he has now signed away any chance of medical care.

They did bring him to Knoxville and to a “community resource center” which provided him with a backpack and tried to find shelter for him.  That is an almost impossible task in this city any time, and on short notice, which that was, they were unable to find any shelter for him.   Our local shelters will not allow him to come in because when they look him up, they find that he is on a Sexual Offenders list.  Turns out that is a bogus listing because although he was convicted of a sexual offense in, I think, the 1970s, it was before there was a list or even a law requiring a list.  And the list cannot be used retroactively.  But there is no way to get his name off the list.  So TDOC had a plan all along to ruin him upon release and it is currently working.  He has to sleep outside under bridges in 20 degree temps, beg food, and limp around on his one good leg.

I was able to catch up with him on Friday.  Of course, he has no phone and access to a phone is restricted to a few hours a day in one place.  So we were lucky to be able to get together.  I got him a change of clothes, new boots (his feet are badly swollen and the old boots no longer fit), and something to eat.  In addition we went to the Food Stamp office to gather information about applying for SNAP (Food Stamps) and for a “government” phone.  I bought him a week’s bus pass and he was supposed to ride the bus today to the Food Stamp office to apply.  That application typically takes all day, so I have not heard from him.  Over the weekend he did not have access to a phone so we haven’t spoken since Friday when I dropped him off at a free medical clinic to see if they could offer any help for what ails him.  He desperately wants to work, but given his limited mobility and being on “the list”, I don’t see that happening.  If he calls and we can connect again, I am going to try to take him to a local hospital to see if he qualifies for medical assistance.  And I will also make sure that he gets his TN ID, which is crucial when you are living on the streets.  We just didn’t have enough time on Friday to get everything done and I haven’t heard from him since.

Update, 2:27 PM EST: The Post & Email moments ago received the following response from TDOC spokesman Robert Reburn regarding our previously-unanswered question presented above.

As with all offenders in custody, Mr. Harmer was afforded opportunities to begin working on release plans and preparing for reentry within 24 months of his excepted release date. These opportunities include access to orgniazaitons that can provide transitional services such as housing, transportation and employment.

Upon his release, Mr. Harmer was transported to TDOC’s Community Resource Center (CRC) in Knoxville. The CRC also provides access and information to resoruces that can ensure offender succes including but not limited to housing, employment and healthcare.