“THIS FIGHT IS FAR FROM OVER” 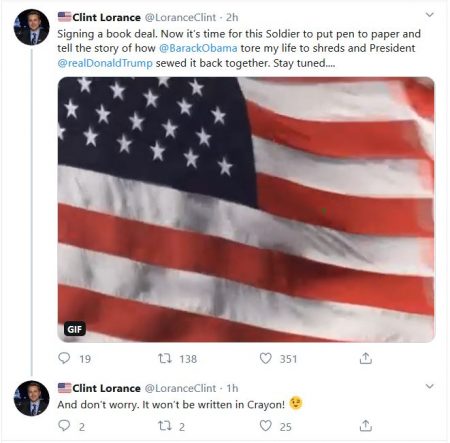 (Feb. 11, 2020) — Early Tuesday evening, former Lt. Clint Lorance, 35, who spent six years at Ft. Leavenworth prison after conviction on murder charges associated with his service in Afghanistan, tweeted that he is “signing a book deal.”

Lorance has been commenting frequently on what he believes was an injustice carried out against him by the Obama regime, and Barack Obama personally, for the decisions he made as a new platoon leader on July 2, 2012 which led to the deaths of two Afghani men.

Following court-martial Lorance was sentenced to two decades in prison; upon appeal, his punishment was reduced by one year to 19 years.

In November, President Trump pardoned Lorance and Maj. Matthew Goldsteyn, who was also accused of murder during a deployment, and restored rank to U.S. Navy Chief Eddie Gallagher.  On November 18, Lorance interviewed in person with the hosts of “Fox & Friends,” during which he said he spoke directly with the president the evening of his pardon.

According to UAP’s summary of the case, Lorance “never fired his own rifle” when three Afghan men on a motorcycle approached the platoon just days after Lorance’s predecessor had been gravely wounded by explosives lobbed by an insurgent.

During our interview, Gurfein said Lorance’s place of deployment was known as the “‘Heart of Darkness’ because it was the birthplace of the Taliban…While he was there, the month leading up to the incident…there was an IED going off just about every day, and sometimes two or three a day.  So soldiers were being wounded and killed; there were direct-fire engagements.  This was as bad as you could imagine engaging and being surrounded by the enemy.”

One of The Post & Email’s readers, Mrs. Norma Whiting, had exchanged letters with Lorance while he was at Leavenworth, during which she said Lorance spoke highly of his family.

Earlier on Tuesday, Lorance decried his rejection for an apartment because of his criminal conviction which he attributes to Obama.  “Never thought I’d have to face these problems,” Lorance tweeted.

On Monday, Lorance compared his current circumstances to the time he spent in Leavenworth. 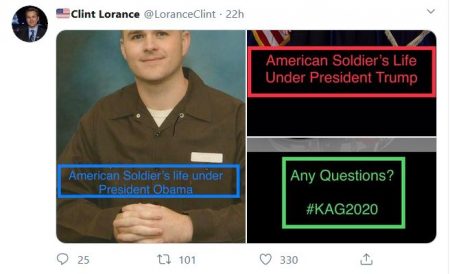 Praising Trump in many of his tweets, Lorance contends that “#ResultsMatter.”

On Friday, Lorance tweeted that in regard to wrongful military prosecutions, “this fight is far from over,” citing a UAP report about three Marines Special Operations forces (Raiders) accused of murder and facing courts-martial. 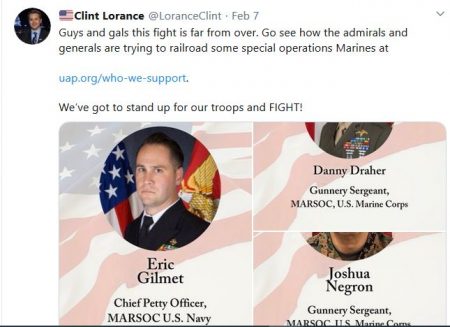