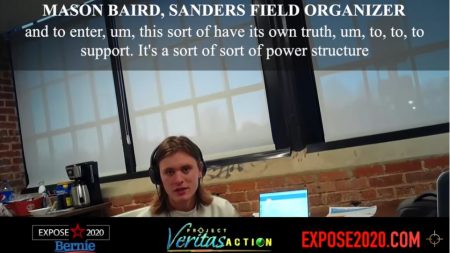 (Jan. 28, 2020) — Project Veritas has released a new video in its “Expose2020” series on the Bernie Sanders campaign in which two “field organizers” speak, respectively, about an “American empire,” “getting into the crazy stuff,” and the advance of socialism in the United States.

As with other PV videos, an undercover journalist with a camera engaged the staffers in conversations, asking pointed questions about how the staffers envision enacting their agendas.

At 6:24, organizer Mason Baird tells the journalist, “It’s going to take militancy…An empire has sorta never been toppled by internal struggle, so it’s like, I don’t really see that working out.”

The other organizer, Daniel Taylor, states that “even if Bernie is elected, change will not come swiftly or easily.  The connections that we’re making now within the campaign and with new volunteers and at events, it’s very important that we retain that, regardless of the outcome.  it is unfortunate that we have to make plans for extreme action…”

Two videos of Sanders field organizer Kyle Jurek were released earlier this month in which Jurek predicted “revolution” and spoke of “re-educating” people in lieu of “putting them up against a wall.”

The Sanders campaign has not commented on the videos.