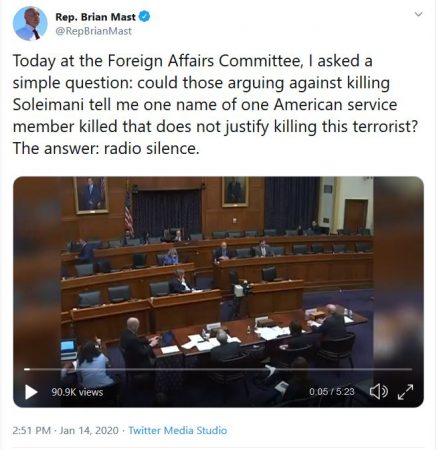 (Jan. 15, 2020) — The House Foreign Affairs Committee held a hearing yesterday on whether the neutralization of Iranian General and uber-terrorist Qasem Soleimani was justified.  The issue involved whether Commander-in-Chief Donald Trump correctly concluded that Soleimani’s continued presence on earth constituted an “imminent threat” to the safety and lives of others, including American military service personnel.

This, of course, was during the time when members of Soleimani’s gangs were attacking the U.S. Embassy in Baghdad, bashing in windows at the entrance and setting fires in an effort to gain entry to the main compound in an apparent attempt to reprise the diplomatic facility disasters of 1979 in Tehran, Iran and 2012 in Benghazi, Libya.

It was clear that Soleimani was behind the Baghdad attack and, due to his presence in Baghdad after landing at its airport and taking a trip into the city, he was not likely there to broker peace.  In any event, President Trump authorized the reduction of Soleimani to his constituent organic parts by a Reaper drone…, and the world suddenly became a better place.  Stated otherwise, one does not wait until a bullet is in flight to a target to declare that the threat of death is “imminent.”

Returning to the hearing, Congressman Brian Mast (R. FL) executed one of the most compelling demonstrations of why the Democrats have forfeited any claim of right, ability or competence to govern a free people in a constitutional republic such as ours.  Specifically, Congressman Mast – who lost both of his legs in the service of his country – took a portion of his allocated time in the hearing to ask the witnesses and any of his colleagues if they could name a single member of the military service – names inscribed on walls outside the hearing room – who had lost their life fighting terrorism whose death did not justify the elimination of Soleimani.

Crickets.  More crickets.  Stunned, dumbfounded looks on witness faces.  While the next few paragraphs of this post summarize the event, faithful P&E readers need to watch the entire five minute, twenty-three-second video to appreciate the full impact of what took place.

On the “imminent threat” question, after Congressman Mast compared Soleimani to a machine-gun nest simply pausing briefly to reload, he posed the question to the witnesses and his colleagues, commenting that he had two minutes and thirty seconds of his time remaining and that he wanted to wait for any responses to his question.

At the 3:10 point, Engel then noted that Mr. Mast had “made his point” and “thanked” him, then proceeded to unilaterally revoke the remainder of the congressman’s time by calling upon “Mr. Phillips,” presumably Dean Phillips (D. MN), attempting to end the silence permeating the room.  Congressman Mast objected, noting that he had not yielded back his time, at which point (3:17 in video) Engel blurted that Congressman Mast “was disrupting the proceedings.”

Say what?  Engel is accusing Congressman Mast of “disrupting the proceedings” by properly claiming the remainder of his allocated time in order to provide the witnesses and any of his colleagues the opportunity to answer a legitimate question?  Engel noted that Mr. Mast had made his point and that he should proceed.  Mast responded that he still had two minutes left, and that he was proceeding: he was still waiting for any answers to his question.

This is where it gets good: at the 3:31 point, Engel bangs his gavel and repeatedly tells Congressman Mast that he is “out of order.”  Congressman Mast continues to argue his point, that he is not yielding back the remainder of his time.  At that point, another committee member (unidentified, but likely Congressman Phillips… if so, kudos to Phillips) yields one minute of his time to Mr. Mast.

This causes Engel to freeze, gavel in hand, with the silence returning to fill the room.  Engel fires an “I-detest-you” look at Congressman Mast… the double amputee representing his constituents in the U.S. House of Representatives. The only sounds discernible (although unintelligible in the video) are those of a desperately flummoxed Engel leaning back to one of his aides, gavel still locked and loaded, apparently seeking advice on what the heck he could next do to end the ordeal.  Answer: nothing.  After the yielded one minute expired, Congressman Mast thanked Congressman Phillips and noted that there had been zero answers to his question, at which point the video ends.

If the electorate needed a single video clip demonstrating why all Democrats in the House of Representatives need to be replaced with Republicans (or perhaps rational Independents… and maybe, as a sole exception, Dean Phillips if, in fact, he was the one who yielded his one minute to Mr. Mast), this is the one they should watch.  The video demonstrates just how far congressional Democrats will go to continue their attacks on President Trump.  They are intellectual termites.

Congressman Mast lost both of his legs in Afghanistan in support of his country.  Whether you agree or disagree with the decisions of this or prior administrations regarding our presence in Afghanistan, just remember that Mast’s actions as a member of the House Foreign Affairs Committee yesterday were neither “out of order” nor “disruptive” of Engel’s “proceedings.”   The only thing “out of order” concerning that committee is that it is presently chaired by Eliot Engel, thanks to Nancy Pelosi.  Yikes.

I am now going to watch the video again.  You should, too.

Of Imminent Threats and Crickets added on Wednesday, January 15, 2020

2 Responses to "Of Imminent Threats and Crickets"