Is This Why the “Deep State” Went after Flynn?

(Dec. 31, 2019) —  On May 23, Russian-born British citizen, academic and author Svetlana Lokhova filed suit against Stefan Halper, who it has been established acted as an informant about the 2016 Trump campaign to certain U.S. government agencies.  Lokhova named additional defendants as Dow Jones & Company, parent company of The Wall Street Journal; The New York Times, and NBC Universal.

In the suit, she alleged defamation, seeking “(a) compensatory damages and punitive damages in the sum of $25,350,000.00, (b) prejudgment interest on the principal sum awarded by the Jury from February 19, 2017 to the date of Judgment at the rate of six percent (6%) per year pursuant to § 8.01-382 of the Virginia Code (1950), as amended (the “Code”), and (c) court costs – arising out of the Defendants’ defamation, common law conspiracy, and tortious interference with contract and reasonable business expectancies” (pp. 1-2).

On Twitter Lokhova describes herself as “Historian. Eye Witness of the conspiracy to takedown General Flynn and President Trump. First hand evidence and expert analysis of Spygate. Honorary US Patriot.“

“Spygate” refers to the claim, based on a number of emerging facts, that members of the U.S. intelligence agency “spied” on the 2016 Trump campaign by sending confidential human sources (CHSs) to interact with campaign aides and obtaining surveillance warrants on at least one, Carter W. Page, both of which were confirmed by Justice Department Inspector General Michael Horowitz in a report released December 9.

In her lawsuit, Lokhova is represented by Steven S. Biss, who also represents Congressman Devin Nunes (R-CA22) in defamation lawsuits against McClatchy and Twitter, respectively.

In a 66-page filing, Lokhova claims that Halper injured her financially and reputationally by using the named-defendant U.S. media companies, as well as British media, to spread the false allegations that she and Lt. Gen. Michael T. Flynn (Ret) became romantically involved following their introduction at a “Cambridge intelligence seminar” in 2014 and that she was a “Russian agent.”

At the time, Flynn headed the Defense Intelligence Agency (DIA) under Barack Obama, who would later “force out” the 33-year military and combat veteran from his post.  During the 2016 presidential transition, Obama reportedly counseled then-President-Elect Donald Trump not to offer Flynn a place in his administration.

The Horowitz report confirmed not only that Carter Page was the subject of four FISA surveillance warrants which stretched well into Trump’s first term, but also that former Trump campaign aide George Papadopoulos, onetime Trump campaign manager Paul Manafort, and Flynn were placed under FBI surveillance in 2016.

In his book, “Deep State Target” published in March, Papadopoulos described strange encounters initiated by at least a half-dozen individuals while he was living and working in London, some or all of which were “consensually recorded,” according to the IG report (p. 7).

In “Deep State Target,” Papadopoulos does not indicate that he consented to being recorded, and in numerous interviews over the last year or more, Page has indicated no knowledge that Halper was cultivating contact with him while serving the U.S. government as a CHS.

Despite Obama’s apparent words of caution regarding Flynn, Trump chose Flynn, who had been a notable Trump-campaign supporter, to serve as his national security adviser.  However, on February 13, 2017, Flynn resigned under pressure after the content of a telephone call he shared with then-Russian ambassador to the U.S. Sergey Kislyak was leaked to The Washington Post and contradicted Flynn’s characterization of the exchange to Vice-President-Elect Mike Pence.

The day after Flynn’s resignation/firing, the AP trumpeted, “Flynn, fired once by a president, now removed by another.”

On January 24, 2017, four days after Trump’s inauguration, FBI agents Peter Strzok and Joe Pientka were dispatched by then-FBI Director James Comey, according to Comey in an October 2018 interview with MSNBC’s Nicolle Wallace, to question Flynn about his calls with Kislyak.

Strzok has since been fired from the Bureau and sued the Justice Department over the loss of his job. His legal team recently claimed in a court filing that his “free speech” and “privacy” rights were violated when his texts, sent on an FBI-issued phone to his paramour, then-FBI counsel to the Deputy Director Lisa Page, were made public.

Lisa Page, too, has sued the FBI and Justice over the publication of the texts and what she claims was a violation of the Privacy Act.  In addition, she claims that the government should be held responsible for child-care and other costs she allegedly incurred when she was deposed by members of Congress over her role and knowledge of the FBI’s counterintelligence operation aimed at the  Trump campaign.

Page resigned from the FBI in early May 2018 and was deposed on two occasions in July that year.

On July 9, 2016, as Lokhova tweeted Tuesday, Flynn published a column in The New York Post titled, “The military fired me for calling our enemies radical jihadis.” 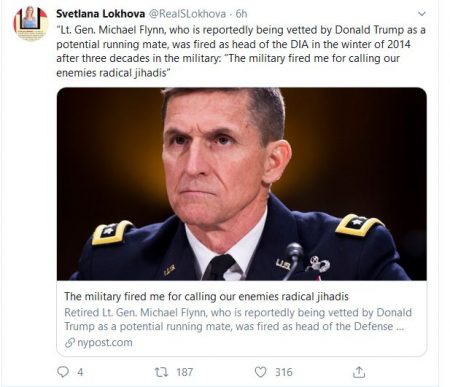 In late October, Fox Business’s Maria Bartiromo interviewed Lokhova as part of Bartiromo’s reportage of the “Russia collusion” investigation then ongoing by Special Counsel Robert Mueller.  Eight days after Comey’s firing on May 9, 2017, Mueller was brought in by then-Deputy Attorney General Rod Rosenstein to complete the FBI’s counterintelligence probe into the Trump campaign known as “Crossfire Hurricane.”

Lokhova also reported a written interview with The New York Times‘s Matthew Rosenberg in May 2017 which she said was never published.  In November Lokhova was interviewed by Dennis Prager and RedState.

In April, Mueller’s report revealed to the public that no evidence of “collusion” between Russia and members of the Trump campaign, nor any American, was found by the 22-month, $35-million investigation which cast a cloud over Trump’s first two years or more in office.

In an amended complaint filed in August, Lokhova, through counsel, asserted, “The FBI knowingly used Halper’s lies and the lies of others as the seeds and foundation upon which to begin a ‘special investigation’ into ‘collusion’ between the Trump campaign and the Russian government” (p. 5).  On the following page, Lokhova wrote that “Mueller and his team never interviewed Plaintiff once and never subpoenaed a single record from her…” 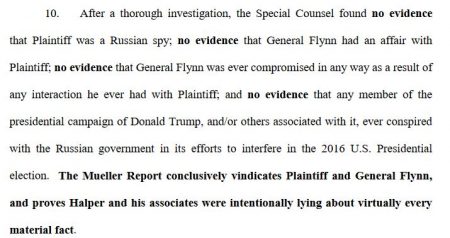 In 2017, Flynn was charged with lying to Strzok and Pientka on January 24, 2017, to which he pleaded “guilty.” After numerous postponements, twists and turns, Flynn faces sentencing on January 28.  The presiding judge, Emmet Sullivan, previously accused Flynn of “selling his country out” and, in his most recent opinion, accused Flynn’s current attorney, former Justice Department attorney Sidney Powell, of plagiarism, an allegation Powell denies.

The Post & Email attempted to open the link in Lokhova’s tweet and reached an “Error 404” message at a Weekly Standard webpage containing the url.

We then sought the article through the Internet Archive, often referred to as the “Wayback Machine,” where we located what appeared to us to be the most recent capture of the intact article.  Two respective dates in 2018 and 2019 indicated that the article url was captured but that the content had been removed.

While serving as Obama’s secretary of state, Clinton used a private, unsecure email server for both personal and government communications, the details of which the conservative government-watchdog organization Judicial Watch is still seeking through court action.  It is a matter of record that Clinton deleted approximately 33,000 emails which she claimed were of a personal nature and that her aides destroyed and/or wiped clean their devices used to communicate with Clinton at the time.

On July 5, 2016, in the heat of the general-election campaign, Comey gave an unprecedented solo press conference in which he claimed that “no reasonable prosecutor would bring such a case,” signifying that the FBI was recommending to the Justice Department no criminal investigation of Clinton or her aides.

In mid-October that year, Clinton said she used the private server “for the purpose of convenience.”

Strzok and Lisa Page were deeply involved in the Clinton email probe, dubbed “Mid-Year Exam” (MYE), and both worked briefly on Crossfire.

“Flynn made the comments to Megyn Kelly last night on Fox News:” the Weekly Standard article continues, although the embedded video yields an apparent “error” message in another language. 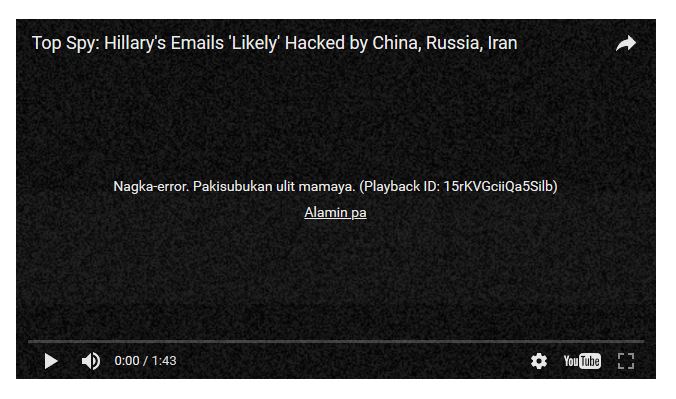 The author, Daniel Halper, quoted Flynn as having told Megyn Kelly, “As a military officer, if I said I was doing something for convenience’s sake to the soldiers that I was leading and it was solely for my convenience instead of their, you know, their welfare, I should be relieved of duty. I would expect to be fired.  You know, it’s one of those things where if it doesn’t feel good it probably isn’t. And this one doesn’t feel good to me.”

Kelly asked, “What do you think the odds are that the Chinese, the Russians hacked into that server and her e-mail account?”

“Yep. Likely. They’re very good at it. China, Russia, Iran, potentially the North Koreans. And other countries who may be ‘our allies’ because they can.”

Flynn said we “all ought to be asked” about Hillary Clinton’s emails and the security surrounding her private account.

One Response to "Is This Why the “Deep State” Went after Flynn?"