Someone from the Clinton Email Investigation is Lying, but Who?

“YOU ARE REQUIRED BY LAW TO ANSWER QUESTIONS FROM CONGRESS TRUTHFULLY” 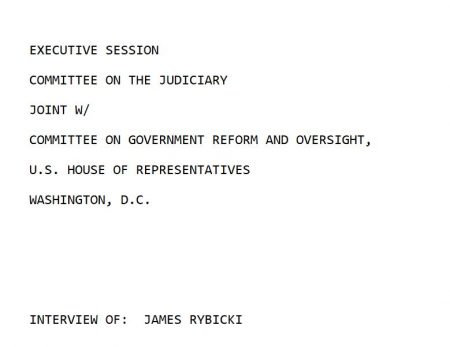 (Jun. 18, 2019) — On page 41 of the transcript of a closed-door interview between former FBI Chief of Staff James Rybicki and members of the House Judiciary and Oversight & Government Reform Committees, Rybicki is noted to have stated that he was present in a meeting in which then-Attorney General Loretta Lynch told FBI Director James Comey to call the probe into Hillary Clinton’s use of a private email server a “matter” rather than an investigation.

To the best of his recollection, Rybicki told congressional investigators on January 18, 2018, the meeting in which Lynch gave the directive occurred in the “fall of 2015.”

On June 8, 2017, Comey, who was fired by President Trump one month earlier, testified publicly to the Senate Intelligence Committee that Lynch had given that mandate.  However, in her closed-door deposition of December 19, 2018, Lynch denied the claim (pp. 16-17).

Five days after Rybicki’s deposition, it was announced he would leave the Bureau, although FBI Director Christopher Wray said Rybicki’s decision to resign was “voluntary” and submitted a month earlier.

Lynch departed when Trump was inaugurated on January 20, 2017.

Clinton served as Obama’s Secretary of State between early 2009 and early 2013. In 2015, the government-watchdog organization, Judicial Watch, discovered through an unrelated FOIA request that Clinton’s emails were not captured in communications in which she would surely have participated, which led to the discovery that she used a non-governmental computer system to conduct State Department business.

After The New York Times reported Clinton’s use of a “private email account” in early March 2015, the FBI launched an investigation into Clinton’s practices known as “Mid-Year Exam.”

As Rybicki testified, laptop computers belonging to “two attorneys” (p. 34) who served as Clinton’s top aides at State were obtained by FBI investigators through means other than a search warrant. Testimony from former FBI Deputy Director Andrew McCabe in December 2017 supported Rybicki’s statement that there was tension between the Justice Department and the FBI as to the method by which the laptops would be obtained in order to search for evidence.

McCabe was fired in mid-March 2018 for an alleged “lack of candor” during interviews with the DOJ Inspector General’s office relating to “decisions made” by the Bureau and Justice Department in 2016.  The Inspector General subsequently referred McCabe for criminal investigation to the U.S. Attorney for the District of Columbia.

McCabe has denied the accusations.

On July 5, 2016, four months before the presidential election, Comey gave a public address in which he faulted Clinton for her “careless” handling of classified material as Secretary of State but said the FBI was declining to recommend to the Justice Department that she be prosecuted criminally. “No reasonable prosecutor would bring such a case,” Comey declared.

An Inspector General report released on June 14, 2018 found Comey to have been “insubordinate” in delivering the remarks without the approval of the Justice Department. In her deposition, Lynch testified that Comey had called her that morning to say he would be giving a press conference but that he did not elucidate her as to what he planned to say (p. 15).

McCabe stated that despite Comey’s having drafted a memo which became the prototype for his July 5 remarks, he had not made a definitive decision as to whether or not the Bureau would recommend Clinton for prosecution. Clinton and lawyer-aides Heather Samuelson and Cheryl Mills were not interviewed until July 2, 2016 and were permitted to represent Clinton at the same time, a situation the Inspector General found to be “inconsistent with typical investigative strategy” (p. 5).

On Monday Fox News reported that as a result of a State Department review of Clinton’s use of the private server, “23 ‘violations’ and seven ‘infractions'” have thus far been identified.

At the beginning of each witness interview, the committee chairman leading the session stated that although the deposition would not be taken under oath, “you are required by law to answer questions from Congress truthfully.”

Someone from the Clinton Email Investigation is Lying, but Who? added on Tuesday, June 18, 2019

2 Responses to "Someone from the Clinton Email Investigation is Lying, but Who?"