CAN WE FIND JOY IN THE MIDST OF ALL THE CHAOS? 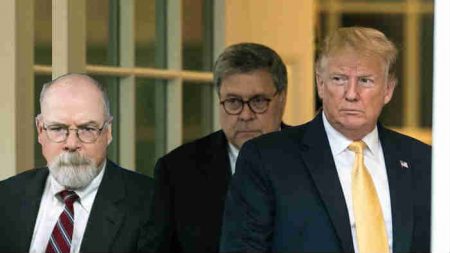 (Dec. 12, 2019) — We are living in what author Joseph Heller, as a WWII fighter pilot, humorously penned as a Catch 22, where he wrote about being a fighter pilot where it was considered insane for him to continue flying such dangerous combat missions. But, if he requested to be removed from flying such missions, he was proven sane and, therefore, ineligible to be relieved of duty. That same government, although with 70 years more experience in doublespeak, has us living in a similar no-way-out, damned if we do, damned if we don’t, world.

Most reading this want Bill Barr and Bull Durham to begin making the big arrests and, not only do I join you in your eagerness, but now believe in my very soul that arrests for sedition and treason from the very top of the previous administration will, in fact, be forthcoming by the early spring, if not sooner. But, where there is desire, there must also be equal amounts of caution under the heading of being careful of what we wish for.

Many on our side will be extremely happy that justice will finally be served, but equally or possibly a larger number of people will freak out, which at least, in the short term, may cause massive civil unrest and orchestrated riots which, hopefully, will be short-lived and contained to only the large blue inner cities.

Conversely, as we keep in mind that this has been the greatest insider and most complex coup attempt against a sitting president in the history of America, if not the world, if arrests, especially those in the top-tier are not made, then what becomes of our faith and confidence in our government, based primarily on our laws of equal justice for all?

Know that our entire system of government, including our currency, runs on that very faith and confidence where, should the final results of the Barr/Durham investigations leave us with a cover up, where none of the coup plotters are arrested and charged, it will likely shake that entire system to its core. That same faith and confidence in our currency is primarily the very thing in which world credit markets rely and trade on. Without that inherent confidence, our precarious financial markets could crash, where we might then find ourselves in the unchartered waters of civil unrest everywhere throughout the nation.

As you know, there is a great deal riding in the balance.

It is encouraging, however, that more and more people are seeing firsthand the doublespeak of IG Horowitz’s report, where we find it to reveal where crimes have been committed, while others highlight only where the term ‘no bias’ was found, as both sides spin away at hooray for our side.

And then, the Senate hearings of the Horowitz report prove once again that there is no honor among thieves, as they put on display for all the world to see how totally corrupt our government leaders have become. Each one sitting in a big comfortable chair playing out the hand with cards held closely to their chests, with the primary objective being the protection of their ongoing-sources-of-ill-gotten wealth.

President Donald J. Trump is the one and only man standing in their way, with the obvious assistance of Attorney General William Barr and his lead investigator, United States Attorney John Durham. Pray for their continued strength. Pray for their guidance. Pray for their safety.

And to add a small note of frivolity, remember how relevant Yogi Berra was when he told us, “Predictions are difficult to make, especially about the future.”

We must all pray for a most peaceful conclusion to our present dilemmas. But, for now, our focus must be on having a Merry Christmas as we remember the message of peace, love and joy as the birth of our Savior brings to us this holiday season. We must put aside our differences and come together full of goodwill and cheer and joyfully eat, drink and be merry with family and friends, this year more than ever before. Amen. Hallelujah!

Fredy Lowe served proudly in the United States Marine Corps and the New York City police Department. He has been a citizen journalist for nearly ten years writing for Canada Free Press, Before It’s News, Conservative News & Views, Ammoland, The Post & Mail, and others.

Faith & Confidence In Government Now In The Balance added on Thursday, December 12, 2019

2 Responses to "Faith & Confidence In Government Now In The Balance"