Breaking: Secretary of the Navy Terminated 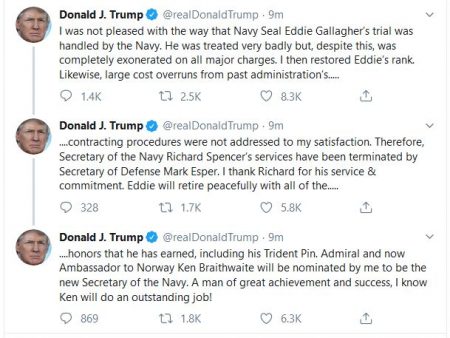 (Nov. 24, 2019) — Just after 6:30 PM EST on Sunday, President Donald Trump tweeted that Secretary of the Navy Richard Spencer was terminated by Secretary of Defense Mark Esper.

In connection with that move, Trump said, was the issue of Navy SEAL Eddie Gallagher, who was acquitted on six of seven charges this past July stemming from multiple overseas combat tours but was facing possible revocation of his Navy “Trident” pin.

Following court-martial Gallagher was convicted on one count of taking a photo with a human casualty and demoted one rank from Chief Petty Officer to Petty Officer First Class.  His sentence included time already served in a military brig, and Gallagher has been planning to fully retire.

On Sunday morning, Gallagher was interviewed by “Fox & Friends” co-anchor and U.S. Army veteran Pete Hegseth, at which time Gallagher said that Adm. Collin Green, who reported to Spencer, had informed his legal team that an “administrative review” as to whether or not Gallagher could retain the Trident was to take place.

The review was reportedly suspended Thursday.

Gallagher claimed to Hegseth that his legal team “filed an IG [complaint] exposing all the corruption that’s been going on during my case…Just recently, we’ve come up with more evidence that we’ll be exposing next week that the Secretary of the Navy was actually meddling in my case while I was incarcerated.”

Gallegher was arrested on September 11, 2018 for the alleged murder of a captured ISIS fighter and held at Naval Consolidated Brig Miramar.  The following month, Gallagher’s wife and young sons were reportedly roused from sleep in the wee hours of the morning and ordered out of their home at gunpoint as the NCIS executed a search warrant.

In March, Trump intervened to request that Gallagher be moved to less harsh quarters while he awaited trial. 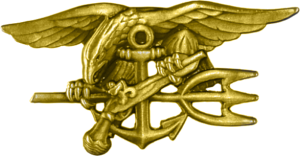 In his three-tweet announcement, Trump reiterated that in a presidential directive dated November 15, he had restored Gallagher’s rank to Chief Petty Officer. At that time, 1st Lt. Clint Lorance, imprisoned for the past six years at Ft. Leavenworth on a 19-year sentence, received a full pardon and expungement of his record, and the Army was ordered to drop the prosecution of Major Matthew Goldsteyn on a murder charge which had previously been prosecuted but unproved.

Trump added in his tweet on Sunday that “Eddie will retire peacefully with all of the………honors that he has earned, including his Trident Pin.”

In addition to the issue over Gallagher’s Trident insignia, Trump cited Spencer as having failed to adequately address “large cost overruns from past administration’s contracting procedures.”

Article II, Section 2, clause 1 of the U.S. Constitution states that “The President shall be commander in chief of the Army and Navy of the United States, and of the militia of the several states, when called into the actual service of the United States; he may require the opinion, in writing, of the principal officer in each of the executive departments, upon any subject relating to the duties of their respective offices, and he shall have power to grant reprieves and pardons for offenses against the United States, except in cases of impeachment.”

Breaking: Secretary of the Navy Terminated added on Sunday, November 24, 2019