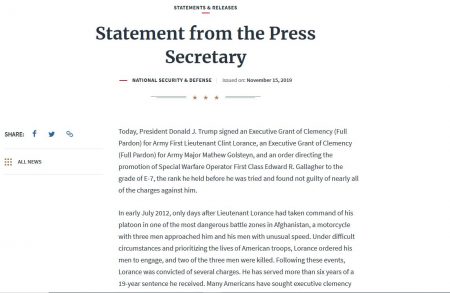 (Nov. 16, 2019) — On Friday night, the White House issued a statement declaring that “President Donald J. Trump signed an Executive Grant of Clemency (Full Pardon)” for two former U.S. Army soldiers and a promotion order for a Navy SEAL who had been demoted as a result of a conviction on one count and dismissal of all other charges in July.

For the last six years, 1st Lt. Clint Lorance, 35, was held at Ft. Leavenworth military prison after his conviction on two counts of murder and one for attempted murder for commanding the soldiers he led to fire on three suspected terrorists in Afghanistan in 2012.

Photos of Lorance’s reunification with his family Friday night were released by his attorney, Don Brown.

The second Army member, West Point graduate Major Matthew Goldsteyn, was facing trial next month onr a charge of “premeditated murder” of a Taliban bomb-manufacturer in 2010.  Although in 2013 not prosecuted on the allegation, the Army renewed its pursuit of a conviction in 2016 after Goldsteyn told Fox News’s Bret Baier that he killed the terrorist.

Of Goldsteyn’s case, the White House statement reads, “After nearly a decade-long inquiry and multiple investigations, a swift resolution to the case of Major Golsteyn is in the interests of justice. Clemency for Major Golsteyn has broad support, including from Representatives Louie Gohmert, Duncan Hunter, Mike Johnson, Ralph Abraham, and Clay Higgins, American author and Marine combat veteran Bing West, and Army combat veteran Pete Hegseth.”

It was Hegseth, now a Fox News c0-anchor of the weekend edition of “Fox & Friends,” who exclusively reported approximately two weeks ago that Trump would take “imminent action” on all three cases.

The third service member, Navy SEAL Chief Eddie Gallagher, was demoted from Chief Petty Officer, a rank of E7, to Petty Officer First Class, an E6, as part of his sentence on a conviction of posing with a corpse.  In early July, Gallagher was acquitted of all other charges, which included premeditated murder, attempted murder, aggravated assault, and obstruction of justice, among others.

The demotion would have affected his military pension by approximately $200,000, The New York Times quoted Gallagher’s attorney as having reported following Gallagher’s sentencing last summer.

On March 30, Trump had ordered the Navy to move Gallagher from “the brig” to more amenable quarters as he awaited trial.

“After eight combat deployments, the highly decorated Gallagher has 18 documented brain injuries in his medical files,” The Navy Times reported on October 7, citing Gallagher’s attorney’s clemency request made to the Chief of Naval Operations (CNO).

“Before the prosecution of Special Warfare Operator First Class Edward Gallagher, he had been selected for promotion to Senior Chief, awarded a Bronze Star with a ‘V’ for valor, and assigned to an important position in the Navy as an instructor. Though ultimately acquitted on all of the most serious charges, he was stripped of these honors as he awaited his trial and its outcome. Given his service to our Nation, a promotion back to the rank and pay grade of Chief Petty Officer is justified,” the White House statement reads.

In mid-September, The Post & Email interviewed CEO and Board member David “Bull” Gurfein of United American Patriots (UAP), a non-profit which supported all three men to whom Trump provided clemency on Friday night.  UAP’s mission is to “preserve the rights” of accused service members, refer them to competent legal assistance and assist in their reintegration in society upon their release.

Our interview with Gurfein featured Lorance and three other imprisoned service members whose narratives are detailed at UAP’s website.  Success stories of those whose charges were dismissed, sentences reduced, or who received a presidential pardon can be read here.

Brown is a member of UAP’s Board of Advisors.

On Saturday The Post & Email contacted Gurfein for comment on Trump’s clemency orders, to which he responded:

This is a banner day regarding justice for those who support and defend our rights and who volunteer to go in harm’s way on our behalf. Each of us at United American Patriots is ecstatic the President has righted the wrongs faced by 1LT Clint Lorance, MAJ Matt Golsteyn, and Chief Gallagher.   In each of these cases, and many others, there is clear evidence of unlawful command influence, prosecutor misconduct, and improper investigator actions. Those who suggest the President’s actions will undermine good order and discipline within the Armed Forces are simply highlighting their own level of ignorance regarding each of these cases.

This is a clear warning to any commanders who side with political correctness, self-preservation, or personal promotion over the well being of our Warriors, it will no longer be tolerated.

The presumption of innocence will be maintained and the Rights of our Warriors will be preserved – That is what fosters and reinforces good order and discipline amongst warfighters.

I respectfully welcome any opportunity to discuss or debate the specifics of each of these cases, or any other case with which United American Patriots is involved, with any Politician, General Officer or  Bureaucrat who feels otherwise.
————————————-
Looking for all of your news in one place?  Try Whatfinger, your one-stop aggregator of news, opinion and everything else.