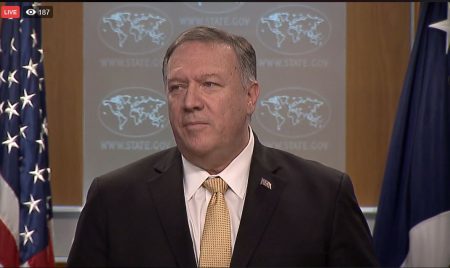 (Nov. 18, 2019) — At 2:30 p.m. EST, Secretary of State Michael R. Pompeo began a press conference by speaking about recent violence in Iran on the part of the dictatorial government against it citizens.  Pompeo additionally expressed concern for Iran’s reported continued enrichment of uranium.

At 2:32, he moved on to Iraq, where he condemned ethnic and religious violence and “corruption.”

Fourth, Pompeo said the State Department is deeply concerned about escalating violence in Hong Kong, where months-long clashes between civilians and police over proposed changes in speech and other freedoms by communist China have caused recent injuries and civil strife.

At 2:38, Pompeo took questions from reporters, one of which led to remarks on “Ukraine,” although Pompeo said he would not address the current “impeachment inquiry” under way in the House of Representatives.

Pompeo said that he “is proud” of what the Trump administration has accomplished with Ukraine, which continues to struggle with government corruption and developing a market economy. The fall of the Berlin Wall 30 years ago this month gave way to the emergence of numerous Soviet republics as free countries, to include Ukraine.

Reporters continued to press Pompeo on the impeachment inquiry; whether or not current Acting Ambassador to Ukraine William Taylor, who testified in the inquiry last week is effective; and recalled former ambassador Marie Yovanovitch.