by Jerry Kane, blogging at The Millstone Diaries, ©2019 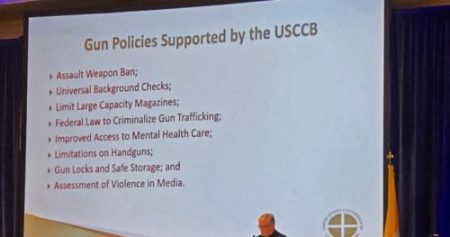 (Nov. 18, 2019) — “For many years, the Catholic bishops of the United States have been urging our leaders to explore and adopt reasonable policies to help curb gun violence. …[W]eapons designed to inflict extreme levels of bloodshed—too easily find their way into the hands of those who would wish to use them to harm others.” Roman Catholic Bishop Frank Dewane, Diocese of Venice, Florida

Bishop Frank Dewane of Venice, Florida, wants “common sense measures” to defeat gun violence, and Fred Kammer, S.J. head of the Jesuit Social Research Institute at Loyola University New Orleans, wants the USCCB to partner “with other faith communities” to offset “the corrupting power of the National Rifle Association and its influence on Congress.”

Catholic bishops in the United States have long supported restrictions on gun ownership and bans on high-powered and semi-automatic weapons. For example:

In 1994, bishops supported the Clinton Administration’s assault-weapons ban (allowed to expire in 2004).

In 2000, bishops called for “sensible regulation of handguns.”

In 2017, bishops pushed for legislative action on guns including a “total ban on assault weapons” and high-power weapons.

There are few overt statements from the Roman Catholic Church regarding the right of Americans to bear arms; however, the truth is the Vatican opposes private gun ownership and wants to strictly limit and eventually eliminate Americans’ God-given right to bear arms.

Pope Francis has said that gun manufacturers and gun dealers aren’t interested in the word of God and can’t be Christians because they “fabricate death, they are merchants of death and make death into a trade.”

And in their November 2000 publication, “Responsibility, Rehabilitation and Restoration: A Catholic Perspective on Crime and Criminal Justice,” the bishops stated, “we support measures that control the sale and use of firearms and make them safer — especially efforts that prevent their unsupervised use by children or anyone other than the owner — and we reiterate our call for sensible regulation of handguns.”

Obviously the Vatican promotes a double standard—protection for me but not for thee. Pope Francis and Vatican personnel are protected by the Vatican City Gendarmerie, a highly-trained and well-armed professional security staff equipped with submachine guns, which are illegal in the US without a valid permit.

Roman Catholic gun owners and patriots who disagree with the Church’s double standard and rejection of gun rights should contact the Conference of Catholic Bishops with their concerns.

One Response to "U.S. Catholic Bishops Push for Legislation to Restrict Gun Rights"