Perjury, a Mistake, or Misinformation?

(Nov. 15, 2019) — During a public hearing with the House Intelligence Committee on Friday on a Democratic-led “impeachment inquiry” of the president, former U.S. Ambassador to Ukraine Marie Yovanovitch testified, in agreement with Chairman Adam Schiff, that former Ukrainian Chief Prosecutor Yuriu Lutsenko “recanted” his claim made on March 20 to John Solomon, then of The Hill, that during her tenure she provided Lutsenko “a list of people whom we should not prosecute.”

In his March report, Solomon referred to Lutsenko as the “top Ukrainian justice official.”  Lutsenko left office in August, four months after Volodymyr Zelenskiy was elected Ukraine’s president on April 21, succeeding Petro Poroschenko.  It was Trump’s July 25 phone call with Zelenskiy that would set off the “impeachment inquiry” now led by Schiff and announced on September 24 by Speaker of the House Nancy Pelosi.

On Tuesday, The New York Times referred to Solomon as “The Man Trump Trusts for News on Ukraine.”

The Trump administration recalled Yovanovitch from her post in May. She had been confirmed by the U.S. Senate in August 2016 to a three-year term. During Friday’s testimony, she said she was unaware of the reason for her recall but acknowledged that ambassadors serve at the pleasure of the sitting president.

Yovanovitch further claimed that Trump attorney Rudolph Giuliani orchestrated a “smear campaign” which culminated in her removal which distressed her deeply.  She remains at the State Department, is teaching two classes at Georgetown University, and is receiving no less compensation than before she was recalled, she testified.

On October 1, NPR reported about a March 5, 2019 public address Yovanovitch gave on Ukraine in which she expressed concern for “intimidation and harassment” of journalists in the country, advocated for a strong Ukraine-U.S. relationship, and for “exposing corruption.”

In her speech that day, Yovanovitch said, “To ensure the integrity of anticorruption institutions, the Special Anticorruption Prosecutor must be replaced. Nobody who has been recorded coaching suspects on how to avoid corruption charges can be trusted to prosecute those very same cases.”

Under the heading “Attacks in Conservative Media, NPR, whose article was replicated by WGBH, reported of Yovanovitch’s March 5 statements:

Soon after this speech, Lutsenko struck back, suggesting the U.S. ambassador was really the corrupt one. On March 20, he spoke to Hill TV and claimed that Yovanovitch had given him a list of people not to prosecute.

The State Department denied the story, and Lutsenko later recanted his claim, but it had already spread.

In his March 20 article, Solomon reported that “The State Department called Lutsenko’s claim of receiving a do not prosecute list, ‘an outright fabrication.'”

Solomon, who has since left The Hill, published a column Wednesday in which he wrote that Ukrainian media “was abuzz” about Yovanovitch’s March 5 remarks. “And yes, Under Secretary of State Hale, got peppered with questions upon arriving in Kiev, specifically about whether Yovanovitch’s comments violated the international rule that foreign diplomats avoid becoming involved in the internal affairs and elections of their host country,” Solomon continued.

He additionally reported that George Kent, who testified to the committee publicly on Wednesday, wrote a letter in April 2016 communicating that an investigation into the Soros-funded Anti-Corruption Action Centre, with which the State-Department confirmed to Solomon it maintained a partnership, was “misplaced.”

In the letter, posted on Scribd and linked in Solomon’s article, Kent wrote on page 2: 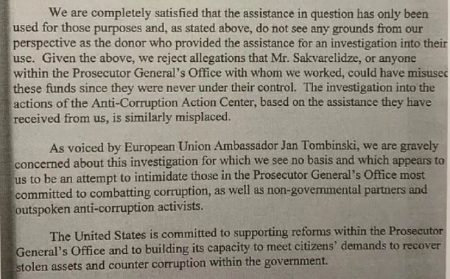 NPR and other outlets have reported that Lutsenko “recanted” his claim as to Yovanovitch’s demand that certain entities not be investigated, but Solomon contradicted that report on Wednesday:

As the story of the U.S. embassy’s pressure spread, a new controversy erupted. A Ukrainian news outlet claimed Lutsenko recanted his claim about the “do-not-prosecute” list. I called Lutsenko and he denied recanting or even changing his story. He gave me this very detailed response standing by his statements.

But American officials and news media eager to discredit my reporting piled on, many quoting the Ukrainian outlet without ever contacting Lutsenko to see if it was true. One of the American outlets that did contact Lutsenko, the New York Times, belatedly disclosed today that Lutsenko told it, like he told me, that he stood by his allegation that the ambassador had provided him names of people and groups she did not want to be targeted by prosecutors. You can read that here.

It is neither a conspiracy theory nor a debunked or retracted story. U.S. embassy officials DID apply pressure to try to stop Ukrainian prosecutors from pursuing certain cases.

The link in the first cited paragraph directly above leads to Lutsenko’s reported statement to Solomon: 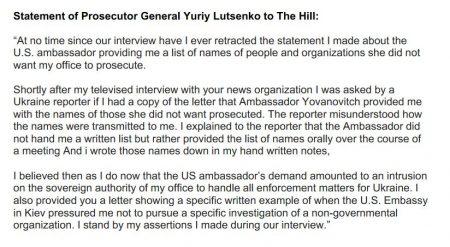 “After Yovanovitch gave a tough speech in March urging the government to sack a senior anti-corruption official, she came under fire from Lutsenko, conservative voices in the U.S. and the president’s eldest son, Donald Trump Jr.,” CNBC reported on October 11 after receiving leaked excerpts of Yovanovitch’s closed-door testimony to members of three House committees, including the Intelligence Committee.

Schiff had warned Republicans that divulging the contents of any depositions conducted in the impeachment matter would become the subject of ethics investigations.  Conversely, Republicans have accused Democrats of “selective leaks” to the media to support their narrative that Trump committed impeachable offenses in his dealings with Zelenskiy and Ukraine in general.

On Friday, MediaMatters referred to Lutsenko’s alleged “recantation” of his claim of a “do-not-prosecute” list by linking to an article in which Lutsenko made no such statement.  MediaMatters reported:

During the morning break in Friday’s House Intelligence Committee impeachment inquiry hearing, Fox News anchor Martha MacCallum attempted to relaunch part of the right-wing smear campaign against the day’s big witness, former U.S. Ambassador to Ukraine Marie Yovanovitch: that she had presented Ukrainian Prosecutor General Yuriy Lutsenko with a list of people to not prosecute — a claim which Lutsenko has already recanted.

On America’s Newsroom, MacCallum said, “There is some suggestions that the word ‘list’ is what is not very accurate here, but that the sentiment behind the idea that there were people that they didn’t want prosecuted may bear out. And we’ll see what the Republicans’, you know, line of questioning does to establish any of that, if it’s there.”

The link MediaMatters provided in its first paragraph leads to an article at Unian Agency bearing the title, “Ukraine Prosecutor General Lutsenko admits U.S. ambassador didn’t give him a do not prosecute list” dated April 18, 2019.  The article contains discussion of a “do-not-prosecute” list between Yovanovitch and Lutsenko but no recantation by Lutsenko, to which Solomon referred in his November 13 column.

Perjury, a Mistake, or Misinformation? added on Friday, November 15, 2019

2 Responses to "Perjury, a Mistake, or Misinformation?"