“IT NEVER GETS BETTER”

(Oct. 30, 2019) — [The music in this editorial was heard in the transit barracks in Subic Bay during the time of this story.]

“So it came down to getting killed or getting court-martialed.”

“That’s the way you saw it? You could’ve followed orders and waited for the pickup; why didn’t you?”

“When did you learn that?”

“When we pulled up to the gate, that’s when; what do you think? The plane skidded to an abrupt stop when the pilot was killed; the other one was injured and we were all pretty shook up. The radios were shot-up; some of the crates busted open and instead of bandages there were grenades.”

“We were getting shot at, that’s what happened, so we grabbed what we could and ran – make that crawl on hands and knees, dragging the wounded and boxes of ‘humanitarian supplies’ — to some rocks, which were only about 20 yards away.”

“Why were they shooting at you? Weren’t you there to deliver those crates to them? So why did they shoot at you? One would think they would’ve welcomed you;that’s what I think.”

“Think whatever you want, but the pilot didn’t die of old age; the plane was wrecked. The pilot was shot and the plane didn’t land straight or stop slowly. It was chaos; people moaning and groaning, and don’t forget bullets striking the plane, and like if that wasn’t enough, we could smell fuel so no one lit up. And it was dusk and it gets dark fast, so it was a little confusing, okay?”

“You mentioned water a couple of times, didn’t you?”

“Because we didn’t have any, that’s why. I didn’t like the idea of not drinking cool wet water whenever I wanted.”

“You didn’t volunteer for this mission, did you?” 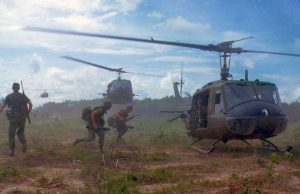 “None of us did. Heck, we were lounging around the transit barracks when this Marine Sergeant walks in and said we all just volunteered for some ‘humanitarian mission’; won’t take long; leave everything behind; no wallets or dog tags; no nothing, and off we went to the air strip, the very one I landed on a week before.”

“How many of you volunteered?”

“You’re a real comedian, aren’t you? Eight or so. We piled into a deuce and a half and drove to the strip where we made a chain gang and loaded a bunch of crates into the plane. We were given dungaree shirts with no markings. What? I told you earlier, a high-wing twin-engine plane. Props. No, it wasn’t a DC-3  And no markings, not even a number on the tail.”

“So how do you know so much about planes?”

“Maybe because I piloted some and my dad is a commercial airline pilot. Yes, it took two of us to load each crate.”

“Do you have any more to say?”

“Look, I know this is being recorded and you’re trying to trip me to say something so you can spin the story any way you want, but I’m just telling you how it went down.”

“But you disobeyed a direct order from a superior officer. He ordered all of you to sit tight that night and help would arrive in the morning.”

“Well, maybe he wasn’t an officer; after all, none of us wore any identification. I could’ve told him I was an Admiral.”

“He told you he was a Captain in the Army.”

“That he did, but he wasn’t in the best shape to tell anybody anything since he was wounded.”

“So you took it upon yourself to lead a bunch of strangers to find the bad guys’ camp, in the pitch dark, and wipe them out before they came back at dawn to wipe you out; is that the way you saw it?”

“Plus I was thirsty.”

“You have one serious attitude, sailor.”

“Born of being a deck-ape for nine months, so there: I earned my attitude, how about you, Mr. ONI?”

“You’re in pretty serious trouble, you know that?”

“No, I’m not: you are or whoever you represent. I saved everyone who wasn’t already dead. And the so-called humanitarian supplies were weapons, not bandages, and what country were we in? I finished in Vietnam, but in what country did that no-number plane crash?”

“How did you do it; how did you convince total strangers to crawl a half-mile through the jungle and take the sentries out with knives and then surrounding the camp and kill everything inside their perimeter with grenades and machine guns? How in the heck did you convince them to follow you?” 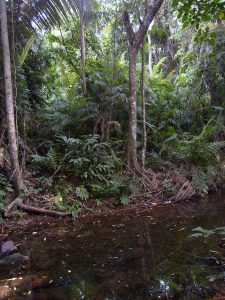 “It wasn’t a Tarzan jungle. Piece of cake: I told them the philosophy of the deck ape, the lowest of them all. I said, ‘You think this is bad; just wait for it to get worse;’ that it never gets better, only worse. And I told them I wasn’t waiting around for it to get worse and then I started dragging a wounded dude – shot in the leg – and they all followed. And it worked. And here I am, and I guess most of the others are in the hospital. Look, my lips are sealed: I won’t say a word if you don’t press charges; we got a deal?”

And that’s how it ended, and I haven’t said a word for fifty years. The only reason I even mentioned it now is because it’s one heck of a story that happened a long time ago in a faraway place.

I paid a pretty high price for not dying then: 17 years of nightmares and then every night thereafter worried about having another one. And would I do it all over? Think about it: the chances of pulling off a stunt like that had to be a million to one, so the way I see it, I won the lottery decades before there was one.

[An interesting footnote is that two years later, when I was in Valencia, Malta, just after Pueblo’s sister ship, the USS Liberty, was towed in after being strafed sitting off the coast of Egypt during Israel’s Six-Day War, I went over to where it was docked and saw the Gunny from the Philippines on the deck, but this time was dressed as a Naval officer. I wasn’t allowed on the ship and was escorted off the pier.]

[So why write this now? Because recently some of our troops did an extraordinary job in taking Al-Baghdadi out, but in the military many people do extraordinary things every day that never see the light of day. I was injured once and was offered a Purple Heart, but others were worse off than myself so I declined.]

[One last point: it’s a race: will Trump expose the Deep State before the Deep Dtate can take him down?  The closer it gets, the more FOX NEWS is becoming more supportive of the other side, which is why I recommend NEWSMAX. From Chris Salcedo’s morning show to Wayne Allyn Root in the evening, with an hour of Michelle Malkin Investigates thrown in, it’s just what ‘Pulse’ would be if we had the money, the resources and the talent.]

2 Responses to "Winning the Lottery"