(Oct. 22, 2019) — Bridgeport, CT – Mayor Ganim presented the Key to the City to the well-known and prestigious Quantico Marine Corps Band in celebration of their thirty years performing at the annual Vincent Vizzo Columbus Day concert.

“Thank you to the men and women for providing enjoyment and inspiration each year in the City of Bridgeport– but also for your service to our Country,” said Mayor Ganim.

Chris Caruso, who has helped coordinate the Quantico Marine Corps Band’s participation annually said, “Each year, as we plan this trip, the Mayor has continually been supportive. So, thank you Mayor Ganim and thank you City of Bridgeport for all you do to make this possible.”

Randel Metzinger, U.S. Marine Corps Warrant Officer said, “We know we have a home here in Bridgeport. Anytime we come to Bridgeport, we feel like family.”

Key to the City ceremonies are an honorary distinction for public services and is a gesture of trust and kindness made by municipalities to celebrate non-resident contributions.

PHOTOS OF THE MARINE CORPS RECEIVING THE KEY TO THE CITY! 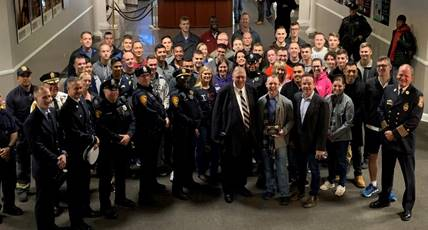