(Oct. 21, 2019) — On Sunday, The Post & Email interviewed Mr. Andrew Ewing, a former Tennessee prison inmate who spent a quarter-century behind bars under the federal “felony murder” statute as a result of his presence in a place at a time when a murder was committed by someone else.

Ewing is the brother of Sharen Rooks, with whom we spoke in May regarding a federal lawsuit filed by 14 Tennessee state inmates alleging that they were held in confinement past the expiration of their sentences.

Ewing fell into that category, Rooks told us at the time.  “He has been incarcerated for 25 years and is on his way out.  He also had an expiration date of March 20; it is now May 20, and he’s still there and had to go up for parole in December and again on June 13,” she said.

An entrepreneur, Rooks has been active in the Memphis community and interviewed thousands of state and federal inmates over more than two decades, she told us in our interview of May 20, 2019.

Approximately three weeks before Rooks reached out to us, we had published an article detailing a federal lawsuit filed by six inmates at the Shelby County jail alleging unconstitutional confinement resulting from lack of a grand-jury indictment.  The lead plaintiff is Quartez J. Gary, who recontacted us last month to say he has now spent five years in the Shelby County jail without resolution of pending charges against him.

Article I, Section 9 of the Tennessee Constitution states, “That in all criminal prosecutions, the accused hath the right to be heard by himself and his counsel; to demand the nature and cause of the accusation against him, and to have a copy thereof, to meet the witnesses face to face, to have compulsory process for obtaining witnesses in his favor, and in prosecutions by indictment or presentment, a speedy public trial, by an impartial jury of the county in which the crime shall have been committed, and shall not be compelled to give evidence against himself.”

Our lengthy interview with Ewing revealed an extensively self-educated, soft-spoken and articulate man of 49½ years of age who stated a commitment to effect change to not only Tennessee’s criminal justice code, but those affecting others across the country.  When we asked, “How are you?” at the outset of the interview, he responded, “I’m blessed.”

A letter written last year from Christi A. Davidson of Customized Medical Needs, a Memphis facility providing drug- and alcohol-abuse treatment, lauded Rooks’s volunteer work in the community, and the “mentorship and guidance” it was anticipated she would render to Ewing after his release.  “I hereby attest that Mrs. Sharen Rooks has sacrificed hundred hours of community service and under her mentorship and guidance, Mr. Andrew Ewing will be able to reap the benefits and rewards of his contributions to the community and others who lack the ongoing and non-compromised support she can provide,” the letter reads [sic].

A request for parole Ewing made in September of last year is accompanied by numerous letters commending him for his conduct and work ethic while incarcerated.  A common thread in many of the letters recommending parole was that Ewing showed “respect” to others and and took “pride” in the work he performed while incarcerated.

Ewing was granted parole in June and released in July.  As he remains under state supervision, he has not yet reunited with many of his relatives, he told us. A component of his sentence is that he will be on parole “for the rest of my life,” he said.

During the interview, Ewing explained the basis for his lengthy sentence imposed after he entered into an altercation with another man:  the “felony murder” doctrine, codified into law as U.S.C. 1111,” which Ewing said in his case was enhanced by the 1994 crime bill signed by President Bill Clinton known as P.L. 103-322.

The 1994 law, which intersected with the elements of the felony murder statute, strove to protect vulnerable citizens such as the elderly, women and victims of crime and increased penalties for many felonies including arson, manslaughter, “drug trafficking near public housing,” and “civil rights violations.”

A 1994 report issued by Indiana University’s Maurer School of Lawort related of the federal felony statute: 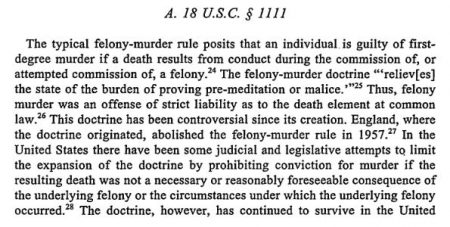 Further, the report states, “‘malice aforethought’ remains a necessary element of every murder, be it murder in the first degree, murder in the second degree, or felony murder” (p. 539).

The “Violent Crime Control and Law Enforcement Act of 1994,” which Clinton later said he regretted signing, provided additional funding to state correctional institutions and for “truth-in-sentencing incentive grants” to encourage states to enforce full or nearly-full sentences for perpetrators of violent crimes.

According to U.S. Legal, “Truth in sentencing laws are enacted to reduce the possibility of early release from incarceration. It requires offenders to serve a substantial portion of the prison sentence imposed by the court before being eligible for release. Previous policies which reduced the amount of time an offender served on a sentence, such as goodtime, earned-time and parole board release, are restricted or eliminated under truth-in-sentencing laws. The definition of truth in sentencing laws and amount of time required to be served are primarily governed by state laws, which vary by state.”

The bill had the effect of lengthening prison terms and thereby exacerbating the problem of  “mass incarceration,” Vox reported in July 2015 as Hillary Clinton sought the Democratic presidential nomination.  “There were two big reasons the prison population rose so drastically from the 1980s to the late 2000s. One of them was, yes, that more people went to prison. But the other was that the people who went to prison were going for longer,” the outlet reported.

An article at Findlaw explains of the “felony murder rule” or “doctrine”:

It’s possible to be charged with first-degree murder under the felony murder rule even if there’s no intent to kill. All that’s necessary is the participation in the commission of a felony, where a death occurs during that felony, even if the defendant wasn’t the one who killed the victim. Typical situations include:

My situation, at the end of the day, affects most of the guys within the prison system.  One of the problems our system has is the felony murder statute that was put in place under the Bill Clinton administration. Under the felony murder statute, say, for example, in my case, I wasn’t the shooter; I wasn’t the one who killed the young man.  I regret that happened.  However, my role in that situation was that I merely got into an altercation with another man, and my co-defendant shot a gun in the house and accidentally, the bullet went through the door and killed a young man who we never saw.

Under the felony murder statute, I’m just as guilty as the shooter. So my supporters always asked, “How can two people shoot one gun?”  There’s clear evidence that the shooter, in my case, confessed to the shooting; I have a handwritten letter from him that was never submitted during my trial.  In this experience, I ended up doing 25 years, four months and three days, the same amount of time the shooter did.  All I did was get in a fight with another man, and that man didn’t die.  So the parallels don’t make sense — that I went to prison, did over a quarter of a century, and my only role was that I just got in a fight.

I understand that I should have been held accountable and punished; I get that, but to be punished at the same level as the actual perpetrator to me defies human logic.

That’s one of the main dilemmas that we have under the sentencing law passed by the Clinton administration.  I tried to sever my case from the co-defendant so I could get the original charge I was supposed to have, but when you have a public defender, you get only so much service.  We all know how this system works.

I have documentation, transcripts that can show what happened in my case, and that I’m not the only case which falls into this category.  I think that the felony murder statute should be redone, and I’m willing to be a part of the prison reform law. I’m also on the board of The Power Complex to do that.  At the end of the day, I shouldn’t have gotten more than 3-10 years.  Even the people on the parole board had empathy for me.

Here’s the problem: I’m not the only “Andrew.” There are 100 more Andrews in the same dilemma under the felony murder statute.  Under the Bill Clinton administration, he gave the states a lot of money to implement the felony murder statute, and what happened was they put in place where you had only one year to file your appeal. It is flawed as well.  I could show you some things in my case, and I have documents and transcripts and exhibits that would blow you away.  If you see these documents and exhibits I have, you will understand the injustice and the corruption.

I did over a quarter-century.  I was charged with capital murder. They threw out the “premeditated“; they realized that it wasn’t planned and understood that the whole incident was an accident. I was young and naïve; I made a bad choice to solve a problem by fighting.  In the midst of that bad decision, someone died.  But I never saw the person who was killed; I was not the perpetrator of the situation.  They threw out the first-degree charge and said it wasn’t planned, but they said, “Well, OK, then, we can get him on time if we get him under the felony murder statute.” That’s how they boxed me in and had me do a tremendous amount of time.

But here’s the thing: my nightmare’s not over with. I’m on parole for the rest of my life.  That’s amazing. When you take my case, and you see what role I had in this whole situation, to be on parole for the rest of my life is unfathomable.  I’ve done 25 years, four months and three days.  I’m currently doing an after-care program which our governor, Bill Lee, supports.  I’m a member of the Men of Valor program.  I choose to go there so I can take my time to get re-acclimated back into the community.  Although I have an enormous support system, I just didn’t want to put the burden on my immediate family. I’m single; I have no obligations; my kids are grown; unfortunately I missed out on the best part of their lives; at the end of the day, I chose this path so I could take my time to get re-acclimated and not feel the weight of the world on my shoulders.

My goal is to help guys who are in my situation currently or in the past to try to help change some of these laws.  It’s not just African-Americans; I’m talking Caucasian, Hispanic…the Bill Clinton statute did more harm to our country than any statute that we ever had.

Editor’s Note:  Ewing’s story will be continued in a future installment.