“UNBECOMING OF A SPEAKER” 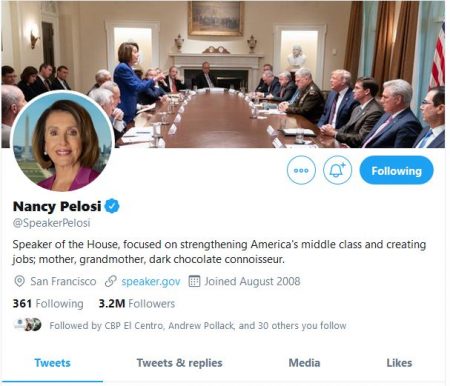 (Oct. 20, 2019) — On today’s “Sunday Morning Futures,” House Minority Leader Kevin McCarthy (R-CA23) told host Maria Bartiromo that during a Wednesday meeting at the White House concerning the deteriorating situation among Turkey, Syria and the Kurds since President Trump announced a withdrawal of U.S. special forces, Speaker of the House Nancy Pelosi told Trump, “You just wait to see what we do.”

McCarthy said he interpreted Pelosi’s words as a “threat” over the “impeachment inquiry” she launched on September 24 apparently based on a “whistleblower” report alleging that Trump used the power of his office to pressure Ukrainian president Volodymyr Zelenskiy to interfere in the 2020 U.S. presidential election.

The White House transcript of the call, which was reported not to be verbatim, but rather, a composite of the recollections and notes taken by national-security personnel who listened to the call, was released hours later revealing that Trump and Zelenskiy discussed a number of topics, spending only seconds on Trump’s request of Zelenskiy to launch an investigation into former Vice President Joseph Biden’s son Hunter as to his dealings in the country beginning in 2016, when his father became the Obama regime’s liaison to allegedly assist in purging Ukraine of political corruption.

In 2016, Hunter Biden, who reportedly has suffered from drug addiction and was consequently dismissed from the U.S. military, was hired to serve on the Board of Directors of Ukrainian energy company Burisma Holdings, for which his experience was virtually non-existent and for which he was paid $50,000 monthly.

In an interview with ABC News last week, Hunter Biden said that he “probably” would not have been asked to serve on the board had his last name not been “Biden.”  He did, however, state that his service on the board of Amtrak and in other capacities was roughly equivalent to that of others serving on Burisma’s board.

After Wednesday’s meeting, Pelosi changed her Twitter account profile to feature a photo of her standing and pointing at the president, who sat across the table from her, for which she was widely lauded by her base.  Pelosi was reported to have angrily stormed out of the room with her Senate counterpart, Chuck Schumer. shortly thereafter.

Both Trump and Pelosi accused one another of having a “meltdown” during the meeting.  Pelosi and Trump disagree over who requested the meeting, ABC News reported.

On Friday, Pelosi tweeted a rotating graphic claiming that Trump “and his lawyer confessed to” pressuring “a foreign country to interfere in our elections.” 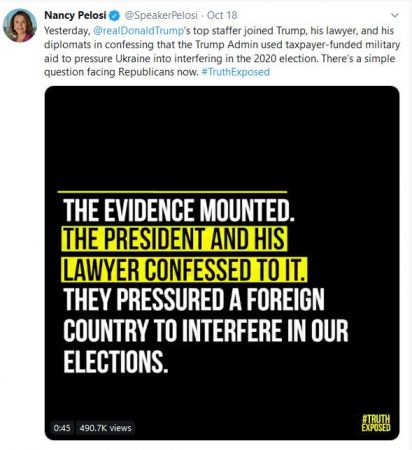 Trump has insisted his call with Zelenskiy was “perfect” and pointed out that Joe Biden is not yet, and may not be, the Democratic 2020 presidential nominee.

Some Republicans have said that Ukraine interfered in the 2016 election in favor of Democrats, and investigative journalist John Solomon, formerly of “The Hill,” has reported on interviews and documents he has received alleging such assistance coordinated with the Obama regime.

In January 2017, Politico reported, “Ukrainian efforts to sabotage Trump backfire:  Kiev officials are scrambling to make amends with the president-elect after quietly working to boost Clinton.”

Following Trump’s announcement of U.S. troop withdrawal, Turkish forces invaded northeast Syria, which has been a stronghold of the Kurds, who officially have no country to call their own.  A civil war has ensued in Syria since 2011, following the first signs of the “Arab Spring” touted by the Obama regime as a pro-democracy movement in the Middle East.

McCarthy described Pelosi’s conduct in Wednesday’s White House meeting as “a pattern when she doesn’t want to come to a solution.” He said that the meeting began with the distribution to all present of a letter Trump had sent to Turkish President Recep Tayyip Ergodan on October 9.  “The Speaker of the House, Nancy Pelosi, turns it over…sets it right down on the table to make a point to him that she’s not going to listen to him, and what’s really creeping into all this is impeachment,” McCarthy told Bartiromo.  “She couldn’t put that aside for one moment..If you watched her and Sen. Schumer, they said the exact same thing over and over until they felt they were at the moment that on their own script, they were supposed to get up and walk away. And the dirty little secret here, Maria, is the other Democrats stayed in the room and we had really a productive, normal meeting.  The only common denominator that disrupted us all was the Speaker of the House.”

On Thursday, the administration announced a 120-hour ceasefire after Vice President Mike Pence and Secretary of State Mike Pompeo flew to Ankara and met with Erdogan.

McCarthy characterized that meeting as having the potential to “save the Kurds’ lives, give them a time to actually move out, get a safe zone in there, and if we were to move on sanctions at that moment in time without having that discussion, without having that knowledge, could have sent the wrong message and actually created a much difficult situation for us. [sic] So it’s important that we have these conversations with Republicans, Democrats, and the administration, not get up and walk away…Before the Speaker of the House left the room, I listened to her, and she almost threatened the president. She didn’t use the word ‘impeachment,’ but you knew what she was talking about when she said something to the extent, ‘You just wait to see what we do.”

“That is unbecoming of a speaker, and more importantly, it’s not a real leader,” McCarthy concluded.

Later in the program, Bartiromo announced that Pelosi and other “lawmakers” are now in Jordan for further discussions on the situation in Syria.  Bartiromo’s next guest, Sen. Lindsey Graham, who had stridently opposed the U.S. withdrawal from Syria, said that a “demilitarized zone” is now being sought in the region and that he is “increasingly optimistic” that “historic solutions” could emanate from current negotiations.

Graham agreed with Bartiromo that he has changed his view on Trump’s decision to withdraw the troops following a phone call he shared with the president on Saturday.

Switching to the subject of Ukraine, Graham said he believes the nation “was involved in the 2016 election,” an allegation the mainstream media has dismissed as a “conspiracy theory” which has been “debunked,” and that as chairman of the Senate Judiciary Committee, he would like to hold hearings on the issue.

3 Responses to "McCarthy: Pelosi to Trump: “You Just Wait to See What We Do”"