ANOTHER YEAR DUE TO A “CLERICAL ERROR”? 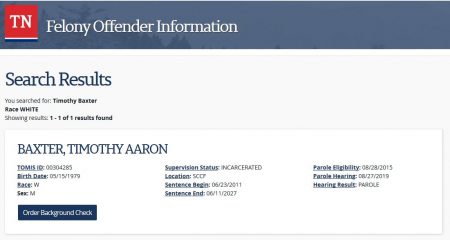 (Oct. 10, 2019) — Since 2015, The Post & Email has followed the story of Timothy Aaron Baxter, a Tennessee resident who has been incarcerated twice by the state and was recently granted parole.

Baxter expected to be released shortly after his successful parole hearing on August 27, 2019. However, he was then informed by the hearing officer that he was mandated to take a drug-and-alcohol program known as “Therapeutic Community” (TCOM) lasting approximately nine months and intended for inmates incarcerated for crimes stemming from substance abuse.

In an interview Wednesday morning with Lee Baxter, Tim’s father, Lee said that his son’s sentence is unrelated to any substance abuse and that a form completed by a Mrs. Thames at the Trousdale Turner Correctional Center (TTCC), where Baxter had been housed, was done so erroneously, relegating Tim to as much as another year in prison.

After a hearing in August 2018, Lee told us, the parole officer favored granting Tim parole, but the full parole board denied it on the basis of “the severity of the crime.” Lee said he did not attend the hearing but was present at the hearing which took place approximately six weeks ago.

In August of last year, Tim was not informed of any requirement(s) necessary for parole, Lee Baxter said, and the mandated class came as a complete surprise this year.  “I asked Tim if he knew about completing a program, and he said, ‘No, I didn’t know anything about that.’  His mother and I had a chance to comment, and I told the officer, ‘I don’t understand this coming up at this hearing that there’s some program that was recommended.  If it said on your notes that this was mandatory, I can understand that he hadn’t taken it and he’s going to have to stay in here.’  The officer said, ‘Well, I don’t know how the board will look at that.’  It came back from the board that parole was granted but he’ll have to take this program which is 9-12 months.”

On Wednesday afternoon, The Post & Email received the form, termed “StrongR” and completed on September 19, 2019 by Monica Thames from Tim Baxter’s mother, Linda Riddle.  The green markings are Tim’s, Riddle said, and intended to show that those items should have been removed from the report as not pertaining to his case. 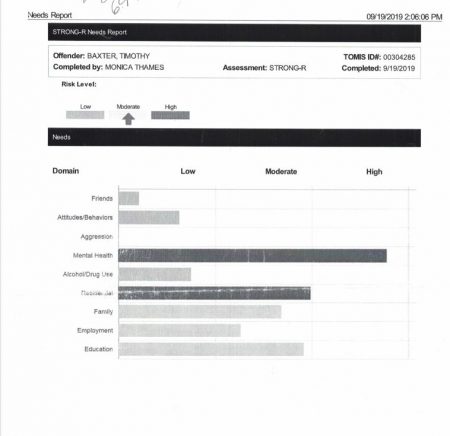 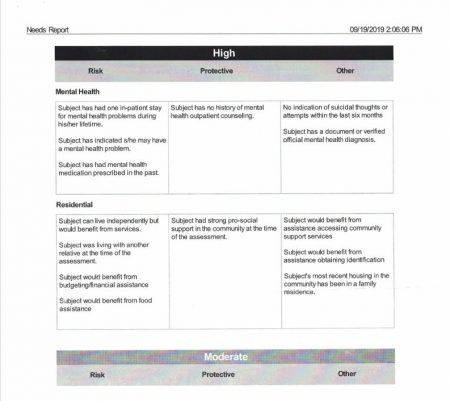 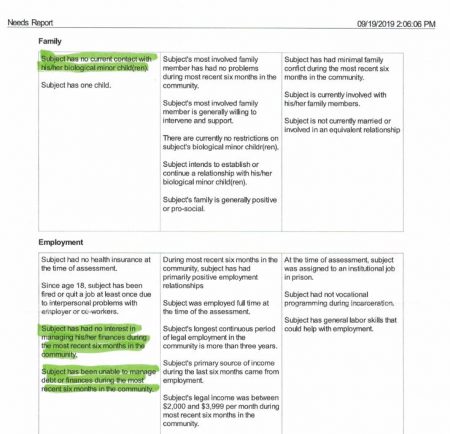 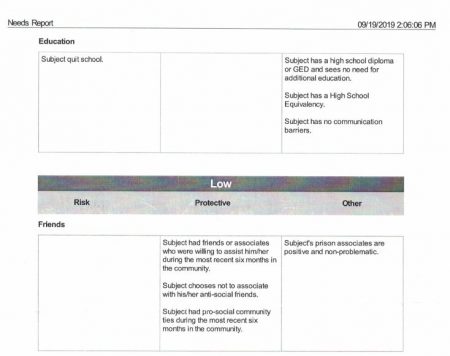 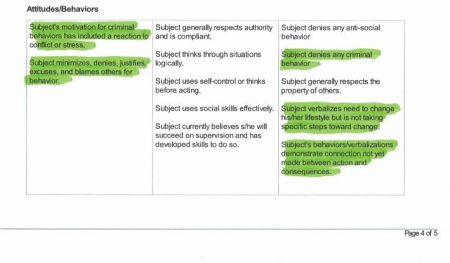 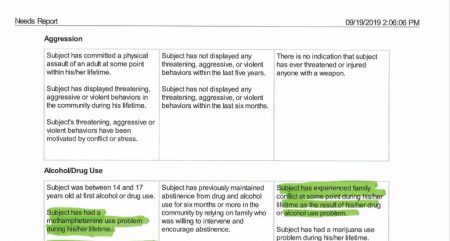 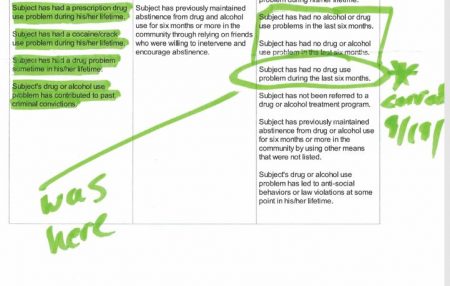 Baxter and Riddle have each approached their respective state representatives to request an explanation as to why Tim was granted parole but then mandated to take a program after the fact.  “It is unconscionable that they are now trying to reverse that decision with a claim that he must complete a so called ‘program’ that will in effect keep him incarcerated for another 7-9 months,” Lee said.  “They have had him for 8 years now…..why would this come up after he has been granted Parole?”

Along with the StrongR report, Riddle provided a handwritten note from Tim she obtained on Monday evening when she went to visit him.

A separate form containing question #68, to which Tim Baxter referred in his note (below), presented some of the same material as appears in the StrongR report but in question form, Riddle said, adding that Thames “destroyed” the document. 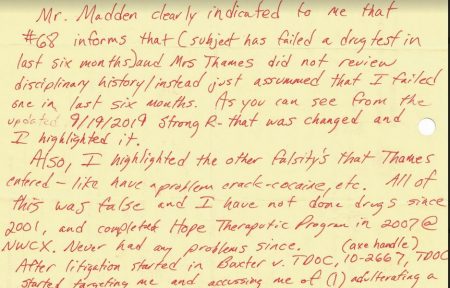 The Board of Parole’s determination letter states, with Tim Baxter’s handwritten notes: 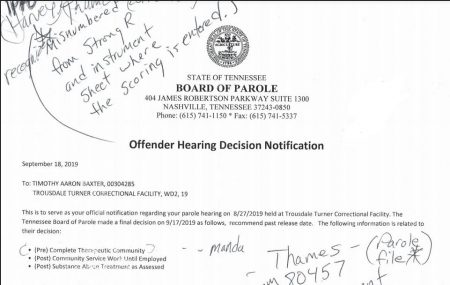 In a recent letter to Gov. Lee, Riddle wrote: 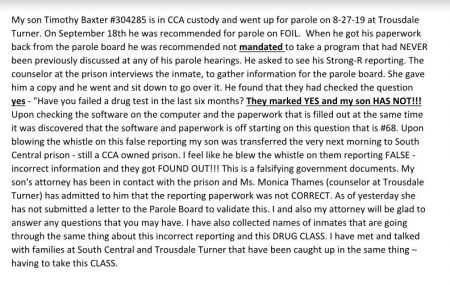 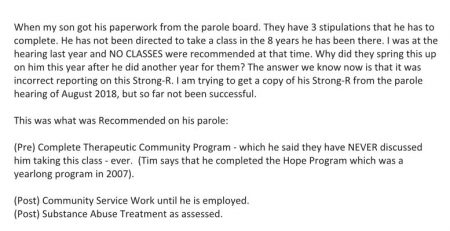 Further, Riddle wrote that the attorney hired to assist in effecting Tim’s release reported that he spoke with Thames, who reportedly said she made “a clerical mistake due to a new employee helping her.”  The attorney reportedly continued, “She is going to call IPO Harvey and correct the error. She believes the correction will allow Tim to make parole. And she will call me back as soon as you hear something from Harvey.”

Riddle’s letter to Lee then states, “This has not happened yet and Ms. Thames refuses to submit the letter to Ms. Rachel Hitt with the Parole Board council.” 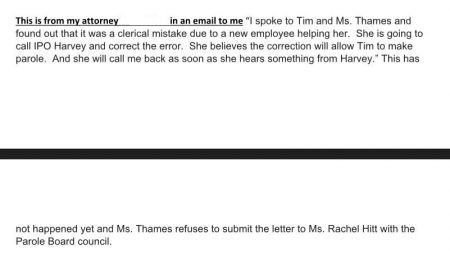 On September 20, Tim was relocated to the South Central Correctional Facility (SCCF), another prison operated by the private company CoreCivic, to enroll in the class, according to a September 30 email sent by TDOC Legislative Liaison Torrey S. Grimes to Jennifer Beckwith, legislative assistant to Lee Baxter’s state representative, Jay Reedy.

On 8/27/19, Mr. Baxter was granted parole with the pre-parole condition that he “complete therapeutic community”.    Therapeutic community (TCOM) is a residential, intensive 9-12 substance use treatment program.    So, he can only be released upon his participating and completing that 9-12 month treatment program.   Mr. Baxter is serving a sentence for Aggravated Assault and Felony Failure to appear out of Madison County.    Those sentences do not expire until 6/27/2027.

On 9/20/19, Mr. Baxter was transferred from Trousdale Turner Correctional to South Central Correctional presumably so that he could be placed in the TCOM class more quickly.   It will be up to Mr. Baxter to willingly participate in the program.

Both Lee Baxter, as he stated in his interview with The Post & Email on Wednesday, and the attorney believe Tim was the victim of wrongful convictions, as evidenced by a letter the attorney wrote to the Board of Parole on August 29, 2019. 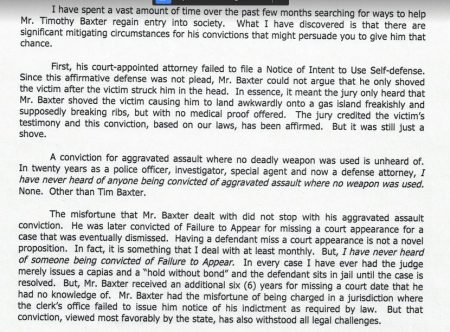 The Post & Email has reported previously on Tennessee inmates who said their parole was granted but that they had been held long past their release dates, at times for months or even exceeding a year.  At the conclusion of our interview with Lee, he said he is interested in hearing from relatives of other Tennessee inmates who have experienced similar situations as his son’s with regard to parole. Those who wish to contact Baxter may do so at baxcat51@gmail.com.

A voice message left with Tennessee Board of Parole communications representative Dustin Krugel on Thursday morning referencing Baxter’s parole was not responded to as of press time.

Update, 3:38 p.m. EDT:  After publishing, we received a message from Krugel stating that he has been in the position for only two weeks but that he would research Baxter’s case and send us any relevant information by email.

In another development, Riddle sent us the following at approximately 3:13 p.m.:

I just got off the phone with Rachel Hitt and now she is saying that Ms. Thames did not make any errors on the StrongR. I asked her if he failed a drug test and she would only answer me with – it’s for his best interest to attend this class so he will not come back to prison. She never answered me – no he has not failed a drug test. I told her that he could do programs on the street that would be better than what they are making him take – and she said well no they are not. I asked her why hasn’t he been put into this class last year and she said well it’s because CCA did not – I said I know why – they need to make more profits!! I am so distraught that they continue to hid the fact that they are keeping people to fatten the revenue of CCA owned prisons.

Update, 6:39 p.m. EDT:  The Post & Email is in receipt of the following response from Tennessee Board of Parole spokesman Dustin Krugel:

Upon reviewing Mr. Baxter’s case, the Tennessee Board of Parole in August 2019 recommended that the offender complete Therapeutic Community (TCOM), a nine-month drug and alcohol program treatment frequently recommended for inmates who have a history of substance abuse.

Upon successful completion of this program, which is administered by the Tennessee Department of Correction (TDOC), and barring a significant change in circumstances, the Board agreed that Mr. Baxter would be released to parole supervision.

For more information on Mr. Baxter’s sentence, I would suggest contacting the Tennessee Department of Correction.

Update, 8:28 p.m. EDT:  The Post & Email neglected to include the following letter from Baxter’s attorney to Rachel Hitt of the Board of Parole in the above report. 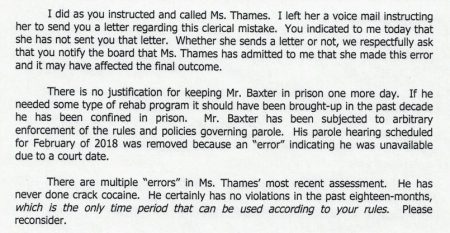