WHAT IS OF REAL “URGENT CONCERN?” 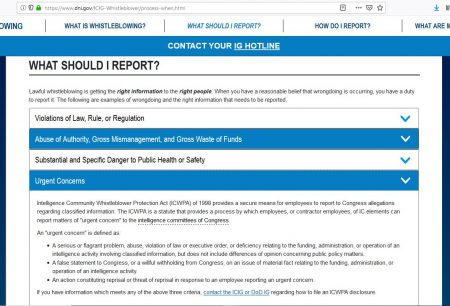 (Sep. 30, 2019) — The masthead motto of the The Washington Post (“WaPo”) is: “Democracy Dies in Darkness.”  The editors over there need to consider changing that motto to “The Home of Darkness.”

The latest confirmation of the reality that the mainstream media cares far less about democracy and far more about advancing the Democrat narrative that any falsehood which can be concocted and peddled to undermine President Trump should be propagated is seen here.  Relying (purportedly) on unidentified “current and former U.S. officials familiar with the matter…,” a WaPo headline recently asserted that Joseph Maguire, the Acting Director of National Intelligence, had threatened to resign if the White House tried to block or interfere with his scheduled testimony to members of Congress.  That testimony related to a “whistleblower” complaint filed August 12, 2019 by an anonymous intelligence community employee (rumored to be a CIA agent).  The complaint arose not from personal knowledge, but as a result of things the agent “had heard about … from others” regarding a July 25, 2019 telephone call between President Trump and the newly-elected president of Ukraine, Volodymyr Zelenskyy.

That headline, Virginia, was false… a manufactured prevarication… or, as they say on the street: a lie.  Mr. Maguire testified before the House Select Committee on Intelligence and laid to rest any suggestion that President Trump had pressured or instructed him to “stonewall” or to “tailor” his remarks.  On the other hand, Adam Schiff (D. CA), the intellectual midget chairing the committee, found no problem in putting into the record his own “parody” of what he surmised the phone call was about: a threat by President Trump to withhold military aid unless Zelenskyy concocted and dug up dirt on Joe Biden and his son, Hunter Biden.

Schiff paraphrased the transcript of what President Trump actually said thusly: “I’m going to say this only seven times, so you better listen good [sic, should be “well”]. I want you to make up dirt on my political opponent, understand, lots of it, on this and on that, I’m going to put you in touch with people.”   Schiff’s comparison to a Mafia shakedown was not lost on the Left, with the Democrat marionette New Yorker Magazine producing a cover showing President Trump and his counsel, Rudy Giuliani (complete with a toothpick in his mouth), shoving Uncle Sam, with his feet encased in concrete, off a bridge.  And they say conservatives are the ones who promote and harbor hate.  But wait…, there’s more.

It now turns out that the specific “Intelligence Community Disclosure of Urgent Concern” form which is required to be filed setting out the matters which the “whistleblower” believes to be of “urgent concern” was recently changed, in secret and without notice to the public.  While the whistleblower’s August 12, 2019 “letter” has been made public (plainly drafted not by the complainant, but by a lawyer or lawyers working for him/her (or some other group), the required form (if it was ever filed at all) has not been made public. The “ICIG CPD – ICWPA Disclosure Form” was, at some point in time between May 24, 2018 and August 2019, altered.  The alteration took the form of the elimination from the prior version of the form of a requirement that the “whistleblower” have “first-hand knowledge” of the transgressions being claimed.  The details of the unilateral clandestine alteration are found here.  That Federalist post merely underscores the importance of the work of independent, objective researchers.

The pre-August 2019 form included a paragraph entitled, in boldface, underlined capital letters: “FIRST-HAND KNOWLEDGE REQUIRED.”  The paragraph went on to explain that (a) “[i]n order to find an ‘urgent concern’ credible, the IC IG [Intelligence Community Inspector General] must be in possession of reliable, first-hand information…;” (b) the Inspector General could not “transmit information via the ICWPA [i.e., “Intelligence Community Whistleblower Protection Act,” 50 U.S.C. § 3033(k)(5)] based on an employee’s second-hand knowledge of wrongdoing…;” and (c) if the complainant thought that “wrongdoing took place, but can provide nothing more than second-hand or unsubstantiated assertions, the [Intelligence Community Inspector General] will not be able to process the complaint or information for submission as an ICWPA.” (Emphasis added.)

The revised August 2019 version removes that paragraph and replaces it with two boxes for the complainant to check.  The new form provides: “I know about the information I am disclosing here and: □ I have direct and personal knowledge [; or] □ I heard about it from others.” (Emphasis added).

What!?  Really!?  We are now careening down a really dangerous path based on hearsay, rumor and rank suspicion overheard, potentially, in a stall in the White House men’s restroom?  Is this what the vaunted Intelligence Community has come to?   Worse, the new form also states in Part 2, ¶ 1 that the whistleblower should “[b]e as specific as possible about dates, locations, and the identities and positions of all persons named.” (Emphasis added.)  So even if the “first-hand knowledge” requirement has been purged, the requirement remains that the identities of persons actually possessed of first-hand knowledge of the “wrongdoing” be identified.  Nowhere…, repeat, nowhere in the complaint are the identities of any of the purported “more than half a dozen U.S. officials,” and “multiple White House officials” claimed to be the source of the whistleblower’s “urgent concern” disclosed. 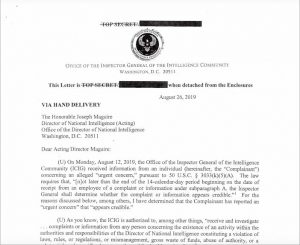 On August 26, 2019, Michael K. Atkinson, Inspector General of the Intelligence Community, sent a letter to Joseph Maguire, the Acting Director of National Intelligence, stating that he (Atkinson) believed that the complainant had reported an “urgent concern” that “appears credible.”  Later, on September 24, 2019, an attorney in the General Counsel’s Office of the Director of National Intelligence issued another opinion memo disagreeing with Mr. Atkinson’s conclusion that the complaint was a matter of “urgent concern,” but also concluding that if such a matter appeared “credible,” the matter should be instead “referred to the Criminal Division of the Department of Justice for appropriate review.”

And that, Virginia, appears to be where the whistleblower’s complaint may be headed.  Stay tuned, because even the new Disclosure of Urgent Concern form requires that the whistleblower acknowledge that, if the complaint is found to contain false or fraudulent information, he/she could be prosecuted for filing a false document and, on conviction, fined up to $10,000 and/or imprisoned for up to five years.  Did the complainant sign the form?  Interesting question…, no?