(Sep. 24, 2019) — At approximately 2:10 PM EDT, President Trump, who delivered an address to the United Nations General assembly earlier Tuesday, tweeted that he has made arrangements for the transcript of a telephone call he shared July 25 with Ukrainian President Volodymyr Zelinskiy which became the focus of an alleged “whistleblower” complaint made to the Intelligence Community Inspector General last week to be released Wednesday.

“I am currently at the United Nations representing our Country, but have authorized the release tomorrow of the complete, fully declassified and unredacted transcript of my phone conversation with President Zelensky of Ukraine….,” the first of Trump’s two tweets reads.

Neither the whistleblower nor his attorney has been identified, although in a tweet also on Tuesday afternoon, House Intelligence Committee Chairman Adam Schiff announced that the whistleblower indicated he wishes to testify to the committee and may appear “as soon as this week.” 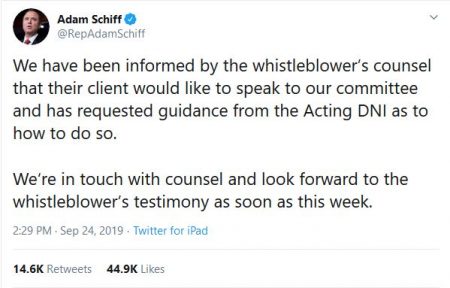 Since the complaint was made public on September 13 by Schiff, House Democrats, including Schiff, and some Democrat U.S. Senators, have called for impeachment proceedings to begin. Speaker of the House Nancy Pelosi has scheduled a 4:00 PM EDT meeting Tuesday purportedly to discuss ways the Democrat caucus might move forward with a plan.

Article II, Section 4 of the U.S. Constitution provides the remedy of impeachment of a president or other “civil officers of the United States” for the conviction of “treason, bribery, or other high crimes and misdemeanors.”

Some have termed Trump’s conversation with Zelenskiy “treason” without learning its substance.

An article at The American Spectator on Monday stated that the ICIG does not have the statutory authority to pursue a complaint over a policy difference with the President of the United States, but rather, is limited to investigating complaints of wrongdoing which would fall under the purview of the director of national intelligence (DNI).

The media initially reported that the complaint alleged that Trump made a promise to Zelenskiy, suggesting that a type of quid pro quo was put forth when Trump allegedly urged Zelenskiy to investigate Hunter Biden’s actions in a Ukrainian energy company between 2014 and 2015. However, Trump told reporters on Monday that the phone call in question was “perfect” and contained nothing inappropriate.

Hunter Biden is the son of Joe Biden, who declared his presidential candidacy in late April and was reported through last week to be the “frontrunner” in the large field of Democrats seeking the party’s nomination next summer.

During a campaign stop on Saturday, Joe Biden denied having spoken to his son about his membership on a board of directors for a Ukrainian energy company, Burisma, while a July 1, 2019 New Yorker interview of the younger Biden appears to contradict that claims.

For his part, Zelenskiy has said he was not “pressured” to take any official action during the July 25 call.

During an appearance at the Council on Foreign Relations in January 2018, Joe Biden bragged that after he pressured then-Ukrainian President Boris Boroschenko to fire a prosecutor who numerous reports say was looking into Burisma, Poroschenko quickly complied in the wake of Biden’s stated threatened withdrawal of promised U.S. aid.

Speaking to reporters on the South Lawn on Monday, Trump acknowledged his awareness that a number of administration individuals listen to his phone calls with foreign leaders and that a transcript is routinely prepared, indicating his willingness to release the transcript of the July 25 call after an administrative review.

On Tuesday morning, Fox News reported that the whistleblower does not have “firsthand knowledge” of the contents of the phone call.

Trump called Democrats’ strident calls for an impeachment inquiry a “continuation of a witch hunt” he considers the FBI and Special Counsel investigations into his 2016 campaign on the allegation that one or more of his aides “colluded” with the Russians to tip the outcome of the election.

One Response to "Trump to Release Transcript of “Whistleblower” Phone Call"