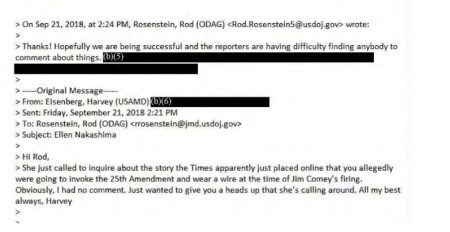 The New York Times originally reported the claims, which Rosenstein at the time denied.

The documents show an effort on Rosenstein’s part and that of others at the Justice Department to deny the claims made by The Times.

“This is the first official confirmation” of The Times‘s allegations, Fitton told Hannity.  “Here you have Rod Rosenstein and his team trying to craft a response, a non-denial denial to the allegations.”

In closed-door testimony to members of Congress last October, former FBI General Counsel James Baker said that after FBI Director James Comey was fired on May 9, 2017, Rosenstein spoke with then-FBI Deputy Director Andrew McCabe about “wearing a wire” to record Trump and invoking the 25th Amendment, which provides for the president’s replacement in the event of his disability.

At the bottom of the first page of emails, official Harvey Eisenberg informed Rosenstein that Ellen Nakashima of The Washington Post “called to inquire” about the New York Times article and that Eisenberg “had no comment” for her.  “All my best always,” he signed the email to Rosenstein.

Page 6 of the released emails show NYT reporter Adam Goldman informing the DOJ on September 20, 2018 that the article would be published the following day and asking for a “response” from then-DOJ spokeswoman Sarah Isgur Flores.

The Justice Department eventually approved the release of the statement:

After page 6, large areas of many of the pages are redacted.