“WE CANNOT RELY ON OTHER COUNTRIES” 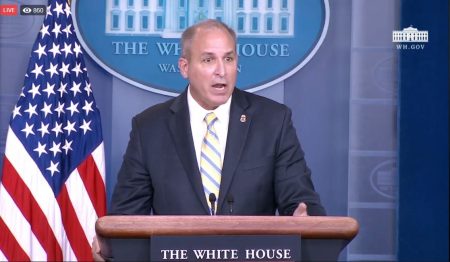 (Sep. 9, 2019) — Acting Commissioner of the Customs & Border Protection agency Mark Morgan gave an early-afternoon press conference on the progress of “the wall” along the nation’s southern border; changes in immigration policies and responses by the federal judiciary; Hurricane Dorian’s devastation of the Bahamas; national security and more.

The presser was streamed live on the White House’s Facebook page.

Morgan served as Border Patrol Chief during the Obama regime and left government early in the Trump administration.  In May, he was hired as Acting ICE Director, then moved to Acting CPT Commissioner in July.

Temporary protected status (TPS) will be granted to many Bahamians affected by the hurricane, Morgan said, while protecting America’s “national security.”

Morgan said that those in the Bahamas whose lives “are in jeopardy,” whether or not they possess “travel documents,” given the “humanitarian” purpose.  Approximately 1,400 have already arrived in the U.S. and been processed by the CBP, Morgan said.

If a person is found to be “inadmissible,” Morgan said, the person will not be returned to Bahamas since it is “unsafe,” but will be turned over to federal law enforcement.

Reporters asked questions about how much of “the wall” currently under construction is new; family-retention policies; and the reported decrease in the numbers of illegal aliens crossing the southern border since the administration extended the provision of the “Flores agreement,” which limited detention of illegal-alien children to 20 days, to 100 days.

Morgan said that Mexico has made a “significant” contribution to lowering the number of illegals crossing the border.  However, he maintained that “We cannot rely on other countries” to hold the numbers down.

Between 450 and 500 new miles of wall have been built, Morgan reported.

An agreement with Guatemala on immigration is “ready to go,” Morgan said, but has not yet been signed.

The presser ended at approximately 1:44 p.m. with a reporter directing a question to the then-empty podium, as Morgan had made his exit.