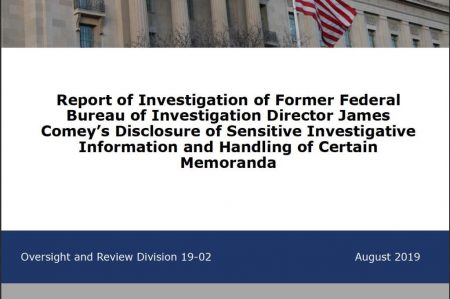 Hannity had said he believed the report contains 65 pages, but it totals 83.  On the subject of whether or not Comey released classified information to the media when he leaked memos he wrote about his interactions with Trump before his firing, the report states that the IG “found no evidence that Comey or his attorneys released any of the classified information contained in any of the memos to members of the media,” a fact Comey tweeted shortly after the report was published.

“And to all who’ve sent two years talking about me ‘going to jail’ or being a ‘liar and a leaker’ — ask yourselves why you still trust people who gave you bad info for so long, including the president.” 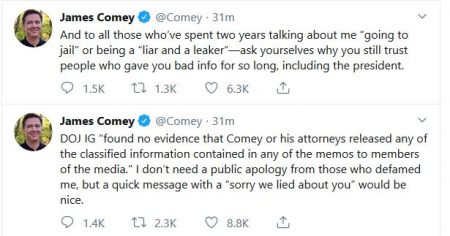 The responsibility to protect sensitive law enforcement information falls in large part to the employees of the FBI who have access to it through their daily duties. On occasion, some of these employees may disagree with decisions by prosecutors, judges, or higher ranking FBI and Department officials about the actions to take or not take in criminal and counterintelligence matters. They may even, in some situations, distrust the legitimacy of those supervisory, prosecutorial, or judicial decisions. But even when these employees believe that their most strongly-held personal convictions might be served by an unauthorized disclosure, the FBI depends on them not to disclose sensitive information.

Former Director Comey failed to live up to this responsibility. By not safeguarding sensitive information obtained during the course of his FBI employment, and by using it to create public pressure for official action, Comey set a dangerous example for the over 35,000 current FBI employees—and the many thousands more former FBI employees—who similarly have access to or knowledge of non-public information. Comey said he was compelled to take these actions “if I love this country…and I love the Department of Justice, and I love the FBI.” However, were current or former FBI employees to follow the former Director’s example and disclose sensitive information in service of their own strongly held personal convictions, the FBI would be unable to dispatch its law enforcement duties properly, as Comey himself noted in his March 20, 2017 congressional testimony. Comey expressed a similar concern to President Trump, according to Memo 4, in discussing leaks of FBI information, telling Trump that the FBI’s ability to conduct its work is compromised “if people run around telling the press what we do.” This is no doubt part of the reason why Comey’s closest advisors used the words “surprised,” “ stunned,” “ shocked,” and “disappointment” to describe their reactions to learning what Comey had done.

The report focuses on “the creation, storage, and handling of certain memoranda (Memos) written by former Federal Bureau of Investigation (FBI) Director James B. Comey,” it states on page 4.  There are seven memos in total, according to the report, written between January 6, 2017 and April 11, 2017.

Comey provided some of the memos to his “personal attorneys,” the report states on page 5 of the PDF (numbered “2” at the bottom), of which one contained classified information.  “Memo 4,” which the IG said did not contain classified information, was the memo Comey provided to close friend and personal attorney Daniel Richman, whose contents Comey reportedly instructed to read to a New York Times reporter.

Comey maintained copies of some of the memos in his personal safe at his home, the report states, supporting previous media coverage.

Pages 2 and 3 of the report explain that “Upon completing our investigation, pursuant to Section 4(d) of the Inspector General Act of 1978, the OIG provided a copy of its factual findings to the Department for a prosecutorial decision regarding Comey’s conduct. See 5 U.S.C.A. App. 3 § 4(d) (2016). After reviewing the matter, the Department declined prosecution. Thereafter, we prepared this report to consider whether Comey’s actions violated Department or FBI policy, or the terms of Comey’s FBI Employment Agreement. As described in this report, we conclude that Comey’s retention, handling, and dissemination of certain Memos violated Department and FBI policies, and his FBI Employment Agreement.4”

On page 7, numbered “4” at the bottom, the report differentiates between government records which must be preserved by law and agency policy and those of a personal nature.  “Federal” records include “personal notes,” the report states, “received or generated by the Director in the normal course of business.”