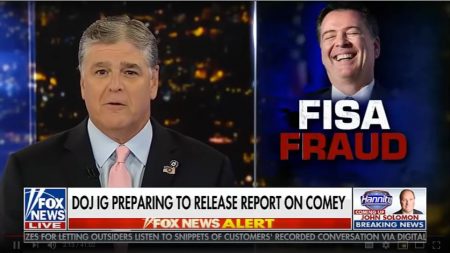 (Aug. 29, 2019) — According to “Hannity” host Sean Hannity and his first guest, investigative journalist John Solomon of The Hill Wednesday night, Thursday could be a day of revelations after months of waiting for classified documents from the Trump-Russia “collusion” probe to be made public and in the wake of an expected Justice Department Inspector General report on former FBI Director James Comey.

“The DOJ inspector general’s official findings on James Comey are now imminent, and it’s not looking good for, well, Mr. Super-Patriot, the guy who knows better than us,” Hannity said.  “We’re told that the report will strongly rebuke the disgraced former FBI director, document his utter lack of candor — that means ‘lying.’  And we’re also being told that the report the Inspector General is putting out tomorrow has referred Comey for federal prosecution for stealing government documents, leaking confidential government memos that detail conversations with the president, a clear violation of the Espionage Act…”

To this writer’s knowledge, Tom Fitton, president of Judicial Watch, was the first to state on Wednesday evening that an Inspector General report on Comey would be imminently released separately from an anticipated report on possible abuse of the Foreign Intelligence Surveillance Act by FBI and DOJ officials beginning in 2016.

Fitton made the statement on “Tucker Carlson Tonight,” which Hannity directly followed at 9:00 PM EDT. On what had been a quiet news day toward the end of the August congressional recess, Hannity immediately stated that not only is the “Comey” report expected, possibly on Thursday, but also that it is one of “three major reports” the Inspector General is expected to release in the near future.

“This report is expected to be the tip of the iceberg when it comes to Jim Comey,” Hannity said approximately a minute and a half into his opening monologue. “A criminal referral has, in fact, been issued,” he said at 7:53.

Hannity also revealed that his sources say that Attorney General William Barr has already decided not to criminally prosecute Comey over what the Inspector General is expected to say was Comey’s “lying and leaking” during the Trump-Russia “collusion” investigation, which began with the FBI in 2016 or perhaps before.

Comey was Barack Hussein Obama’s choice to succeed FBI Director Robert Mueller, who served an unprecedented 12 years as head of the nation’s “premier” law-enforcement agency. By congressional statute, the FBI director serves a ten-year term, but at Obama’s request, Congress permitted Mueller to serve an additional two years until September 2013.

According to the White House, Mueller was interviewed for Comey’s job within days after Comey was fired on May 9, 2017. On May 17, 2017, then-Justice Department Deputy Director Rod Rosenstein hired Mueller to serve as Special Counsel for the Russia investigation.

A month after he was fired, Comey revealed in congressional testimony that he leaked memos he wrote documenting his interactions with Trump to prompt a special counsel investigation into the Trump campaign and administration.

As for the “FISA abuse” report expected to be released in September, Hannity said Comey “is playing a starring role in that investigation” (1:50).  The report is anticipated to relate whether or not four FISA warrants obtained on former Trump adviser Carter Page were obtained illegally, three of which Comey signed.

The warrant applications used unverified information from the Christopher Steele-compiled “dossier” to which DOJ and FBI officials placed their signatures, affirming it was well-vetted.  “That’s where premeditated fraud on the FISA Court for the purpose of spying on a presidential candidate, a president-elect and a President of the United States were all obtained under false pretenses — fraud before a court — and were also used in an attempt to destroy a duly-elected president.  That’s how serious this all gets,” Hannity said. 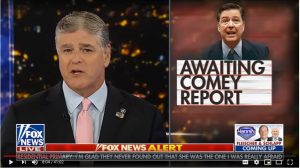 On Wednesday night, Comey, who often shares his thoughts on Twitter in a philosophical vein, appears to have made no comment.

Referring to a new book by former Assistant U.S. Attorney Andrew McCarthy in which McCarthy claimed that any counterintelligence investigation is opened with the knowledge of the sitting president, Hannity said that Obama “at some point…must be asked under oath, ‘What did you know about your counterintelligence investigation, and when did you know it?'”

He added that a future report will cover “Deep-State leaking.”

At 4:59 in the YouTube broadcast, Hannity brought on Solomon, who announced that the Trump administration is planning to formulate a new process for document declassification “as early as next week” to reduce the bureaucratic quagmire. “Tonight, my sources tell me there are three explosive documents from the Obama era that could be at the top of the list on this declassification process that could give us an entirely new story about what went on under President Obama’s secretary of state, Hillary Clinton.  One of those are some letters between the Iranian leaders and the president, President Obama, in which Obama promised the Iranians that they could keep their ability to enrich uranium…”