DiGenova: “When Is Barack Obama Going to be Interviewed…”

“…BY JOHN DURHAM AND THE FBI?” 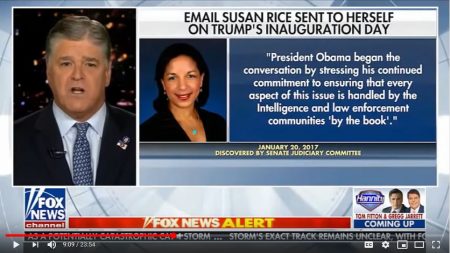 (Aug. 29, 2019) — On Thursday night’s “Hannity,” former U.S. Attorney for the District of Washington, DC Joseph DiGenova made the case for an FBI interview of former White House occupant Barack Hussein Obama concerning the Trump-Russia “collusion” investigation, which began as an FBI counterintelligence probe into the Trump campaign.

The discussion arose following the release Thursday morning of a DOJ Inspector General report rebuking former FBI Director James Comey for his handling of FBI documents, some of which contained classified information, in the months before he was fired on May 9, 2017.

DiGenova incorporated Obama into the mix after Hannity characterized emerging revelations as divided into “buckets,” As to “Bucket 3,” Hannity said, “There’s no counterintelligence investigation, Joe DiGenova, without a President of the United States’ approval,” a contention former Assistant U.S. Attorney for the Southern District of New York Andrew McCarthy affirmed.  Hannity then asked DiGenova to “walk us through” what he believes is the unfolding the “bucket” information.

“Today we learned what we already knew:  that Comey’s a liar and he violated the law…” DiGenova responded, followed with, “When all is said and done, when you get to the end of the road, the issue is Susan Rice’s January 20, 2017 email for the record where she outlines in great detail how President Obama knew about, authorized and instructed people to ‘operate by the book’ in a counterintelligence operation against Candidate Trump, President-Elect trump, and President Trump.  I want to know, ‘When is Barack Obama going to be interviewed by John Durham and the FBI?”

Durham is the U.S. attorney designated by Attorney General William Barr to investigate the origins of the Trump-Russia probe given that a special counsel’s 22-month, $31 million investigation found no evidence of the FBI’s allegations that the Trump campaign had “colluded” with Russia to affect the 2016 election.

The Senate Judiciary Committee discovered Rice’s email to herself documenting a January 5, 2017 meeting in the Oval Office which reads, according to the committee’s February 12, 2018 press release, “President Obama began the conversation by stressing his continued commitment to ensuring that every aspect of this issue is handled by the Intelligence and law enforcement communities ‘by the book’.  The President stressed that he is not asking about, initiating or instructing anything from a law enforcement perspective.  He reiterated that our law enforcement team needs to proceed as it normally would by the book.”

“Do you believe that will happen?” Hannity asked DiGenova, referring to his rhetorical question about Obama, to which DiGenova responded, “I believe it will.  In fact, there is no way you can finish this investigation without interviewing the former President of the United States because his national security adviser said, ‘Bingo, he was at the head of it.'”

DiGenova: “When Is Barack Obama Going to be Interviewed…” added on Thursday, August 29, 2019

10 Responses to "DiGenova: “When Is Barack Obama Going to be Interviewed…”"