“AS EARLY AS TOMORROW” 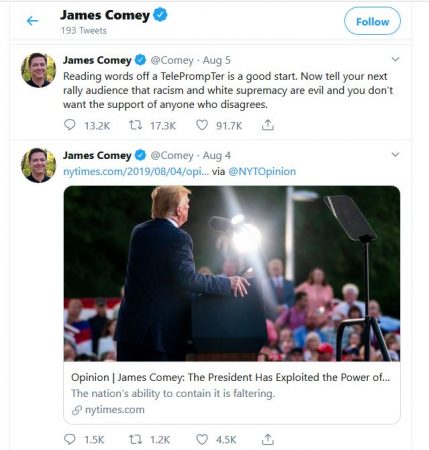 (Aug. 28, 2019) — On Wednesday’s “Tucker Carlson Tonight,” Judicial Watch president Tom Fitton told Carlson that the Justice Department’s inspector general, Michael Horowitz, is expected to release a report on the conduct of former FBI Director James Comey which will be distinct from a much-anticipated report expected in September on “FISA abuse.”

The inspector general does not have the authority to convene a grand jury or to initiate criminal prosecutions, although the office can make recommendations to the appropriate U.S. attorney if evidence gathered during an investigation warrants it, as it did with former FBI Deputy Director Andrew McCabe.

Fitton and Carlson discussed reports on Monday that the Justice Department is currently weighing whether or not to indict McCabe for allegedly lying to the inspector general during questioning regarding FBI leaks to the media in 2016.

Comey became a virulent opponent of Trump after his firing on May 9, 2017, admitting in congressional testimony a month later to having leaked memos he wrote on an FBI computer to an attorney friend, Daniel Richman, in the hope of prompting a special counsel investigation into whether or not anyone from the Trump campaign “colluded” with Russians to impact the 2916 election.

At the time, there already was an FBI investigation into both matters, according to closed-door congressional testimony by McCabe and other former FBI officials.

Eight days after Comey was fired, his FBI predecessor, Robert Mueller, was hired by then-Deputy Attorney General Rod Rosenstein to act as special counsel.  Twenty-two months later, Mueller delivered his report to the new Attorney General, William Barr, stating that insufficient evidence was found to support the “collusion” allegation raised by the FBI.

On the allegation of “obstruction of justice,” Mueller said his team reached no decision.  After conferring with others in the Justice Department, Barr and Rosenstein concluded that insufficient evidence was brought to bear in the report to pursue criminal prosecution.

Interviews of Comey and McCabe with the IG’s office have reportedly conflicted with one another, although both appear to have pursued the Trump-Russia “collusion” probe.

Questions remain as to the two’s handling of the investigation into Hillary Clinton’s private email server wherein Comey drafted a memo exonerating Clinton of criminal wrongdoing two months before interviewing her along with two witnesses to the emails sen and received over the server containing classified information.  The witnesses, Heather Samuelson and Cheryl Mills, were both close Clinton aides but served as her counsel during the July 2, 2016 interview.

Three days later, Comey gave a solo press conference in which he described a litany of misjudgments and errors Clinton made in her use of the server but maintained that “no reasonable prosecutor would bring such a case.”

In an IG report released in June 2018, Horowitz was highly critical of Comey’s conduct relating to the Clinton email case, claiming that he usurped the authority of the Justice Department by giving the presser without consulting with then-Attorney General Loretta Lynch.

Comey often tweets his opposition to Trump’s policies, public statements and actions, although on Tuesday he resolved to change direction.

At the outset of the following program, “Hannity,” host Sean Hannity immediately announced that the “Comey” report may be released “as early as tomorrow” and that it will recommend “federal prosecution” for the former FBI director.