Confront The Bully Or Be His Slave! 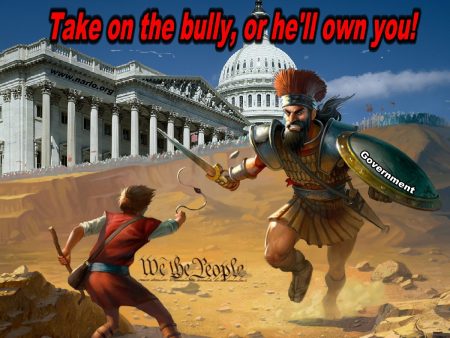 (Aug. 11, 2019) — As a rule, we aren’t prone to use biblical analogies or parables in our frequent articles and essays, although sometimes they can be useful because of everyone’s common knowledge of them ….. especially the story of David and Goliath.  We won’t go into the story except to say that Goliath, the bully, was terrorizing the common folk and had to be stopped.  The common folk had no other alternative but to confront the bully.

A commoner, David, took on the task and was triumphant with just a slingshot and a staff.  Goliath the bully, on the other hand, was not only giant in stature but was fully-equipped with armor, sword and spear and not likely to be vanquished.  This made David’s triumph over Goliath even more of a story.  In other words, in contemporary vernacular, his triumph of “good against evil” gave the story “legs” and has been carried down through the ages as a result.   Nevertheless, the non-biblical moral of the story is, of course, we must confront the bully no matter how large or how powerful he or they may be if we desire to live and remain free.

All throughout our long and tortured 5,000-year history of civilization, bullies have arisen from time to time to dominate the common folk.  Actually, there have been tens of thousands of bullies, large and small, on all continents, save one.  There seems to be an innate character in some men, and some women for that matter, that requires they control others, either as single individuals, small groups, or entire countries and cultures.  Equally, all throughout our history of civilization, we have been forced to put the bullies down, one by one, long after they have inflicted terror, cultural disruptions, property damage and grave wounds or massive deaths on the hapless and supposedly helpless population.  Unfortunately, the biggest problem we have is that we wait far too long before action is taken to relieve the bullies of their power or their lives.  We are far too tolerant of their growing power and negligently blind to their ambitions.  History has proven, the longer we wait, the tougher the job.

The power over the common people is fluid in every corner on Earth.  It is constantly on the move.  It rises and falls as the ambitions of men (and women) exercise their power by appealing to large segments of the population, that “their” way is the only right way, compelled by force of course.  Gullible, non-thinking people (there are too many in America) within the masses are highly vulnerable to powerful, charismatic speakers who project qualities of vision and leadership.  The charismatic leader has no difficulty in finding converts, and it is the converts who empower the leader seeking power.  (i.e. Al Qaeda, ISIS, Muslim Brotherhood, The Peoples Temple, Progressivism, etc.)

But bullies don’t have to come in the form of single, megalomaniac individuals like Hitler, Mussolini, Stalin, Attila the Hun, Caesar, or even the crazed Ayatollahs of Iran.  Sometimes the “bullies” come in the form of people behind a phantom ideology that is created by a ruling class and reinforced by a constituency that has embraced the ideology after major brainwashing by the ruling class.

Sometimes the ideology morphs slowly over time and becomes radicalized.  Sometimes there is a hidden agenda behind the radicalized ideology by powerful, wealthy men that provides the energy to keep the ideology alive and uses the group in power and their constituents for their own evil ends.  (Globalism)  Many times actual or perceived natural or man-made emergencies are exploited to increase power over the people by using the ideology and the emergency as their rationale.  President Wilson used the banking emergency to create the Federal Reserve and the Internal Revenue Service.  FDR used an emergency (the Great Depression) to increase government power outside of the Constitution.   Socialist Democrats are now doing the same thing with Climate Change.  The results will not be any different, and freedom will be the loser.  Once again, as history repeats itself, the masses subjugate themselves to the dictates of the bully.

This flawed ideology, the group in power, the constituents who maintain the group in power and international evil men who exploit all three for their own enrichment are what we, as free individual Americans, face today.  It is the bull in the china shop.  It is the elephant in the room.  It is the commonly-accepted ideology of Progressivism.  Progressivism or Liberalism is socialism by any other name, and it is the giant bully (Goliath) who we must vanquish should we desire to live and remain free.

Progressivism and Liberalism are the antithesis of individual freedom and liberty.  They cannot co-exist with our Constitution and a free society.  Liberalism is manifested in the ideology of collectivism, where the group, the mob, the collective, have a greater priority and greater rights than the individual.  In liberalism, the rule of the mob, the collective, states that “the needs of the many outweigh the needs of the few.“

But this bully, liberalism, is intractable.  We have allowed it to become entrenched in the very fabric of our culture.  It is concentrated in big cities that by their very nature are dependent on government.  Liberalism has been woven into our laws and regulations.  It is like a demon that must be exorcised from the “house” we live in.

The constituency that has bought into this flawed ideology is absolutely convinced that it is the “way,” the “light,” the “salvation.”  To bring them out of this liberal stupor will be a monumental task.  The saying,  “….. that a man convinced against his will, is of the same opinion still” is directly applicable to this “mountain” we must climb.  Like the followers of a Jim Jones cult, members will have to be de-programmed if they are to join the ranks of the sane.  We literally have to empty the “Little Black Box” in their brain and re-fill it with the principles of individual freedom and unalienable rights.

Liberalism or Progressivism is the “bully” that all freedom-loving people must confront and relieve of its political power and its ideological life.  In spite of what lies before us, the de-programming of liberalism that threatens our freedom is not insurmountable.  It is not the unalterable end-all to American culture and way of life.  Like all converts, they must be won over, one-by-one.

But how, you say, can we be victorious over such an insidious and powerful enemy?  A few facts may put our dilemma in perspective.  America is purported to be a center-right nation, so there have to be more of “us” than there are of “them.”   Some liberals just don’t know they are really conservatives when it comes to values, morals and individual rights.  They will be the easier converts.  The hard-core liberals will take a little more time.  It can be done peacefully if those of us of like mind will commit and take a stand for the principles of freedom and liberty, protect and defend our American Constitution and the individual rights it promises and be true to the values of family, honesty, integrity and honor.  To be effective, it must be done on a grand scale.  It cannot be a token effort, and that is what it is right now.

Here is how it can be done.  Every conservative in America agrees on just one thing to confront (one bully) at a time.

The alternative to the coalescing of all united conservatives to confront the “bully” or “bullies” is to capitulate (give in) to the bully and succumb to a civil war, armed revolution, slavery, or all three.  America is at a crossroads, a turning point.  What we do or don’t do now will determine the fate of freedom for all future generations on the entire planet, from this moment forward.  Do we not owe it to those future generations (that’s right, our own children and grandchildren), to do the right thing?  But it is inescapable that, the longer we wait, the tougher the job.

FOR GOD’S SAKE, LADIES AND GENTLEMEN, ARE WE THE AMERICANS WHO CONQUERED A CONTINENT, BROUGHT A STANDARD OF LIVING UNEQUALED TO THE MASSES, SAVED BILLIONS FROM SLAVERY AT GREAT SACRIFICE IN TWO WORLD WARS AND GONE TO THE PLANETS ON OUR ROCKET SHIPS, OR ARE WE THE BEASTS OF BURDEN AND SLAVES TO THE RULING-CLASS BULLIES?

ARE WE TO REPEAT HISTORY AGAIN AND WATCH THE ONLY VIABLE EXPERIMENT WITH FREEDOM BE RELEGATED TO SOME OLD DUSTY HISTORY BOOK AS A FAILED REMINDER THAT WE DID NOT CONFRONT THE BULLY?

ARE WE TO WALLOW IN THE CESSPOOL OF OUR OWN SUCCESSES, SELF-INDULGENCE AND IMMORAL DECADENCE, WITHOUT REGARD TO THE FACT THAT INDIVIDUAL FREEDOM IS DELICATELY FRAGILE AND SUSCEPTIBLE TO THE SLIGHTEST DISTRACTION?

TO REFUSE TO CONFRONT THE “BULLY” IS TO CONDEMN ONESELF TO PERPETUAL SERVITUDE.  ARE YOU SATISFIED TO BE A GOVERNMENT SERVANT, OR ARE YOU DETERMINED TO BE THE MASTER?  WE’LL KNOW SOON, PROBABLY BY NOVEMBER OF 2020!

If you let the bully win, you will be forever stuck with the outcome.  Right now, the bully is winning.