Ohr acted as a conduit of information from former British intelligence agent Christopher Steele, who compiled the now-infamous Trump-Russia “dossier,” to the FBI and several DOJ prosecutors.

Although Page was described in the FBI’s affidavit as “an agent of a foreign power” necessitating government surveillance, he was never charged with any wrongdoing.  In fact, in recent interviews, Page claimed he has been an FBI and State Department source “for decades.”

“A former Trump campaign official, possibly Rick Wilson, was talking about some of the Trump ties to Russia and the Trump Campaign tried to sue him for violating his non-disclosure agreement,” reads the second paragraph on the report, which is dated “12/12/2016.” 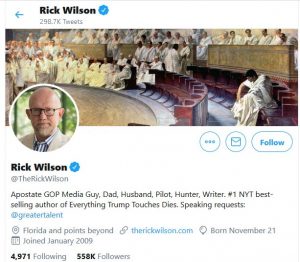 Wilson, a Republican strategist who vehemently dislikes Donald Trump and never worked on the former businessman’s upstart campaign which caused the FBI and other government agencies to participate in a “conspiracy” to derail the possibility that he would be elected president, according to congressional investigators and investigative journalist John Solomon.

The claim of improper Trump-Russia connections was disproved by a 22-month Special Counsel investigation which concluded in March.

Wilson’s Wikipedia page states, and public reporting supports, that he has been an outspoken critic of Trump since the 2016 campaign.  He is author of “Everything Trump Touches Dies” and boasts being a prominent voice in the “NeverTrump” movement.

In Everything Trump Touches Dies, political campaign strategist and commentator Rick Wilson brings his darkly funny humor and biting analysis to the absurdity of American politics in the age of Trump. Wilson mercilessly exposes the damage Trump has done to the country, to the Republican Party he served for decades, and to the conservative movement that has abandoned its principles for the worst President in American history.

No left-winger, Wilson is a lifelong conservative who delivers his withering critique of Trump from the right. A leader of the Never Trump movement, he warns his own party of the political catastrophe that leaves everyone involved with Trump with reputations destroyed and lives in tatters.

Last August, Bruce Ohr testified to members of the House Judiciary and Oversight & Government Reform Committees about his communications with Steele, as well as the work his wife Nellie performed for Fusion GPS, which contracted Steele to assemble the dossier on behalf of the DNC and Hillary Clinton campaign.

Nellie Ohr has been referred to the Justice Department for possible criminal prosecution.  In her testimony to members of Congress last October, she often invoked “spousal privilege” in responding to congressional investigators’ questions.