“MALFEASANCE” AIMED AT “TAKING OUT A PRESIDENT” 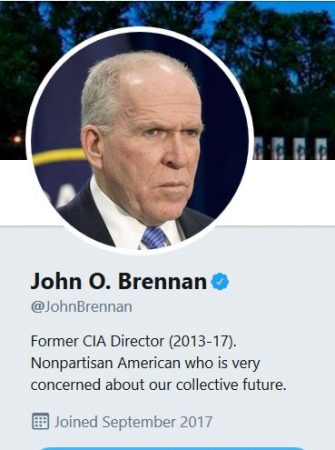 (Jun. 25, 2019) — On Monday night’s edition of “Hannity,” investigative journalist Sara A. Carter said she believes documentation yet to be released to the public will show that not only were foreign intelligence services involved in surveilling the Trump campaign in 2016, but also that then-CIA Director John Brennan was “well aware” of those activities.

Earlier, Hannity said to Carter, Fox News Legal Analyst Gregg Jarrett and former independent counsel Kenneth Starr that there are “six buckets” of classified information to be made public through declassification.

In addition to the U.S. intelligence community’s “malfeasance,” Carter said, “We know there were foreign actors involved, and when foreign actors and foreign states are involved, that means those intelligence services, both in Italy and Great Britain — that John Brennan was well aware of what was going on.”

Carter made the comment in the context of the investigation launched by Attorney General William Barr, tasked to U.S. Attorney John Durham, to discover the origins of the Trump-Russia “collusion” probe which concluded that no “collusion” between the campaign and the Kremlin took place.

Former Trump campaign adviser George Papadopoulos, who accepted a plea deal for lying to the FBI in 2017, has contended on Twitter for months that the intelligence apparatuses of the UK, Australia, Italy and Ukraine were involved in an effort to glean inside information from the campaign and diminish Trump’s chance of winning the presidency.

When it was Jarrett’s turn to speak, he raised the issue of “exculpatory evidence” relative to Papadopoulos and Carter Page, also discussed by former Rep. Trey Gowdy on “Sunday Morning Futures” on June 23.  Page was the subject of government surveillance for nearly a year, unbeknownst to him, with the claim that he was an “agent of a foreign power.”  He was never charged with a crime and has since revealed that “for decades,” he is been an intelligence source for the FBI and the US State Department.

Papadopoulos has stated on Twitter over a period of months that he believed he was being recorded when he spoke with then-Australian ambassador to the UK Alexander Downer in May 2016.  Further, he has recently claimed that there are multiple transcripts of his conversations with shadowy figures who approached him in Europe after it became public that he was an informal Trump campaign adviser.

“I think you’ll find that there is a transcript” of Papadopoulos’s conversation with Cambridge University Prof. Emeritus Stefan Halper, Jarrett said.  Halper is now known to have been a U.S. intelligence community asset when he approached Papadopoulos and Page with various overtures.

The “exculpatory evidence” was never presented to Papadopoulos’s attorneys during the plea-agreement negotiations nor to the court, according to Papadopoulos’s book, “Deep State Target,” as well as numerous interviews he has provided since completing his 12-day prison term in early December.

Jarrett said that the failure of the FBI and Justice Department to present the exculpatory evidence to obtain the FISA warrants on Carter Page is “a lie and a fraud on the court.”  He accused former FBI Director James Comey, former Deputy Attorney General Sally Yates, and former FBI Deputy Director Andrew McCabe of “lying to the FISA court.”

Starr described the withholding of the evidence as “unforgivable” and “unpardonable.”  That is “unethical,” he said, and “it may be criminal.”

Since becoming a national-security commentator at MSNBC in 2017, Brennan has accused Trump of “treason” and “incompetence,” among other things, and claims Trump should be removed from office.  On his Twitter profile, he claims to be a “Nonpartisan American who is very concerned about our collective future.”

Sara Carter ended the segment by stating, “The reason they did that,” meaning the withholding of exculpatory evidence, “was to take out a president.”