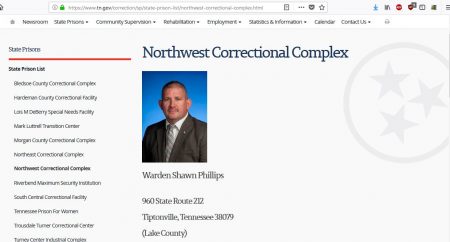 (Aug. 7, 2019) — A letter received Tuesday from an inmate at the Northwest Correctional Complex (NWCX) in Tiptonville, TN focuses on what he believes to be deceptive practices within the prison’s educational program.

The inmate had recently written to us to report what he said is the “militarization” of the facility through the use of a “Strike Force.”

“A major topic of national discussion is prison reform and reentry,” the inmate wrote. “A huge part of this topic has to do with educational/vocational programs being provided for inmates to increase the likelihood of getting a decent job to make a living to hopefully stay out of trouble upon release. But in order for programs to be effective, the programs cannot be a sham operation like the one here at NWCX.”

As was reported by former NWCX inmate Walter Francis Fitzpatrick, III and current inmate Jerome L. Johnson, the writer reported that federal monies flow into the prison system “based on student attendance.” He then alleged that “The Principal, Ronnie Lanier, is instructing his teachers to cook the books when it comes to attendance, so the money keeps on rolling in. They make it seem on paper the inmates assigned to the school are actually attending. Textbooks and materials are being bought, but students are not seeing them. Where are these materials going? The library has not seen a new book purchased in several years…”

Fitzpatrick, Johnson and another Tennessee inmate not at Northwest, Grenda Ray Harmer, all reported that they were placed in the Pro-Social Life Skills (PSLS) class despite their ineligibility for various reasons. Fitzpatrick reported he was threatened with bodily harm were he to fail to report, while Johnson received a “Class ‘A'” disciplinary write-up.

The inmate additionally alleged that the facility “inflates the attendance records.” “As I’ve mentioned before, gangs run the school units and inflict undue amounts of violence both physical, verbal, and extortive on other inmates who are vulnerable,” he continued on page 2, with an account of how a student inmate had received a care package of clothing only to have it stolen by gang members while he attended class. “When he went to the Unit Manager, Scott Spillers, he was told that he would have to ‘join a gang’ or just ‘be a man and tough it out’ and not to return to him with these types of complaints,” the inmate alleged.

Over more than four years, The Post & Email has published a myriad of letters from NWCX inmates describing an out-of-control environment in which gang members run the prison, orchestrate attacks on inmates they dislike with impunity, and even allegedly coordinate their activity with prison staff.

Further, the writer, who describes himself as “white,” wrote that “African-American and Latino students are being disproportionately written-up and fined for not showing up, while white students get a pass. I believe in fairness and equality. This is clearly not fair. This is the definition of a money racket.”

Despite Tennessee’s new governor, Bill Lee, having campaigned on a platform of prison reform, the inmate wrote that “The tax payers of Tennessee and the federal government would scream foul if they knew HOW their tax dollars earmarked for inmate educational/vocational programs are being used. Students here at NWCX are finishing last, not because they don’t have the will of the intellect, but because the system is failing the miserably while simultaneously telling their families and the public-at-large that they are returning to them, and society, a man they have helped and rehabilitated.” [sic]

He punctuated the paragraph by stating, “This is a disgusting trend.” 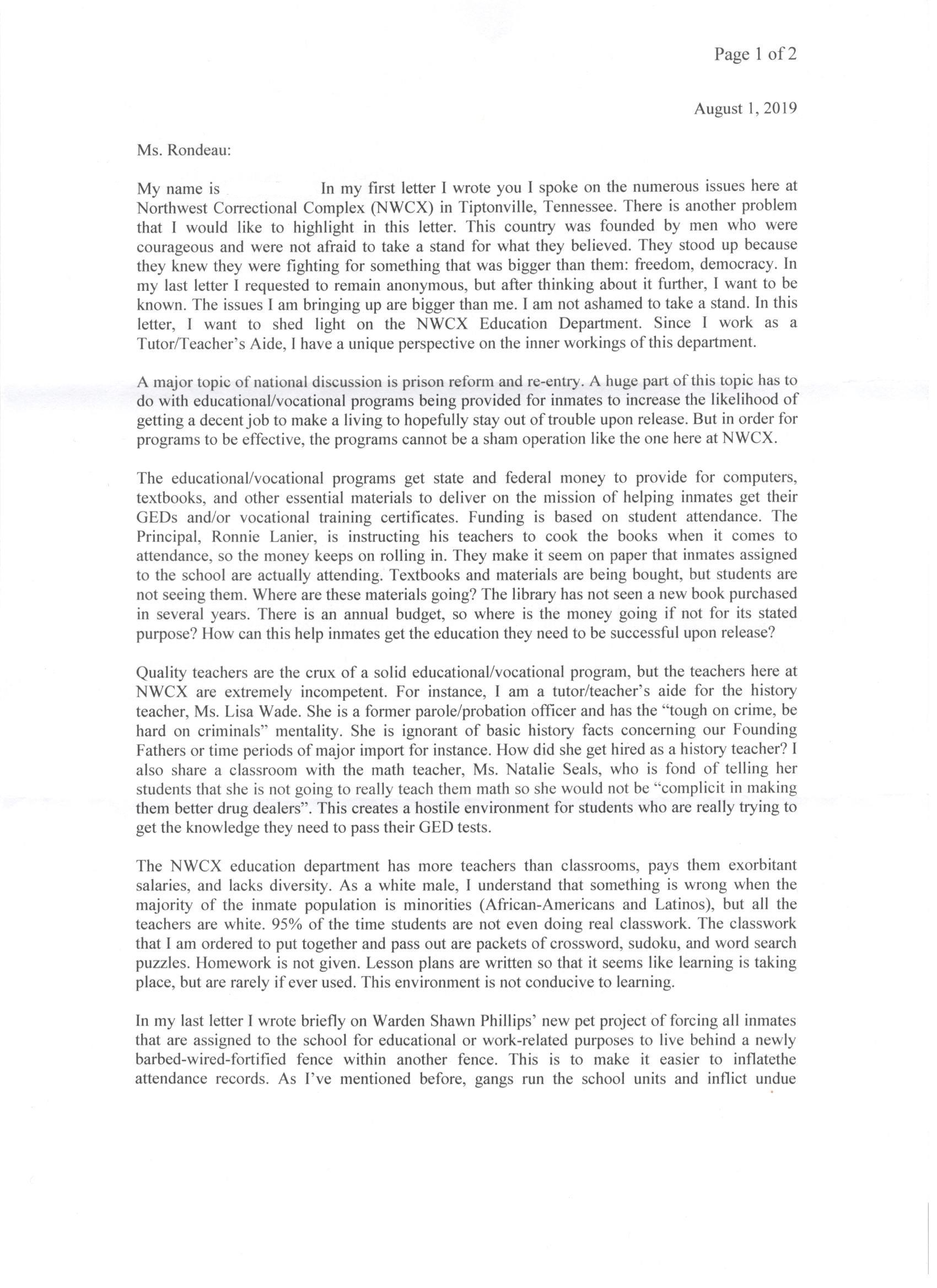 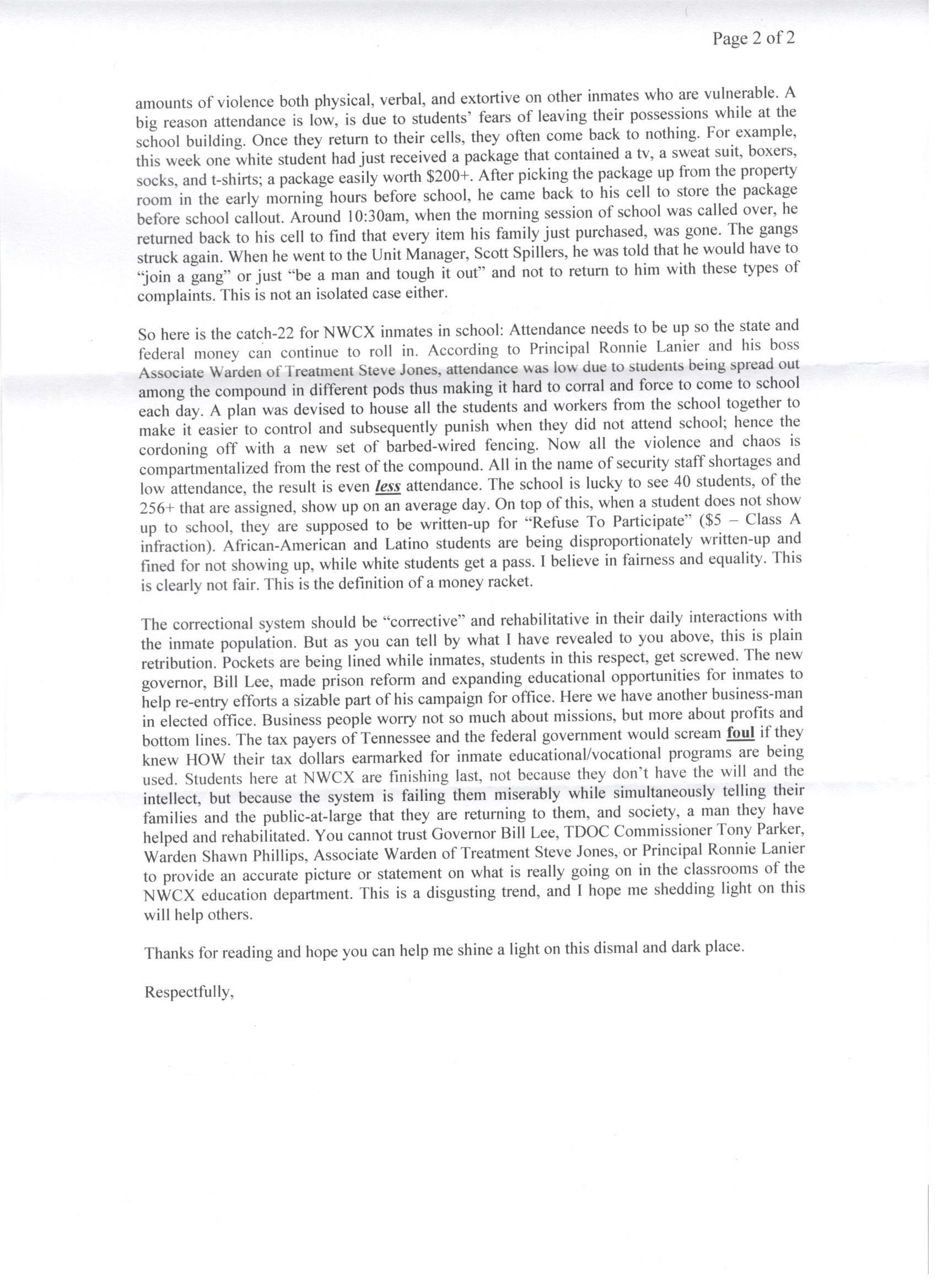