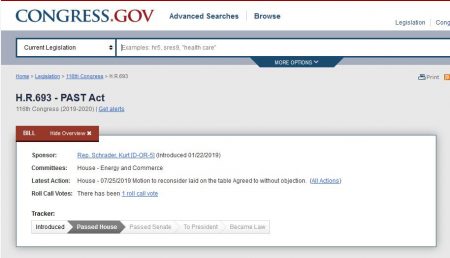 The roll call reflects 333 yeas, 96 nays, and one abstention.

The bill is aimed at strengthening the 1970 Horse Protection Act (HPA).  The new measure is formally known as the “U.S. Senator Joseph D. Tydings Memorial Prevent All Soring Tactics Act of 2019.”

At the end of May, The Post & Email reported that the number of cosponsors had surpassed 300.

“Soring” is the practice of sensitizing a horse’s lower front legs by rubbing mustard oil, kerosene or diesel fuel on the skin, then wrapping them so that the chemicals will soak in overnight.  Eight-pound shoes known as “stacks” are attached to the horse’s front hooves, often accompanied by objects inserted in the underside of the hooves to cause pain such that the animal will lift its feet higher than normal with a prancing gait.

Chains are placed on the horse’s pasterns which further aggravate the sensitization of the horse as it moves.

Many judges, and therefore, owners trainers, covet the artificial movements which Seay’s organization and others term the “Big Lick.”

Since passage of the HPA, scores of horse owners and trainers have been fined once soring, or its concomitant scarring, has been identified by a USDA-authorized inspector at a horse show.  However, according to Seay and other horse-welfare advocates, the practice has continued, mainly in the American Southeast.

Excerpts from the House floor debate can be viewed here, during which Rep. Kurt Schrader (D-OR5), a veterinarian and the bill’s original sponsor, described soring as “incredibly abusive.”

Rep. Buddy Carter (R-GA1) said that the bill “takes a step forward” to “make soring a thing of the past.”

Seay weighed in on the bill’s House passage on his YouTube channel Saturday.

In the Senate, Sens. Marsha Blackburn and Lamar Alexander have introduced a companion bill, S1455, to “protect the Tennessee Walking Horse tradition” while contending that there should be “zero tolerance” for those who engage in soring.

Congress will be out of session during the month of August.