(Jul. 15, 2019) — Several weeks ago, a former U.S. Marine and current Rutherford County, TN Detention Center inmate contacted The Post & Email to expound on what he said is corruption within the county grand jury on several fronts leading to false charges in his case and possibly many others.

The jail is located in Murfreesboro, in the same complex as the Sheriff’s Office, currently led by Mike Fitzhugh.

The mailing consists of more than 40 pages and because of its size, is not wholly reproducible here. The Post & Email will therefore present the documentation in a series of articles.

Some of the documents are copies of indictments of other Rutherford County residents which the inmate said show hastiness in the grand jury’s deliberations based on the number of cases it reviewed while empaneled.

On a cover sheet containing his contact information, James Michael Parker, #0002075, indicated that he read one of our articles and “filed complaint w/ Dept. of Justice!” The Post & Email has published hundreds and likely thousands of articles about grand jury corruption in Tennessee over the last 9+ years, and Parker did not identify which article he read.

In a two-page cover letter, Parker wrote that he suffers from PTSD, which caused him to be “pushed out of service in late 2012.” “I had been diagnosed with post traumatic stress disorder, severe depression, and suicidal ideology,” he wrote on page 1. “I still struggle even to this day. (my current situation does not in any way make it easier)”. [sic]

“I write this not because of just me, but for the other thousands of US service members being maliciously prosecuted and tucked away from society, our families, our lives because its easier to hide us than to help those of us who need help and understanding.” [sic] he continued his letter.

On page 2, Parker referenced the “Veteran Court” employed by Rutherford County and other jurisdictions for qualifying individuals, known locally as the “Veterans Treatment Court.” He claimed, however, that the institution “will only help with alcohol and drug offenders who just want leniency for their addiction. There is no real help. There is no liaison between the courts or judicial system and veterans with mental health issues.”

A lengthier enclosure is a copy of the letter Parker presumably sent to the U.S. Justice Department in which he asked for an investigation into why the Rutherford County grand jury foreman, Karen Hudson, has been serving in that capacity for “18 plus years” and “signing indictments.”

The practice Parker identified is one of which The Post & Email became aware in late 2009 after then-Monroe County, TN resident Walter Francis Fitzpatrick, III discovered that the grand jury foreman, Gary Pettway, had been serving in that role for more than 20 years and was “handpicked” by the criminal court judge.

Similar reports have been made by individuals residing in Shelby County, McMinn County, and Roane County. In 2013, headlines in various papers throughout the country were made after it was discovered that the Davidson County, TN grand jury foreman, Eugene Grayer, was himself a convicted felon and statutorily barred from serving on a jury in the state of Tennessee.

Grayer’s selection as foreman was personally made by the judge, as was his successor, Stan Fossick, as reported by The Tennessean.

On the fourth page of the letter, Parker described Rutherford County as “the definition of mass government corruption. The courthouse is the clear definition of ‘kangaroo court.’ They have no respect for peoples constitutional rights, or the Tennessee Supreme Court rules.” [sic]

In the last paragraph on that page, Parker referred to a sheriff who was “charged with racketeering, extortion, bribery and criminal enterprise.”

On May 27, 2016, WSMV in Nashville reported that “Rutherford County Sheriff Robert Arnold, his former administrative chief deputy Joe Russell and the sheriff’s uncle have been arrested on conspiracy and corruption charges.”

On November 19, 2015, Channel 5 quoted Arnold as having decried “the county’s private, for-profit probation system” which he said caused an overcrowding problem in the jail.  The court-ordered jailing of persons charged with “misdemeanor probation violations” necessitated three inmates to a cell designed for one person, Arnold said.

Some individuals were jailed for failing to pay fees to the private probation company, PCC, Channel 5 reported, referencing a “federal lawsuit.”  Six weeks prior to Channel 5’s report and tour of the jail, The New York Times announced a suit filed by “seven probationers, many of them sick or disabled and living on as little as $129 a month in food stamps” claiming the company violated federal racketeering statutes.

Arnold entered a “guilty” plea to wire fraud and extortion, Channel 5 wrote in February, and was sent to a federal prison in Montgomery, AL.  Last year he reportedly unsuccessfully petitioned President Trump for “a full and unconditional pardon.”

Parker’s letter to the Justice Department cites corruption within the district attorney’s office. “Included in this letter are indictments from 2001 to 2019,” Parker wrote on page 1. “If you look at the signature of the foreperson, you will see the signature of Karen Hudson. She has been the grand jury foreperson for over 18 years…”

On the following page, Parker wrote, “Rutherford County has found a way to generate revenue by obtaining unlawful indictments. Karen Hudson’s job for either the city or the county is their media consultant. She is clearly not a qualified jury foreperson due to her attachment to the city/county. By her being a voting member of the grand jury and presence during deliberation, clearly violates my constitutional rights to an impartial jury, whether petit or grand jury…”

“This issue is effecting hundreds of people here in the jail waiting for trial not to mention the hundreds out on bond,” Parker’s letter concludes. “Thousands upon thousands effected in the almost 20 years Rutherford County has made it a cash cow business of maliciously prosecuting people. Maybe the Attorney General and the Dept. of Justice can look into and correct these issues, since I’m denied the right to even ask why.” [sic] 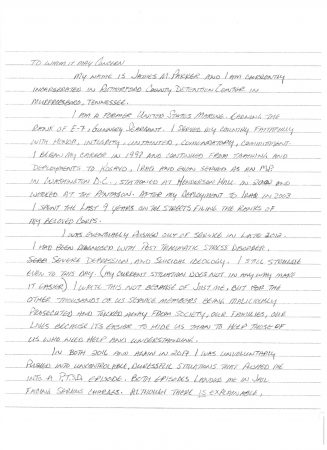 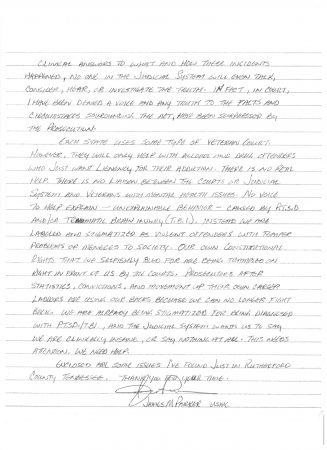 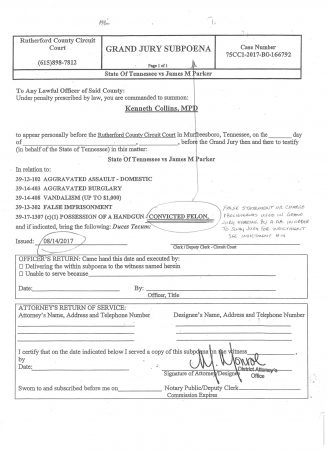 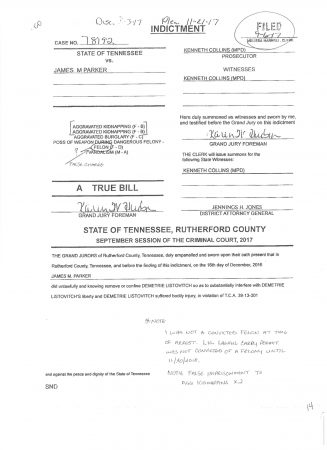 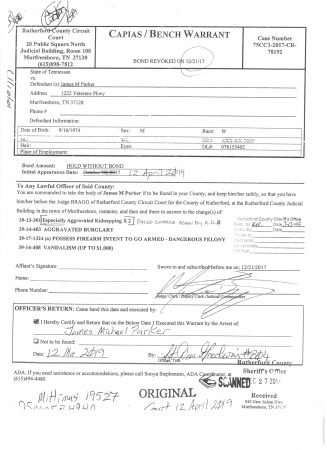 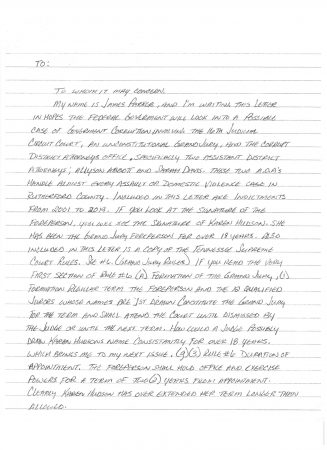 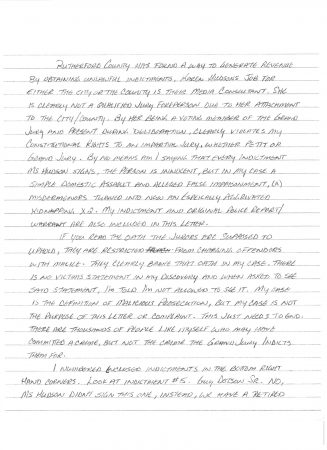 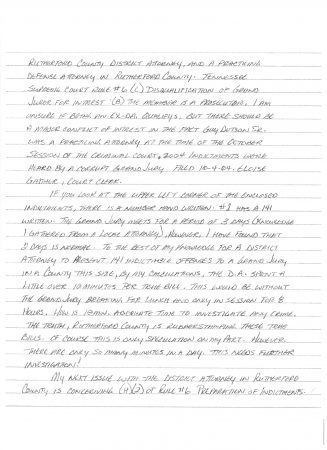 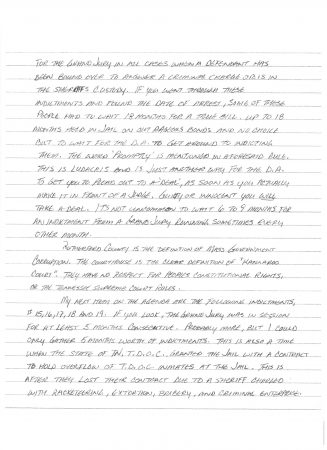 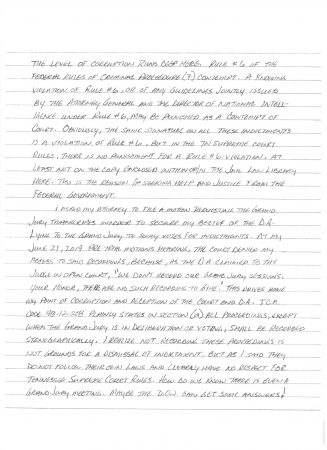 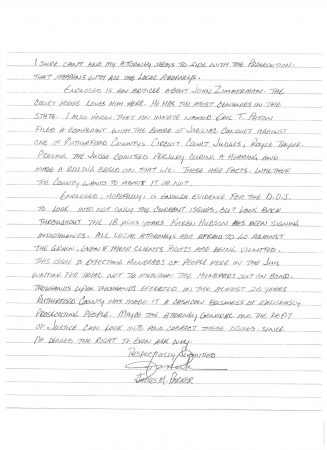