(Jun. 15, 2019) — In a tweet at approximately midnight Friday, former Trump campaign adviser George Papadopoulos said that an alleged “transcript” of his May 2016 conversation with then-Australian Ambassador to the UK Alexander Downer will prove that “Australia was willfully trying to sabotage Donald Trump” during the 2016 presidential election cycle.

At the time of his meeting with Downer, Trump had just defeated the remaining candidates in the Republican presidential primaries, therefore becoming the presumptive party nominee.

In closed-door testimony last fall as well as in his book, “Deep State Target,” Papadopoulos described at least nine approaches made to him by unknown individuals after he was announced as a Trump-campaign informal foreign-policy adviser in March 2016.  In a tweet on Thursday, Papadopoulos said those individuals hailed from the U.S. Defense Intelligence Agency, the CIA and the British intelligence service, MI6.

Nearly two years ago, Papadopoulos accepted a “guilty” plea for allegedly lying to the FBI about the timing of his contacts with a mysterious figure, Joseph Mifsud, who the “Mueller report” claimed has ties to Russia. In recent interviews, however, Rep. Devin Nunes, ranking member of the House Intelligence Committee and former chairman, has suggested that growing evidence indicates Mifsud has ties to Western intelligence.

The “Mueller report” was generated at the conclusion of a 22-month probe conducted by former FBI Director Robert Mueller following the termination of FBI Director James Comey on May 9, 2017. Mueller’s investigation drew on material the FBI had allegedly gathered in its probe into whether or not anyone within the Trump campaign had “colluded” or “conspired” with Russians to affect the outcome of the election.

Despite a team of 19 left-leaning prosecutors, some of whom had visibly supported and defended Democrats such as Hillary Clinton and Obama deputy national security adviser Ben Rhodes, Mueller concluded that “no American” collaborated with the Kremlin to gain an election advantage.

In previous tweets and statements, Papadopoulos has claimed that Mifsud’s attorney said his client was working for the FBI when he approached Papadopoulos in April 2016 to tell him that the Russians had “dirt” on Hillary Clinton.

“Have been contacted by about a dozen Australian journalists for comment on Clinton errand boy, Alexander Downer, and him being idiotic enough to spy on me with his phone,” Papadopoulos tweeted late Friday/early Saturday morning.  “The transcript of my meeting with him will show Australia was willfully trying to sabotage Donald Trump.”

In 2006, Downer arranged for a $25 million donation to the Clinton Foundation on the part of the Australian government.

In his book and a number of high-profile interviews over the last several months, Papadopoulos has claimed that during his “hostile” exchange with Downer at the Kensington Wine Rooms that evening, Downer visibly held up his phone as if to indicate he were recording the conversation.  During his closed-door deposition with members of the House Judiciary and Oversight & Government Reform Committees last fall, at least one congressman suggested that “transcripts” of Papadopoulos’s 2016 meetings with various individuals in Europe exist (pp. 29, 30 in transcript). 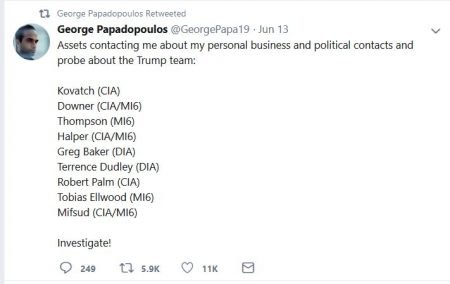 Papadopoulos has also claimed that he reported his interaction with Downer to the FBI.

Rep. Nunes, Mark Meadows, Jim Jordan and former Rep. Trey Gowdy have recently suggested that classified and non-classified documents which may be released in the near future will demonstrate that the U.S. intelligence community was conducting undercover surveillance of the Trump campaign through foreign intelligence services.  Nunes, in particular, suggested late last month that UK intelligence was aware of the Russia “dossier” compiled by former MI6 agent Christopher Steele used to procure four successive FISA warrants on former Trump advisor Carter Page.

Mifsud was noted by Special Counsel Robert Mueller to have “connections to Russia” (p. 5). In a letter sent in early May to the heads of the CIA, FBI, State Department and NSA, Nunes wrote, according to Fox News, “If Mifsud has extensive, suspicious contacts among Russian officials as portrayed in the special counsel’s report, then an incredibly wide range of Western institutions and individuals may have been compromised by him, including our own State Department.”

Mifsud’s claim to Papadopoulos about Clinton’s emails arguably served as the catalyst for the FBI’s counterintelligence investigation into the Trump campaign, as the narrative thus far states that Papadopoulos then communicated a similar message to Downer, prompting Downer to contact the FBI in the UK.

The FBI claims that it opened its investigation into the Trump campaign on July 31, 2016, nearly three months after Papadopoulos and Downer spoke in London; however, Nunes believes it started as early as “late 2015.”

On December 30, 2017, The New York Times reported that it was Papadopoulos’s conversation with Downer about “political dirt” which prompted “Crossfire Hurricane,” the code name for the FBI’s unprecedented counterintelligence probe into a presidential campaign.

The Mueller report states that Mifsud was interviewed in Washington, DC on February 10, 2017 and denied sharing such information with Papadopoulos. The report states that Mifsud provided “inaccurate” statements to investigators, although he was not prosecuted.  In contrast, the report contends that Papadopoulos’s statements were “false” and contained “omissions” crucial to “investigators’ ability to challenge Mifsud when he made these inaccurate statements” (p. 193). 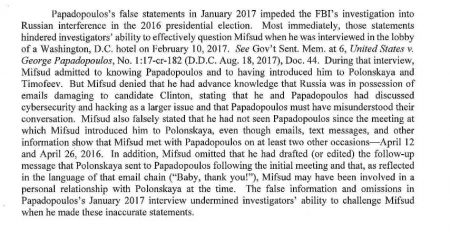 According to Papadopoulos, Mifsud has received protection from the Italian government for approximately two years until very recently. Papadopoulos has tweeted that he believes Australia, Ukraine, Italy, and the UK were all involved in a plot to thwart Trump’s chances of becoming president and that Trump is now fully aware of their respective roles.

On Friday Papadopoulos tweeted, “When I reported Australian Clinton errand boy, Alexander Downer, to the FBI/Mueller/Congress I didn’t know he was working with the US Intel agencies to set Trump and his team up with a fake story and recording convos. Australia is trying to guard the transcripts.  Squeeze them!”