“WE’RE GETTING A LOT OF WHISTLEBLOWERS” 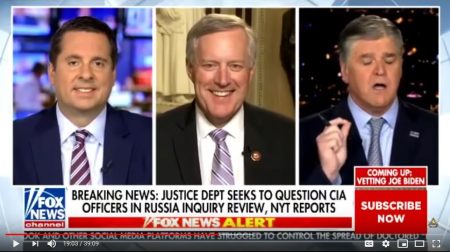 (Jun. 13, 2019) — On Wednesday night, Reps. Mark Meadows and Devin Nunes were Sean Hannity’s guests following a public hearing of the House Intelligence Committee that morning in response to the release of the “Mueller report” in April.

The committee’s ranking member and former chairman, Nunes asked several pointed questions of the three witnesses at the hearing, including whether or not they had read the Russia “dossier” compiled by British citizen and then-FBI source Christopher Steele circulated within the federal government and leaked to the media in 2016.

The dossier helped to spur the FBI’s counterintelligence probe into the Trump campaign, which appears to have included overseas intelligence services, Hannity has reported over a number of weeks.

To Hannity, Nunes expressed concern that two of the witnesses, both “retired FBI agents,” did not appear to object to the FBI’s having opened a counterintelligence probe into a political campaign in 2016.  In May 2017, the investigation was turned over to Special Counsel Robert Mueller, who hired 19 prosecutors and utilized approximately 40 FBI agents to determine whether or not anyone in the Trump campaign had conspired with Russia to win the election.

Neither former FBI official had read the dossier, they responded to Nunes’s query.  The third witness, former Assistant U.S. Attorney for the Southern District of New York Andrew McCarthy, said he had read it.

After 22 months and $35 million spent, Mueller’s team found no evidence of “collusion” or “conspiracy” with Russia on the part of the campaign or “any American,” the report states (p. 189).

Through Hannity’s reporting and that of investigative reporters Sara A. Carter and John Solomon over many months, it has become clear that the unverified “dossier” was a major source of “evidence” submitted to the Foreign Intelligence Surveillance Court (FISC) to obtain surveillance warrants on former Trump campaign advisor Carter Page.

In its application to the court, the FBI, under the signature of then-Director James B. Comey, alleged that Page was “an agent of a foreign power,” namely, Russia. He was ultimately never charged with a crime and recently divulged that he has been a source of intelligence for the State Department and CIA for “decades.”

Nunes, Meadows, Rep. Jim Jordan and Rep. John Ratcliffe, all Republicans, have acted as investigators and questioners of current and former FBI/DOJ officials involved in the probe in its early stages.  Their exchanges with DOJ official Bruce Ohr, former FBI Deputy Director Andrew McCabe, and former Attorney General Loretta Lynch, among others, are noted in transcripts released over the last two months by Rep. Doug Collins (R-GA4).

In the past, Nunes said he suspects the FBI’s counterintelligence operation began much earlier than the July 31, 2016 date the FBI has provided.

Meadows, who is not a member of the Intelligence Committee but serves on the Judiciary Committee, said that Democrats “didn’t get the result they wanted” from the Mueller report, hence Wednesday’s open hearing. However, he said, “They know the truth.”  He then remarked that the two former FBI executive assistant directors “hadn’t even read the Steele dossier; that’s how ‘credible’ that was.”

At 19:01, Hannity asked both congressmen if he was “over the top” by suggesting that the intelligence services of Italy, the UK and Australia were involved in information-gathering on the Trump campaign.

Nunes responded indirectly with, “We don’t know who Joseph Mifsud was working for.”  In April 2016, Mifsud, a professor with ties to London and Rome, reportedly approached then-Trump-campaign adviser George Papadopoulos to say that the “Russians” had “dirt” on Hillary Clinton.

Approximately ten days later, Papadopoulos was asked to meet with then-Australian Ambassador to the UK Alexander Downer, during which time Downer reportedly held up his phone as if he were recording the conversation. In the coming months, Downer was to claim to the FBI that Papadopoulos told him the Russians had “Hillary Clinton’s emails.”

Papadopoulos wrote in his book, “Deep State Target,” that he does not recall having mentioned “emails” during the contentious exchange with Downer that evening at the Kensington Wine Rooms in London. Wednesday evening on Twitter, Papadopoulos predicted that in the near future, a “transcript” of his conversation with Downer will be released and that the “governments” of Australia and New Zealand “were willfully interfering in our democratic process.”

On December 30, 2017, The New York Times reported that it was the Papadopoulos-Downer conversation which proved to be the catalyst of the FBI’s counterintelligence operation into the Trump campaign.

Mifsud denied having imparted the information to Papadopoulos.  While Mifsud was not charged with a crime, Papadopoulos was, for which he accepted a “guilty” plea in October 2017.

The Mueller report frequently cites The Washington Post and The New York Times as sources in its footnotes rather than the results of its own investigation.

The report claims Mifsud was a Russian asset, although Nunes has suggested, as he did again on Wednesday night, that Mifsud is a Western intelligence figure.  He also said Mifsud might have been working for Fusion GPS, the company which hired Steele to gather the opposition research on Trump which became the “dossier,” or a similar organization.

Fusion was paid to obtain opposition research on Trump by the DNC and Clinton campaign indirectly through the Perkins Coie law firm.

Nunes said that at some point, the FBI and Fusion GPS “merged” their efforts and that he wants to know when that occurred and “what countries were involved in this.”

Last month, Barr announced the appointment of U.S. Attorney for the District of Connecticut John Durham to conduct an investigation into the origins of the Trump-Russia “collusion” probe. A letter from Assistant Attorney General Stephen E. Boyd to House Judiciary Committee Chairman Jerrold Nadler on Monday divulged that Durham’s assignment will place him in Washington, DC along with necessary staff during the probe.

At 20:13, Meadows said, “We’re getting a lot of whistleblowers. Primarily the whistleblowers are coming forward because they believe Attorney General Bill Barr and John Durham are willing to get to the bottom of it.  So people that perhaps were afraid under previous leadership to actually say, ‘Well, we knew this was wrong,’ they’re coming forward now.” [sic]

Meadows added that “the FBI knew” that the dossier was “shopped” to the media by longtime Clinton ally Sidney Blumenthal “and the FBI knew it.”  On Tuesday night, Hannity’s first guest was Judicial Watch President Tom Fitton, who said that recently-released emails show that Steele had ready access to the U.S. State Department, which he used to circulate his unverified information on Trump and Russia.

“That’s the problem; the FBI knew it prior to that first FISA, and here they are using it as credible information for a FISA application,” Meadows said.  “I just think that that’s totally wrong.”