Papadopoulos: First Declassified Documents to be Released This Week

“THE UK WAS WILLFULLY COMPLICIT” 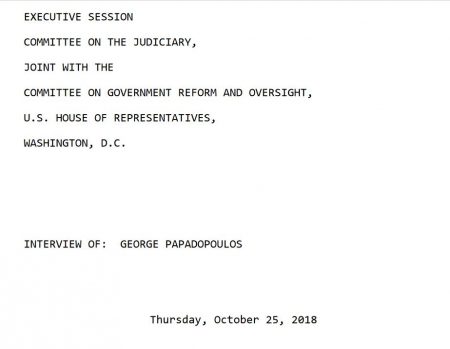 (Jun. 3, 2019) — On Monday morning, former Trump informal advisor George Papadopoulos predicted that the first in what is expected to be a number of document releases associated with the “Russia collusion” investigation will be released this week.

On May 23, President Trump announced he had delegated the authority to declassify the materials following a review by Attorney General William Barr with each relevant agency.

During testimony to the Senate Judiciary Committee on May 1, Barr told Chairman Lindsay Graham that he had “concerns” about surveillance and other activities which might have taken place in 2016 against a political campaign. During testimony to a Senate subcommittee in early April, Barr shocked many in Washington when he averred that “spying did occur” against the Trump campaign, although with the caveat that “spying” is acceptable if properly “predicated.”

Emerging evidence from transcripts of congressional interviews conducted in 2017 and 2018 demonstrates that Papadopoulos, former Trump campaign advisor Carter Page, Lt. Gen. Michael Flynn (Ret), and former Trump campaign manager Paul Manafort were under surveillance by the U.S. intelligence community and perhaps other intelligence services in what came to be known as “Crossfire Hurricane,” a counterintelligence operation into the campaign launched by the FBI.

Over the last several months, Papadopoulos has appeared in interviews with Dan Bongino, Sean Hannity, Laura Ingraham, Mark Steyn, and Rush Limbaugh. He will be Ann Vandersteele‘s guest Monday evening on her show, “Steel Truth.”

The 31-year-old is author of “Deep State Target: How I Got Caught in the Crosshairs of the Plot to Bring Down President Trump,” published in March.  Papadopoulos has claimed that while working in Europe in the energy-consulting business beginning in 2015, he was “targeted” by the Obama regime and at various times in 2016, “recorded” during conversations with a number of individuals associated with friendly foreign governments, including the UK, Australia, and Italy.

On December 30, 2017, The New York Times reported that it was that exchange which initiated Crossfire, although several members of Congress have since said it actually began much earlier.  In his book and during his October 2018 closed-door testimony to members of the House Judiciary and Oversight Committees, Papadopoulos said he does not recall mentioning “emails” during a meeting with then-Australian Ambassador to the UK Alexander Downer (p. 82 in transcript).

In the fall of 2017, Papadopoulos accepted a “guilty” plea with the Justice Department for allegedly lying to FBI agents during an interview conducted in Chicago at the agents’ request and without legal representation. In his book, Papadopoulos claimed he did not have his datebook with him while he answered agents’ questions as to when he met with Maltese Professor Joseph Mifsud.  On April 26, 2016, Papadopoulos wrote in his book, Mifsud told him that unnamed Russians had “thousands of Hillary Clinton’s emails” (Location 2580 of 2942 in Kindle version).

Downer claimed that during the May 10, 2016 meeting with Papadopoulos in London that Papadopoulos had repeated the information to him.

Approximately an hour after his tweet about the document release, in response to a tweet leading to an article at The Telegraph, Papadopoulos tweeted, “My testimony against Alexander Downer in Congress, and Bob Mueller’s own prosecutors telling me Downer was recording me, has unleashed an unprecedented investigation into the origins of the witch-hunt. The UK was willfully complicit. I was heavily involved in meeting their reps.”

Trump is currently on a state visit to the UK, where he was greeted by Queen Elizabeth and Prince Charles.  He is expected to speak with outgoing Prime Minister Theresa May during the visit, which will include a commemoration of the 75th anniversary of D-Day.

Papadopoulos: First Declassified Documents to be Released This Week added on Monday, June 3, 2019