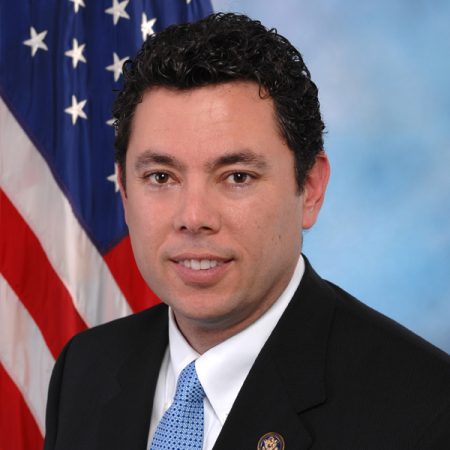 (May 15, 2019) — On Wednesday’s “Hannity,” former Rep. Jason Chaffetz, now a Fox News contributor, rhetorically asked why directors of the U.S. Intelligence Community (IC) involved in circulating the unverified Trump-Russia “dossier” in 2016 used the intelligence apparatus of foreign countries purportedly to carry out surveillance activity on the Trump campaign.

For months as well as in his book, published in late March, former Trump campaign adviser George Papadopoulos has claimed that former CIA Director John Brennan, former FBI Director James Comey, and Director of National Intelligence James Clapper participated in a scheme to infiltrate the campaign by deploying at least a half-dozen individuals to either gather information or disseminate it to him in a series of bizarre encounters, some of which Papadopoulos says Congress “knows” were recorded.

Papdopoulous did not come up in the brief interview, which included Fox News Legal Analyst Gregg Jarrett just after Hannity’s “opening monologue” (18:35 in YouTube video below).

Chaffetz asked why the “IC” “did a lot of this overseas?”  Answering his own question, he said that foreign governments are not restrained by U.S. “constitutional restraints” which prohibit surveillance on American citizens without a warrant supported by “verified” evidence.

On Wednesday evening Papadopoulos tweeted that a Maltese professor, Joseph Mifsud, said to be a “Russian agent” in Special Counsel Mueller’s report on Trump-Russia “collusion,” is actually “an FBI asset.” 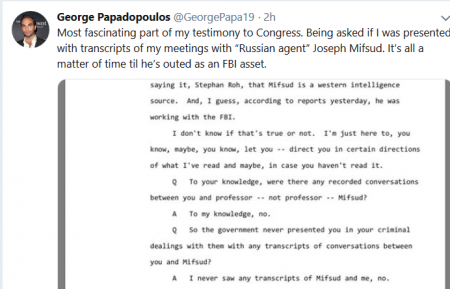 Papadopoulos has said that the governments of Italy, Australia, and the UK participated in the 2016 effort to see that Trump was not elected president.  Italy, Papadopoulos claimed recently, was providing Mifsud with physical cover close to the U.S. embassy in Rome after Mifsud disappeared from public view following his February 2017 interview with the FBI.

Chaffetz stressed that the dossier, used to obtain four surveillance warrants on former Trump campaign adviser Carter Page, was stated to the FISA court to have been “verified” when in fact, the information was uncorroborated and remains so to this day.

The dossier was funded by the Hillary Clinton campaign and DNC, but the FBI told the court in a lengthy footnote on the original warrant application that the source, Christopher Steele, was reliable and did not disclose the political nature of the dossier’s contents.

Attorney General William Barr told Congress last month that “spying did occur” on the Trump campaign and that he intends to investigate whether or not it was “adequately predicated.”

On MSNBC on Wednesday, where Brennan is a paid commentator, he denied that the CIA “spies” on American citizens, with anchor Nicolle Wallace nodding in agreement.

Former Congressman: Intelligence Community “Did a Lot of This Overseas” added on Wednesday, May 15, 2019