“I AM EXPOSING ALL”

(May 11, 2019) — In a tweet late Friday night, “Deep State Target” author and former Trump campaign advisor George Papadopoulos tweeted that he had just learned that Fox News Senior Judicial Analyst Andrew Napolitano reported on-air on May 9, 2016, that “the Russians” were in possession of emails authored by former Secretary of State and then-Democratic presidential contender Hillary Clinton.

“It has come to my attention that Judge Napolitano was openly discussing the Russians in possession of thousands of Clinton emails on Fox News on May 9, 2016,” Papadopoulos tweeted on Friday. “The day before I met Downer!” referring to then-Australian Ambassador to the UK Alexander Downer, with whom Papadopoulos acknowledges meeting at a bar in London on May 10, 2016.

“So much for the ‘predicate’! I am exposing all,” Papadopoulos concluded his tweet.

Last month, Attorney General William Barr testified to members of Congress that in his opinion, “spying did occur” on the Trump campaign, the “predicate” for which he intends to investigate

Given that a 22-month probe conducted by Special Counsel Robert Mueller and 19 left-leaning prosecutors found insufficient evidence to conclude that anyone within the Trump campaign “colluded” with Russia to win the election.

On October 21, 2016, the first of four FISA warrants was obtained on Trump informal advisor Carter Page, who was described in an uncorroborated “dossier” presented to the court as evidence as a Russian-government agent. Page was never charged with a crime and reportedly testified to Mueller’s team during the course of its investigation.

The meeting between Papadopoulos and Downer reportedly became the catalyst for the FBI’s counterintelligence investigation into the Trump campaign based on Papadopoulos’s alleged mention to Downer of the Russians’ alleged possession of Clinton’s emails.

Both in his book and in numerous interviews over the last 6+ months, Papadopoulos has said he does not recall mentioning “emails” during the conversation, in which he said Downer was overtly hostile and held up, then placed his phone on the table as soon they began to speak, a detail he included in his closed-door testimony to members of the House Judiciary and Oversight Committees last year. 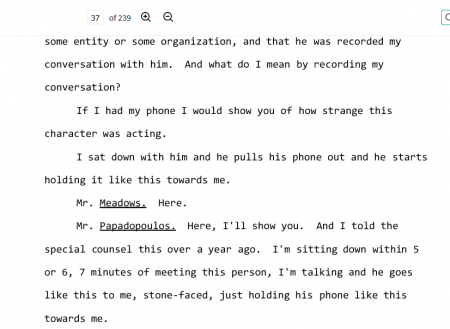 While Downer, who in 2006 arranged for a $25 million donation from Australia to the Clinton Foundation, has denied recording Papadopoulos, members of Congress who heard closed-door testimony from more than 50 witnesses repeatedly asked Papadopoulos if he knows of a “transcript” of the conversation with Downer or others who approached him about his work for the Trump campaign.

On April 18, Papadopoulos tweeted that a transcript of the meeting with Downer exists. 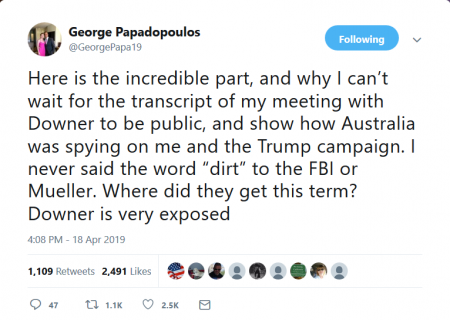 Downer reportedly went to Australian authorities about Papadopoulos’s alleged claim about Clinton’s emails after WikiLeaks began releasing batches of the communications in late July 2016.  From there, Australian intelligence reportedly communicated the information to the FBI, which says it launched its “Crossfire Hurricane” counterintelligence probe into the Trump campaign on July 31, 2016.

Neither candidate Trump nor any of his campaign surrogates was reportedly provided a “defensive briefing” specifically on alleged Russian “collusion” attempts.

WikiLeaks founder Julian Assange, who is now in a London jail for skipping bail more than seven years ago, has repeatedly said his organization did not acquire the emails from Russia or any “state party.”

According to John Solomon of The Hill and House Intelligence Committee ranking member and former chairman Devin Nunes, an Obama-White House plan to cripple the Trump campaign began much earlier.  Nunes has also claimed that former FBI Director James Comey was “spying on the President.”

Prior to the May 10, 2016 meeting, arranged at Downer’s request, Papadopoulos said he was told on April 26, 2016 by a Maltese professor, Joseph Mifsud, who he now believes was working for the FBI and possibly other Western intelligence agencies, that Russia had “dirt” on Hillary Clinton.

The Mueller report claims that Mifsud “had connections to Russia” (p. 14) but Papadopoulos states in his book that despite numerous promises by Mifsud to introduce him to prominent Russian officials in the hope of arranging a meeting between then-candidate Trump and Russian President Vladimir Putin, nothing ever materialized.

Papadopoulos notes his meeting with Downer as May 10, 2016, while page 15 of the Mueller report expresses it as “the first week of May 2016,” at the same time obscuring Downer’s identity.

On April 19, The Daily Caller reported:

Special counsel Robert Mueller alleges in his report on the Russia investigation that Mifsud lied to the FBI about the timeline of his contacts with George Papadopoulos, the Trump campaign adviser whom the FBI claims was the catalyst for the bureau’s collusion investigation…

Also on Thursday, an Italian newspaper revealed that after Mifsud was first linked to Papadopoulos, he allegedly went into hiding for months, living at a Rome apartment owned by Link International. The company controls Link Campus, a university in Rome that partners closely with Western intelligence agencies. (RELATED: Here’s What Mueller Found (Or Didn’t Find) On Collusion)

The developments raise several questions about Mifsud, including whether he is more closely affiliated with Russia or with the West.

It is also not clear why Mifsud was not charged in the Mueller probe.

Papadopoulos said he never mentioned Mifsud’s claim to anyone other than Greek Foreign Minister Nikolaos Katzias during a face-to-face meeting with him on May 26, 2016 (Location 1085 of 2942 in Kindle edition of “Deep State Target”).

In contrast, in October 2017, Papadopoulos accepted a plea agreement with the U.S. Department of Justice for lying to the FBI about the timing of his meetings with Mifsud, the first of which occurred in Rome in March 2016, according to Papadopoulos’s book. Although the now-31-year-old considered withdrawing the plea agreement in light of what he said was new information he later discovered, he ultimately went forward with it, serving 11 nights in federal prison amid the additional requirements of paying a $10,000 fine and performing 200 hours of community service.

On May 2, Papadopoulos’s repeated claim of individuals dispatched by the U.S. intelligence community to gather information from him on the campaign was supported in a New York Times article, although Papadopoulos believes that “Azra Turk” was sent by the CIA, not the FBI, as The Times reported.

During a “town hall”-type discussion on Thursday night hosted by CNN’s Anderson Cooper, Comey claimed that the agency’s Trump-campaign probe was done properly. “The FBI doesn’t spy to begin with; the FBI investigates,” Comey said.

In a recent interview with Sky News, Downer agreed.  “The’s FBI’s not — it’s not quite like the Australian Federal Police. It’s not a spy agency. That’s sort of confusing the FBI with the CIA. I mean, why would the FBI be spying on any campaign? It seems so improbable, doesn’t it?” Downer is quoted by The Examiner as having said.

An article published at Lifezette dated May 11, 2016 refers to Napolitano’s statements made to then-Fox News anchor Megyn Kelly on “Monday,” which would have been May 9, the day before Papadopoulos said he met with Downer at the Kensington Wine Rooms.  “There’s a debate going on in the Kremlin between the Foreign Ministry and the Intelligence Services about whether they should release the 20,000 of Mrs. Clinton’s emails that they have hacked into,” Napolitano is quoted as having told Kelly.

Video of the broadcast was not located on YouTube by this writer.  On the same evening, Kelly announced a “much-anticipated sit-down” with Donald Trump, who at the time had won the Republican primaries after clashing with Kelly over her style of questioning at a 2015 debate.

A “Fox News Insider” article summarizing a portion of what Napolitano told Kelly on May 9, 2016 does not mention “Russia,” and a link to a presumed video of the exchange now yields a “Page Not Found” error.

Did George Papadopoulos Just Prove the FBI Lied? added on Saturday, May 11, 2019

2 Responses to "Did George Papadopoulos Just Prove the FBI Lied?"