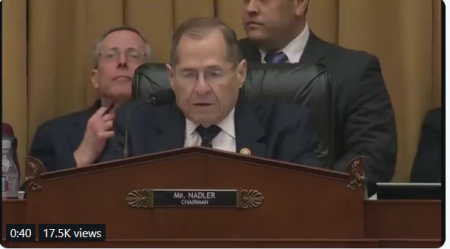 (May 8, 2019) — At approximately 10:00 AM Wednesday, the U.S. House Judiciary Committee, led by Chairman Jerrold Nadler (D-NY10) began debating whether or not to hold Attorney General William Barr in “contempt of Congress” for failing to respond to its subpoena for the full “Mueller report” on Russian interference in the 2016 election and Trump-Russia “collusion.”

A press release on the hearing’s purpose is here.

As of 12:30 PM, members of the committee are continuing to voice their views as to whether or not Barr should have responded affirmatively to the subpoena issued last week. The Justice Department has asserted that the committee is demanding materials which federal law precludes from release such as grand-jury testimony and investigational sources and methods.

Just after the committee was gaveled in, the White House asserted “executive privilege” over the unredacted Mueller report, which was released with redactions on April 18 to both Congress and the public.

On Monday, in response to a lawsuit filed by a journalist and an organization, the Justice Department released a second version of the report with greater explanation as to why the redactions had been made.

The Special Counsel statute under which Robert Mueller was hired to complete the FBI’s “Russia” investigation states that upon completion of an investigation, a “confidential” report is to be delivered to the attorney general. In this case, Barr decided that because of the high level of public interest in Mueller’s findings, he and Deputy Attorney General Rod Rosenstein, who hired Mueller, would review the report in coordination with the U.S. intelligence community to decide which information should be redacted.

After 22 months of investigation, Mueller and his team concluded in March that no one in the Trump campaign collaborated with Russian operatives to affect the outcome of the 2016 presidential election. As for the allegation of “obstruction of justice,” an element Rosenstein added in a second “scope” memo dated August 2, 2017 which remains itself partially redacted, Mueller reached no conclusion.

Barr and Rosenstein then concluded insufficient evidence existed to contemplate bringing a charge against the president for obstruction.

Democrats have seized upon those decisions, fueled by Mueller’s unusual disclosure of executive-branch conversations among the president’s top advisers, to say that there is ample evidence of obstruction on Trump’s part.  “The Trump Administration, and its enablers, may brazenly try to cover up the misdeeds uncovered by the Special Counsel, but on this Committee we will represent the American people and ensure the truth is known,” Nadler wrote in Wednesday’s press release.

The White House asserted no executive privilege over the Mueller report prior to Wednesday.

During the committee hearing, Democrats generally asserted that the Trump administration has violated the law and acted outside of its authority and that Congress has the constitutional duty to oversee the Executive branch of government.

Conversely, some Republicans argued that Justice offered for review in a classified setting a less-redacted version of the report of which reportedly no Democrat has availed him- or herself.

For his part, Barr has pledged to investigate the origins of the Trump-Russia probe, begun by the FBI at some point in 2016 or perhaps before, to ascertain whether or not it was properly “predicated.” In testimony last month to two congressional subcommittees, Barr stated that he believes “spying did occur” on the campaign.

According to Fox News just after noon, a committee vote is expected “any time.”

Update, 7:14 p.m. EDT:  Later this afternoon, the House Judiciary Committee voted in a party-line vote, 24 to 16, to hold Barr in contempt. It is unclear as to when the full House will vote on the resolution.