Trump: FISA and Other Documents to be Declassified “Soon”

WHAT HAS HAPPENED TO THE “RUSSIA HOAX”? 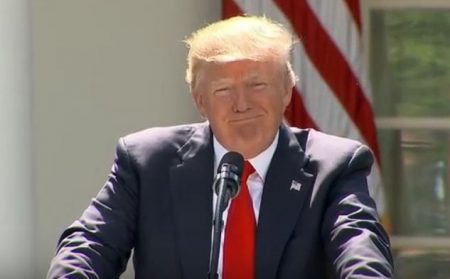 (May 2, 2019) — In a face-to-face interview on Thursday, Fox News journalist Catherine Herridge asked President Trump if he will be declassifying the “302s,” or FBI interview summaries, and other classified information emanating form the Russia “collusion” investigation first launched by the FBI during the 2016 campaign cycle.

In a phone interview with Sean Hannity on April 25, Trump indicated that the documents he will ultimately declassify amount to not only the 302s, but much more.  In addition to the FBI reports, there remain at least 20 pages accompanying the FISA warrant applications for former Trump campaign adviser Carter Page which remain redacted.

Another former Trump adviser, George Papadopoulos, has suggested that the 20 pages state that he, former Trump campaign manager Paul Manafort, Page and Lt. Gen. Michael Flynn (Ret), who became Trump’s first national-security adviser, were the subjects of FISA warrants, a claim not yet confirmed by the intelligence community or the White House.

Papadopoulos has for months been claiming that he was approached by no fewer than six operatives who in retrospect, he believes were surveilling him and ultimately “framed” him.  In September 2017, Papadopoulos took a “guilty” plea for lying to the FBI about the timing of at least one of the meetings resulting from a contact from Maltese professor Joseph Mifsud, who Papadopoulos says was working for the FBI at the time.

A transcript of a closed-door interview between Papadopoulos and members of Congress last fall indicates that at least some congressmen believed records exist of conversations Papadopoulos had while he was working in Europe in 2016 and was approached by Halper, Mifsud and others about the campaign, his work in the energy business, and possible Russian liaisons.

Earlier this week Trump tweeted that the UK assisted the U.S. intelligence community in collecting information on his campaign, a comment Papadopoulos cited in an interview with Tucker Carlson on Thursday evening.

In an abrupt turn of events, The New York Times reported Thursday morning that a woman calling herself “Azra Turk” was “posing as an assistant” to Cambridge University professor and FBI contractor Stefan Halper when she contacted Papadopoulos in London in 2016 and asked him, “Is the Trump campaign working with Russia?”

Allegations that the Trump campaign was “colluding” with Russia to win the election gave way to the FBI’s counterintelligence investigation, later assumed by Special Counsel Robert Mueller in May 2017.  After 22 months, Mueller’s report last month indicated that no evidence of a conspiracy between any American and Russia was discovered.

Earlier Thursday, Papadopoulos praised The Times for its article, although he said that “Turk” was dispatched by the CIA, not the FBI.

In recent shows, Hannity has said “an avalanche” of new information on the Russia “hoax” is forthcoming in the near future.

Trump: FISA and Other Documents to be Declassified “Soon” added on Thursday, May 2, 2019