Hannity: “An Avalanche is Coming” 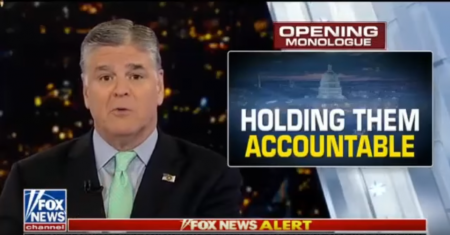 (Apr. 10, 2019) — On Tuesday night’s “Hannity,” host Sean Hannity began by saying that in regard to exposing malfeasance within the U.S. intelligence community connected to the Trump-Russia “collusion” narrative, “an avalanche is coming.”

The FBI has reported that on July 31, 2016, it opened a counterintelligence operation into the Trump campaign on the suspicion that one or more aides were improperly collaborating with Russian operatives to affect the outcome of the election.  Any intelligence relied upon to justify the opening of the investigation has not been made public, although former House Intelligence Committee Chairman Devin Nunes has said on many occasions that none existed.

Nunes has also said that he believes the investigation into the campaign began much earlier than the FBI has claimed, perhaps as early as “late 2015.”

On Tuesday, former Trump campaign adviser George Papadopoulos tweeted that he was under some type of surveillance in 2015, which he said led to a formal FISA warrant to collect his communications in 2016. In September 2017, Papadopoulos pleaded “guilty” to lying to the FBI about the timing of a meeting he had with Maltese professor Joseph Mifsud, who Papadopoulos says is now being “hidden” by the Italian government.

Mifsud reportedly suggested to Papadopoulos in an April 2016 meeting in Rome that the Russians possessed some or all of Hillary Clinton’s discarded emails from her private server.  Following that meeting, then-Australian Ambassador to the UK Alexander Downer reportedly sought out Papadopoulos in London and later claimed that Papadopoulos related Mifsud’s claim about the emails to him.

Downer’s account would become the basis for the FBI’s counterintelligence probe, The New York Times reported on December 30, 2017.

Papadopoulos has written a book about what he said he experienced as a “deep state target” after joining the Trump campaign in March 2016 and perhaps earlier. He was previously an advisor to Dr. Ben Carson’s campaign.

Also on Tuesday, he tweeted, “Deep State Target, my new book, is not a story about me. This is an American story. This is a story about the inner workings of a coup attempt against the president and his team with the help of foreign governments. It’s our duty to expose them.” 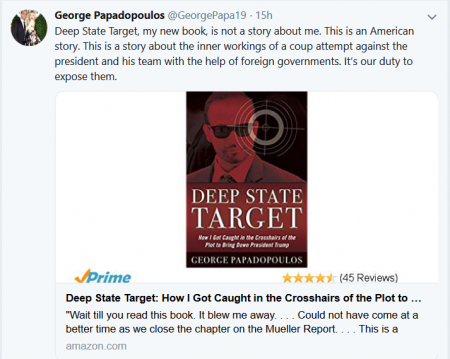 In September 2016, Trump-Russia “dossier” author Christopher Steele told Yahoo! News reporter Michael Isikoff that another Trump campaign adviser, Carter Page, was suspected of being an agent of the Russian government.  A month later, the FBI obtained the first of what would be four FISA warrants on Page, which Page said collected not only his communications, but undoubtedly those of campaign and administration aides closer to Trump and possibly Trump himself.

Isikoff’s article was used in an application the following month the FISA court to surveille Page, along with Steele’s now-infamous “dossier,” which remains unverified.  The warrant was granted, along with three successive ones, without a hearing, the DOJ told government-watchdog Judicial Watch last year.

On March 22, Special Counsel Robert Mueller, who assumed the counterintelligence investigation in May 2017 after FBI Director James Comey was fired, turned in his report to the Justice Department stating that no evidence of Trump-Russia “collusion” was found during his 22-month probe, which indicted more than two dozen individuals and entities for alleged “process” or unrelated crimes.

“Tonight we are making real, significant progress on multiple fronts,” Hannity continued Tuesday night, in “holding them accountable.”  He cited the “criminal referrals” Nunes said he and his colleagues are making this week to Justice of as-yet-unnamed FBI and DOJ officials who allegedly lied to Congress, participated in a conspiracy to derail the Trump campaign and administration, and/or leaked to the media.

During a hearing on appropriations Tuesday morning, Attorney General William Barr said his office is opening an investigation into the origins of the FBI’s counterintelligence probe into the Trump campaign, a statement Hannity highlighted early in the show.  Barr is scheduled to testify to a parallel Senate subcommittee on Wednesday.

Despite Barr’s announced Mueller findings of no “collusion,” House Intel Committee Chairman Adam Schiff (D-CA) and other congressional Democrats have insisted that collusion occurred and have pledged to continue investigating Trump in other areas.  Last year Nunes declared that committee Republicans concluded no collusion took place, followed by the Senate Intelligence Committee.

Hannity claimed that “302s,” which are the FBI’s written interview notes associated with the Russia probe, will be released, although he did not say when.  “Today the attorney general Barr is vowing to hold them accountable.  This is key,” Hannity said.

He then played a video clip of Barr’s Tuesday Capitol Hill appearance in which Barr said he was in the process of “reviewing the conduct of the investigation and trying to get my arms around all the aspects of the counterintelligence investigation that was conducted during the summer of 2016.”

Barr also said that DOJ Inspector General Michael Horowitz is expected to release a report in May or June as to the DOJ/FBI’s obtaining of FISA warrants in 2016 relative to the Russia probe. Papadopoulos claims that not only was Carter Page surveilled, but also Lt. Gen. Michael Flynn, Trump’s first national security advisor; short-term Trump campaign manager Paul Manafort; and Papadopoulos himself.

Hannity then reported that Barr is forming a “team” to investigate the FBI’s 2016 actions.  “The pendulum is swinging; the boomerang is now headed right back at the top; deep-state actors, they will all be held accountable,” [sic] Hannity said.

2 Responses to "Hannity: “An Avalanche is Coming”"